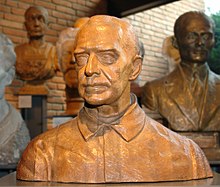 The Focke Museum is as Bremer State Museum of Art and Cultural History , the historical museum of the city of Bremen . The modern main building, supplemented by buildings from the 16th to 19th centuries, is located in a 4.5 hectare park in the Riensberg district of Bremen .

The collections are the result of the merger of the commercial museum, which opened in 1884, with the historical museum that was established in 1900.

The trade museum itself had developed from the technical institute for tradespeople , a historical institution for the qualification of Bremen craftsmen in questions of style and design. A collection of models should give you clear examples from all areas of the arts and crafts. So in 1884 the whole institution was named trade museum . Its first directors August Heinrich Töpfer (1872–1903) and Emil Högg were architects and practicing designers.

Sculpture cornucopia at the entrance: reference to the rich museum holdings

The Historical Museum was originally a private initiative of the Bremen Senate Syndicate Johann Focke (1848–1922, the father of aviation and helicopter pioneer Henrich Focke ). In addition to his work, he had compiled a city ​​history collection since 1880 , which was exhibited in 1900 as the “Historical Museum” in the cloister and refectory of the former St. Catherine's Monastery in the center of Bremen. Thanks to gifts from the population, the museum grew quickly and required more space. In 1905 the collection moved temporarily to an extension of the Bremen Cathedral and in 1913 to Grossenstrasse in the Stephaniviertel, in the baroque building of a former old people's home in the far west of Bremen's old town. On the occasion of Focke's 70th birthday in 1918, the facility was renamed the Focke Museum for Bremen Antiquities .

The long-discussed merger was realized by Ernst Grohne , a prominent cultural scientist with wide-ranging interests, who ran the museum from 1924 to 1953. In 1927 the newly designed house opened its collections on Grossenstrasse, which, in addition to a tour of the city's history, also set regional accents in the stylistic and handicraft departments.

Prehistoric and early historical groups of objects were added, which Grohne had been enriching since 1931 with artefacts from his own excavations. On October 10, 1939, a few days after the outbreak of war, the museum was closed, the holdings were largely relocated and thus mostly saved, while the building itself was completely burned out in a bomb attack.

The Focke Garden was laid out in its place in the 1950s . 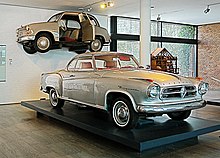 Electronics in the show magazine 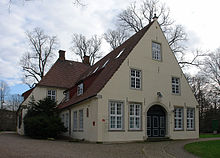 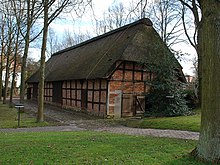 In 1953 the Focke Museum was set up in the main building of an 18th century estate. In 1959, the foundation stone for the first new building of a state museum after the Second World War in the Federal Republic was laid on the site. The new building complex designed by architects Heinrich Bartmann and Reinhold Kargel from Darmstadt was inaugurated in 1964. This building in the style of classical modernism , which blends carefully into the landscape and emphasizes the external reference through glass fronts, is today one of the most high-quality buildings in Bremen from the 20th century. The basic idea and some details are clearly inspired by the Danish Louisiana Museum of Modern Art . With its simple appearance and the level, transparent construction, its architecture met the cultural-political demands that arose in those years for a "reduction of the fear of thresholds". The Association of German Architects certified the new building in 1974: "The Focke Museum can be described as one of the most beautiful museum complexes on the continent."

The entire facility in the spacious park includes four historic buildings, the modern main building and the show magazine built in 2002.

The building was modernized from 1996 to 1998 and then reopened with a newly designed permanent exhibition on the more than 1200-year history of Bremen. From the excavation finds from the Middle Ages to the reconstruction after the Second World War, with large objects - from the Roland head , the sandstone figures from the town hall , Bremen House , Borgward cars, machines from the silver goods industry and models from shipbuilding of the 20th century - to the curious complimentarius and the 3 mm large Bremer Pfefferkorn from the beginning of the 13th century, the first archaeological find of this herb north of the Alps.

As the youngest building in the museum, the foam magazine was inaugurated in 2002. The cube-shaped building, green with its copper cladding, was designed by the Bremen architect Gert Schulze . The museum gained an additional two thousand square meters of exhibition space through this extension. The museum's magazine is located on three of the four floors, two of which are accessible to visitors as a show magazine. One floor serves as a special exhibition room. A glass corridor connects the building with the main building.

Show magazines found their audience as early as the 16th century. The museum itself describes the innovative concept developed in the Focke Museum as unique in Europe. Hitherto hidden holdings of the museum are made accessible to the public on two floors and explained on multimedia stations. Here the collections are presented in their diversity from all areas of art and cultural history, in contrast to the light presentation in the other exhibition areas. There are also offers to play and try out.

The former rescue cruiser Paul Denker is on display in the courtyard between the main building and the showroom . The German Society for the Rescue of Shipwrecked People (DGzRS) used him until his decommissioning in July 2005 .

The Riensberg house, built in the second half of the 18th century, was the manor house of the former Riensberg estate . It has been used by the Focke Museum since 1953 and has been a listed building since 1973. The exhibition areas of Bremen's home decor, European glass art and the children's museum with the toy collection can be seen in it.

Furniture from the 16th to the 20th century is a focus of the exhibited objects. The "Room of a Young Woman" designed by Heinrich Vogeler in 1906 is a total work of art in German Art Nouveau . Some furniture designed by Rudolf Alexander Schröder is on display in the adjoining room .

Studio Focke, an experiment room for children and young people, has been located in the top floor of the house since October 2007.

In the thatched former barn of the Riensberg estate is the department for prehistory and early history, which takes a walk through the cultural development of the region from 350,000 BC. BC to the 8th century. These include evidence of Stone Age farming cultures, finds from excavation or gravel work in the Weser, and grave finds from the Bronze and Iron Ages. The bronze comb helmet from Lesum is unique in Northern Europe .

A special focus is on the Saxon time of Bremen, the most important site is the Mahndorf burial ground .

The house from the Bremen rural area, built in 1586 or 1587, had to give way to the settlement of Klöckner-Werke (now ArcelorMittal Bremen ) in the late 1950s with the entire village of Mittelbüren . It was demolished in 1961 and rebuilt on the museum grounds in 1964. It has been a listed building since 1973.

The exhibition inside makes the farmhouse visible as a source of history by means of its structure, spatial structure and many traces of use, deals with life and work in Mittelbüren and Niederbüren in the fields of house building, agriculture , flax processing , seafaring and river fishing, and deals with industrial settlement in Bremen Land area.

According to the inscription , the barn built by Johann and Tebke Böschen on a farm in Tarmstedt in 1803 was moved to the museum grounds in 1973/74. It houses farm equipment and represents the areas of rural work out how livestock , field order , hay production , dairy industry , slaughter house , rural transportation, beekeeping and peat extraction .

Kiefert's Wurstpavillon , which stood on Bahnhofsplatz until 1998 , has been owned by the museum since August 2016 . The sales pavilion was planned in 1931 by the Bremen architect Eberhard Gildemeister . The museum lent the building to an investor for seven years for use in Markthalle Acht in the former Bremer Bank am Domshof . After the loan period has expired, the pavilion will be set up in the museum's outdoor area.

Conceived as a "museum in the park", the various houses are located in the 4.5 hectare site and are connected to one another by the gardens with their sculptures and sundials. Its oldest elements are four high linden trees in front of the Riensberg house, which were probably planted when this building was renovated in 1768, and the marble figure of Terra; she has been decorating the park around the estate since 1810. The variety of plants with numerous botanical peculiarities and the cottage garden in front of the Mittelbüren house with local flowers and herbs characterize this park with its watercourses.

Open-air concerts are held in the park in the summer months.

The Oberneulander mill , a gallery Dutchman , as a branch of the museum, offers a tour of the inside of the mill, the permanent exhibition From Grain to Bread and a museum educational program.

The permanent exhibitions with exhibits on the history and cultural history of the city as well as archaeological finds are complemented by special exhibitions on topics of the city's history, handicrafts and design, photography and art.

Guided tours for different age groups and lectures are offered.

As early as 1973, Gut Riensberg with Haus Riensberg, the Gutspark and the Franzosentor were listed as a historical monument. The protection was significantly expanded and restructured in 2019: