Emil Högg (born July 5, 1867 in Heilbronn ; † December 27, 1954 in Radebeul ) was a German architect and craftsman , university lecturer in Dresden and a local member of parliament in Radebeul; in old age he was also active as a painter .

Draft for a society house for the 2nd state examination in building construction, 1897

Högg studied architecture from 1886 to 1890 at the Technical University of Stuttgart . Initially he worked in architecture firms known at the time such as Eisenlohr & Weigle (Stuttgart), Bruno Schmitz (Berlin) and Karl Hoffacker (Berlin). After a legal clerkship , he passed the 2nd state examination in 1897 and in the following year got a position as city ​​architect ( assessor ) in the building administration of Berlin under city building officer Ludwig Hoffmann . In 1902 he was promoted to urban planning inspector there . On April 1, 1904, Högg moved to Bremen as director of the newly created trade museum . In the same year he was the founder of the Bremen Association for Lower Saxony Ethnicity . In 1908 he was a member of the jury for the architectural competition to design the market square and a new town hall in Delmenhorst . In 1909 he was the curator of an exhibition for cemetery art with around 80 tombs in the old Doventorsfriedhof in Bremen; he designed numerous tombs himself.

At the instigation of the art historian Cornelius Gurlitt , he was appointed to the chair for spatial art and engineering at the Technical University of Dresden in 1911 , which he held until 1933. 1923 awarded him the Hannover Technical University , the honorary doctorate (Dr.-Ing. E. h.). From 1926 Högg acted as a part-time church construction supervisor for the Thuringia regional church council. At the beginning of the 20th century he turned to homeland security architecture ( Haus Högg ) and became a representative who spoke in the affirmative of National Socialism in the 1930s . In November 1933 he signed the German professors' confession of Adolf Hitler . His most important works are the Ernemannbau in Dresden ( Pentacon ) and the generator building of the Niederwartha pumped storage plant. In the 1930s he ran the Högg & Rötschke architectural office together with Friedrich Rötschke , who received his doctorate from the Technical University of Dresden in 1931 . Together with him, he also built his new house in Radebeul, Hoflößnitzstraße 15. 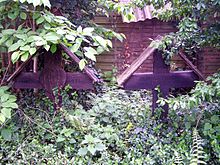 Grave site at the Radebeul-Ost cemetery

Högg was a member of the German Werkbund , in Dresden he joined the artists' association Die Zunft .

From 1912 Högg lived in Radebeul in a house he designed himself in Högg (Marienstraße 12a). Also in 1912 he received an order from the Association for the Rescue of the Hoflößnitz to restore the entire complex. From 1918 he was a local politician in Radebeul and a member of the building committee. After his architectural office in Dresden was destroyed in 1945, Högg worked in the Grundhof in the Niederlößnitz district of Radebeul . There he also devoted himself to painting as an old work, he created numerous Lößnitz pictures. Högg was an honorary member of the Arminia fraternity in the Jena castle cellar (1923). 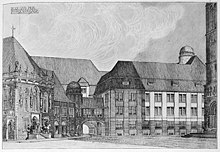 Competition design for the new town house in Bremen, 1908