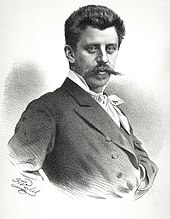 Gabriel Seidl was the first son of Therese Seidl, daughter of the beer brewer Gabriel Sedlmayr , and her husband, baker Anton Seidl. He first studied mechanical engineering at the Munich Polytechnic and worked for some time as a mechanical engineer in England. There he discovered that his real talent lay in the field of architecture, studying architecture at the Munich Academy (interrupted by a war deployment as a volunteer in the war of 1870/71). During his studies he joined the Corps Germania in 1866, as did his cousin Gabriel von Sedlmayer later . As the architect of the corp house, his portrait adorns the vestibule of the corp house together with that of Sedlmayer, the main financier.

After a long study visit to Rome, he opened a studio for interior decoration in 1878. Seidl became a member of the Münchner Kunstgewerbeverein founded in 1851 and quickly found the appreciation of the associated artists: u. a. Lorenz Gedon , Rudolf von Seitz and Fritz von Miller . By being awarded the Bavarian Order of the Crown , he was raised to the nobility in 1900 and in 1908 made a knight of the order Pour le Mérite for science and the arts . In 1902 he founded the Isar Valley Association in the Künstlerhaus , in order to prevent further destruction of the Isar Valley by soil and building speculators after the Isarwerke's first power plants were built .

Among other things, Seidl dedicated himself to building palaces. In 1885 the new Büdesheim Palace was built according to his plans . In 1894, Seidl was commissioned by Kaiser Wilhelm II to deal with a possible reconstruction of Hohenzollern Castle in the purist style of historicism. However, after a visit to the castle, Seidl renounced the assignment with the words: “This castle is so botched that I can't do anything but build it from scratch - and then it's just no longer an old castle ... I can't do that! ". Seidl, who had renounced this important commission, rebuilt their castles for other clients in the following years, for example the moated Schönau castle from 1899–1900 . Seidl died in 1913 in his residential and office building in Munich, Marsstrasse 28.

In 1890 Seidl married the forester's daughter Franziska Neunzert, and the marriage had five children. His brother Emanuel von Seidl was also an architect and is known for his numerous private residential buildings as well as for representative buildings, such as the Gärtnerplatz Theater in Munich or the buildings of the 1910 World Exhibition in Brussels. After Gabriel's death, his brother Emanuel continued his plans at the Deutsches Museum until 1919. The sister Therese married the landscape painter Konrad Reinherz for the second time .

Gabriel von Seidl is the namesake of the Gabriel-von-Seidl-Gymnasium in Bad Tölz . In Bremen, Graefelfing, Grünwald, Nuremberg, Pullach and Worms streets or squares were named after him. In 1922, the Isar Valley Association erected a memorial column for him in Pullach .