Municipal gallery in the Lenbachhaus 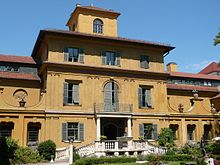 The Lenbachhaus - new wing, in November 2012 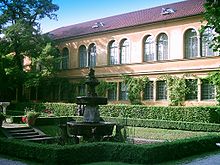 The north wing of the building complex

The Städtische Galerie im Lenbachhaus is an art museum in the Bavarian capital, Munich . It is housed in the Lenbachpalais, the listed villa of the "painter prince" Franz von Lenbach at Luisenstrasse 33 in the Munich art area ( Maxvorstadt ). The villa was built between 1887 and 1891 according to plans by Gabriel von Seidl and extended by Hans Grässel from 1927 to 1929 and by Heinrich Volbehr and Rudolf Thönessen from 1969 to 1972 . Some rooms have been preserved in their original state and can be viewed as part of an exhibition visit.

It was opened in 1929. From 2009 until it reopened on May 8, 2013, the Lenbachhaus was completely renovated and an extension by the architectural office Foster + Partners was added.

The lenbachhaus is part of the Munich Art Quarter in the Maxvorstadt . Here, 18 museums and exhibition halls as well as around 40 galleries and six universities can be reached on foot.

The museum belongs to the MuSeenLandschaft Expressionism , together with the Museum of Fantasy (“Buchheim Museum”) in Bernried am Starnberger See , the Franz Marc Museum in Kochel am See , the Museum Penzberg and the Murnau Castle Museum .

In 2012, the Munich Christoph Heilmann Foundation and the Städtische Galerie im Lenbachhaus agreed to work closely together; around a hundred works from the foundation were given to the Lenbachhaus. In addition to the Munich School, the Dresden Romanticism and the Berlin and Düsseldorf School are now also shown in characteristic individual examples. The connection with the Barbizon painters in France , which can be shown for the first time, is particularly important . The Lenbachhaus now has a major work by Gustave Courbet , who first exhibited in Munich in 1851.

In addition, works of the New Objectivity with works by Christian Schad , Rudolf Schlichter and others can be seen.

Since 1979 the Lenbachhaus has also been buying contemporary art that is only indirectly connected to Munich. Central pieces are the environment show your wound by Joseph Beuys , which became the center of a Beuys collection from the Lothar Schirmer collection . Joseph Beuys' bathtub is also part of this collection . In 1996 the atlas , the autobiographical collection of sketches and materials from Gerhard Richter , was acquired. 2015 came The shop of Hans-Peter Feldmann added, around which the contemporary art under the theme So one thing I must have been rearranged.

The Lenbachhaus owns 28,000 works of art (as of 2016). Of the works that were created up to 1900, only one percent was done by women. If you take into account all works up to the end of World War II, you get a share of six percent, from 1946 to 2015 the stock increased slightly to eleven percent. 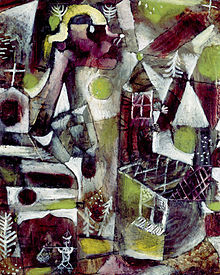 A key point of the Washington Declaration is the restitution of Nazi-looted art . Subsequently, in October 1999, the Culture Committee of the City of Munich decided to support research into Jewish art in the city's museums. The Lenbachhaus also conducts provenance research on works that were created before 1945 and entered the collection after 1933. However, until 2009 there was only one part-time employee available for this research. As of 2009 there were two returns of paintings (2003: Slevogt “Trabrennen in Ruhleben” and 2009: Kanoldt “Kreuzjoch”). As part of the packaging of files before the general renovation of the museum, these were increasingly evaluated for the history of acquisitions. In 2012 three works on paper, in 2016 a bundle of eight works on paper from the 19th century (ex Siegfried Lämmle) and in 2019 a bundle of 16 drawings by Alfred Kubin were returned to the heirs. The Lenbachhaus then bought back the paintings by Slevogt and Kanoldt and the Lämmle bundle from the heirs.

Since 1992, the heirs have been involved in a legal dispute with the city of Munich over the publication of Paul Klee's swamp legend . In 2013 negotiations began, which in 2017 led to an agreement, according to which the picture remained in the possession of the Lenbachhaus after a monetary payment. The dispute over the painting Das Bunte Leben , which is considered to be one of Wassily Kandinsky's main works, attracted national attention and was not decided as of early 2020.

Entrance hall of the Lenbach Villa (2007)

Changing exhibitions take place in some of the rooms. Since the 1970s, the museum began to present essential trends and artists of the international contemporary art scene in its exhibitions and to collect current art. With its new acquisitions, the museum focuses on works by individual artists in order to present them in groups of works. An important acquisition in 1980 was the installation show your wound by Joseph Beuys .

The exhibition Sheela Gowda . It .. Matters had to be opened exclusively online for the first time due to the COVID-19 pandemic and can only be viewed on the internet until the museum reopens .

History of the house 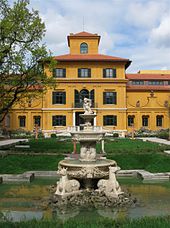 The place where Franz von Lenbach had his villa built was deliberately chosen by him. Directly opposite the classicist Königsplatz with the Propylaea, he created a residence that he wanted to turn into a center of art in Munich. “I intend to build a palace that will overshadow what has been there; the powerful centers of European great art should be connected there with the present ”- said Lenbach in a letter in 1885. The art patron Adolf Friedrich von Schack , the poet Paul Heyse and other artists and art lovers had settled in the neighborhood .

The villa, which he designed together with the architect Gabriel von Seidl , had an L-shaped floor plan, with a studio building on Brienner Strasse, which was completed in 1888, and the main building, which was completed in 1890. A garden divided by fountains was laid out in front of the two buildings. The building and garden, a late bloom of historicism , are largely modeled on the Italian Renaissance, with many decorative elements based on ancient models. It is possible that Lenbach was also influenced by the residence of Peter Paul Rubens in Antwerp, which he had visited in 1877.

The rich interior decoration included ancient sculptures, medieval paintings, tapestries and carpets, but also copies of ancient works of art. In 1892 the decommissioned Chancellor Otto von Bismarck received the ovations from the Munich population from the balcony of the villa.

In 1900 the studio and main building were connected to one another by a harmoniously inserted intermediate wing.

Establishment and growth of the municipal picture gallery

Franz von Lenbach died in 1904. His widow Charlotte ( Lolo ) von Lenbach sold the house to the city of Munich in 1924. After the negotiations were concluded, she donated a large number of works of art from the inventory of the house to the city. These pictures, and an extensive inventory of Lenbach's paintings, formed the basis for a new urban gallery.

One year after the villa was bought, the city made a sum of money available for the purchase of further works of art, which doubled in the following years. The city had the architect Hans Grässel build another wing of the building, the north wing opposite the studio wing. Grässel decided on a restrained, historicizing design language, adapted to the style of the other building wings. In 1929 the new Lenbachhaus was opened to the public. 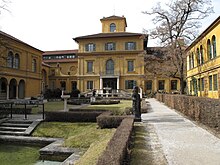 The Lenbachhaus immediately before the extensive renovation and expansion (January 2009)

Large parts of the house were destroyed in the final years of the war in 1944/1945. After a quick reconstruction, exhibitions could be shown again in the north wing in 1947. In 1952 the interior of the studio building was renewed, and then the skylight halls in the northwest were restored.

On February 19, 1957, on her 80th birthday, Gabriele Münter donated a large part of the life's work of her partner Wassily Kandinsky to the city : more than 90 oil paintings, more than 330 watercolors and drawings, sketchbooks, reverse glass paintings, as well as most of his graphic works . There were also 25 paintings, many drawings and graphics by Münter himself, as well as a collection of photographs by the artist couple and their friends. In addition, many works by artist friends such as Alexej von Jawlensky , Franz Marc , August Macke and Marianne von Werefkin were part of the donation. In one fell swoop, the house became a museum of world renown.

Further pictures by Macke, Jawlensky, Marc and Jean-Bloé Niestlé came into the gallery's possession in 1965 through the Bernhard Koehler Foundation . With the funds of the Gabriele Münter and Johannes Eichner Foundations, additional works by the main representatives of the Blue Rider and classical modernism could be purchased in the following years .

In 1971 the Kubin archive of the Hamburg collector Kurt Otte was purchased. In addition to works by Alfred Kubin , it contains extensive correspondence with avant-garde artists. 1969–1972 an extension was created in order to be able to present the strongly grown collection appropriately.

In 1996, some rooms in the center of the first floor in the central building were restored. With precious fabric wallpapers, wooden ceilings and dark pictures, they convey an impression of Lenbach's decorative art in their black and red - and an impression of the era from which the artists of the budding modernism wanted to break away.

The entrance to the Kunstbau, in April 2007

In 1994 the possibilities of the gallery in the Lenbachhaus were significantly expanded with the opening of the art building. The spacious exhibition area is located in a previously unused part of the mezzanine floor of the Königsplatz underground station very close to the Lenbachhaus and is used for large temporary exhibitions, mostly modern or the latest art.

When the underground subway station was built, an empty space of the same size was left above the station. The 110-meter-long, slightly curved room, divided into two areas by a row of central columns, was expanded into a branch of the Lenbachhaus between 1992 and 1994 by the architects Kiessler + Partner (Munich) on behalf of the City of Munich. The previously closed front sides were given shop windows to the escalators of the underground station. From the mezzanine floor of the underground station, visitors enter the foyer of the Kunstbau and from there via a ramp leading down to the exhibition space. A freight elevator was installed on the neighboring property of a municipal vocational school to transport the works of art. The atmosphere of the exclusively artificially illuminated exhibition space is determined by the raw concrete surfaces of the supports and the ceiling in combination with a maple parquet floor and white wall shells, behind which the duct system of the ventilation technology is hidden. An accent in the structure of the exhibition space is the round room for multimedia presentations, which is accessible via a staircase and which appears to float in the middle of the western area.

The artificial structure was awarded the “ BDA Prize Bavaria” in 1995 as a “timeless architectural work” .

The Lenbachhaus cube was opened in the Petuelpark in mid-2005 . In the cube, art magazines, free exhibition rooms and academy classes had the quarterly opportunity until the beginning of 2011 to curate this exhibition room at the invitation of the Lenbachhaus and to create an accompanying program.

The Städtische Galerie im Lenbachhaus was closed from the end of February 2009 to May 2013 due to extensive renovation and conversion work. Exhibitions continued to take place in the Kunstbau and Kubus. In 2009 work also began on an extension by the British architects Foster + Partners . It also contains a lobby that functions as a new reception area for the collection and exhibition rooms.

The Lenbachhaus is one of the first museums to be illuminated exclusively with light-emitting diodes and daylight. The artificial light enables daylight to be imitated as well as light bulbs. The lighting was funded by the BMBF with two million euros.

The educational program of the Städtische Galerie im Lenbachhaus and the Kunstbau is carried out in cooperation with the Munich Adult Education Center, the Museum Education Center and KUKI - Art for Children.

Museums and collections in the Munich art area