John Archibald Wheeler grew up in a Unitarian home, where his early interest in the natural sciences was particularly encouraged. He received his doctorate in 1933 at Johns Hopkins University under Karl Ferdinand Herzfeld . In a 1937 paper published in Physical Review , he introduced the S-matrix to nuclear physics. In 1939 he studied together with Niels Bohr , the nuclear fission in the fluid model . The year before, Wheeler had become a professor at Princeton University , where he remained until 1976 when he accepted a professorship at the University of Texas at Austin . He kept his office in Princeton. Wheeler was probably one of the last people to know Albert Einstein , Niels Bohr and other greats from the early days of quantum mechanics .

John A. Wheeler was married with three children.

Wheeler devoted himself intensively to teaching and was very successful in it. For example, he and his first-semester student Albert Einstein visited the nearby Institute for Advanced Study . Among his students at the time were well-known theoretical physicists such as the gravitational physicist John R. Klauder and the Nobel Prize winners Kip Thorne and Richard Feynman . With Feynman he worked out a new formulation of classical electrodynamics in 1941 . During World War II, Wheeler worked on the Manhattan Project in Hanford, where plutonium breeder reactors were developed. He was also involved in early attempts to build the hydrogen bomb .

In January 1953, during a train ride from Princeton to Washington, he left secret documents describing the ignition mechanism of the hydrogen bomb in the train toilet. The whereabouts of the document is still unclear, Wheeler remained unpunished because of its importance for the project.

With Kenneth Ford he investigated the semi-classical approximation in scattering theory . In the 1950s and 1960s, Wheeler developed what is known as quantum geometry . By this he understands a further development of the general theory of relativity (GTR), which not only wants to describe gravitation , as with Einstein , but also the other interactions such as electromagnetism through the geometry of curved spacetime . However, it failed because it could not explain important physical phenomena such as the existence of fermions and could not avoid gravitational singularities as hoped . Such a geometrization not only of gravity, but also of the other fundamental interactions - which are described today by gauge theories - has not yet succeeded, and a quantum theory of gravity is still being fought for. 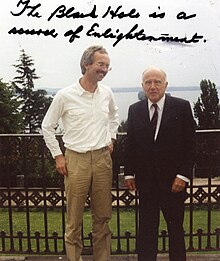 Eckehard W. Mielke (left) with John Archibald Wheeler (right) at the conference for the 100th birthday of Hermann Weyl in Kiel 1985

As an approach for the quantum theory of gravity, he and Bryce DeWitt introduced the Wheeler-DeWitt equation as a wave function of the entire universe. In the late 1960s and early 1970s he played an important role in the then rapidly developing theory of black holes , which he even gave this name in 1967. The name for the no hair theorem , sometimes called bald head in German , also comes from him (“A black hole has no hair”). Wheeler also coined the term " wormholes " for dumbbell-like bridges in spacetime. In 1973 he published the extensive and pedagogically well-thought-out textbook Gravitation with Misner and Thorne . Wheeler was also interested in the interpretation of quantum mechanics and temporarily supported the " Many Worlds Interpretation " of his student Hugh Everett from 1955, before he distanced himself from it.

In 1954 he was elected to the American Academy of Arts and Sciences and in 1952 to the National Academy of Sciences . He was a Fellow of the Royal Society (1995) and a member of the Royal Danish Academy of Sciences (1971). In 1983 he received the Oersted Medal , in 1984 the J. Robert Oppenheimer Memorial Prize , 1982 the Niels Bohr International Gold Medal, 1968 the Enrico Fermi Prize , the National Medal of Science in 1971 , the Wolf Prize in Physics in 1996/97 and in 2003 the Einstein Prize . The American Philosophical Society , of which he was a member, awarded him in 1989 with their Benjamin Franklin Medal . The asteroid (31555) Wheeler is named after him. He was an honorary doctor of eighteen.

The “really big questions” for nature

From his basic Unitarian attitude, John Archibald Wheeler formulated five fundamental questions that go beyond physics and that he called "really big questions":

Wheeler published his memories of Einstein in: Aichelburg und Sexl (ed.): Albert Einstein. 1979, and in the physical sheets from the same year.

“Wheeler's first golden rule: Never do a calculation that you don't know about the result. Before each calculation, make an estimate using simple physical arguments (symmetry, invariance, conservation laws). "

Winner of the Wolf Prize in Physics