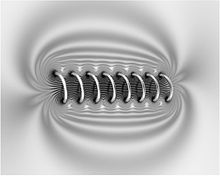 Magnetic field of a solenoid

Hans Christian Ørsted (1820) is considered to be the discoverer of the connection between electricity and magnetism , although Gian Domenico Romagnosi (1802) was his forerunner, which was hardly noticed at the time. The theory of classical electrodynamics was formulated by James Clerk Maxwell in the mid-19th century using the Maxwell equations named after him . The investigation of Maxwell's equations for moving reference systems led Albert Einstein in 1905 to the formulation of the special theory of relativity . During the 1940s it was possible to combine quantum mechanics and electrodynamics in quantum electrodynamics ; their predictions agree very precisely with the measurement results.

and the Lorentz force

With the help of the material equations of electrodynamics, the macroscopic Maxwell equations result. These are equations for the effective fields that appear in matter .

Also play an important role (derived from this):

can by introducing the electromagnetic potentials according to

relates to each other. If one also demands that the same field results from such a transformation , it must be like

and secondly the Lorenz calibration

The electrostatics is the special case motionless electrical charges and static (not changing over time) electric fields. It can also be used within limits as long as the speeds and accelerations of the charges and the changes in the fields are small.

The Magnetostatics deals with the special case of constant currents in a total of uncharged conductors and constant magnetic fields. It can be used for currents and magnetic fields that change slowly enough.

Electromagnetic waves, on the other hand, are the only form of electromagnetic field that can exist independently of a source. Although they are created by sources, they can continue to exist after they have been created regardless of the source. Since light can be described as an electromagnetic wave, optics is ultimately a special case of electrodynamics.

Electrodynamics and Theory of Relativity

In contrast to classical mechanics, electrodynamics is not Galileo-invariant . This means that if one assumes an absolute, Euclidean space and an independent absolute time , as in classical mechanics , then the Maxwell equations do not apply in every inertial system .

Simple example: A charged particle flying at constant speed is surrounded by an electric and a magnetic field. A second particle, flying at the same speed and having the same charge , experiences a repulsive force from the electric field of the first particle , since charges of the same name repel each other; At the same time, it experiences an attractive Lorentz force from its magnetic field , which partially compensates for the repulsion. At the speed of light this compensation would be complete. In the inertial system, in which both particles rest, there is no magnetic field and therefore no Lorentz force. Only the repulsive Coulomb force acts there , so that the particle is accelerated more strongly than in the original reference system in which both charges move. This contradicts Newtonian physics, in which the acceleration does not depend on the reference system.

This knowledge led to the assumption that there is a preferred reference system in electrodynamics (ether system). Attempts to measure the speed of the earth against the ether , however, failed, for example the Michelson-Morley experiment . Hendrik Antoon Lorentz solved this problem with a modified ether theory ( Lorentz's ether theory ), which, however, was replaced by Albert Einstein with his special theory of relativity . Einstein replaced Newton's absolute space and time with a four-dimensional space - time . In the theory of relativity, the Galileo invariance is replaced by the Lorentz invariance , which is fulfilled by electrodynamics.

In fact, the reduction in acceleration and thus the magnetic force in the above example can be explained as a consequence of the length contraction and time dilation , if the observations made in the moving system are transformed back into a system at rest. In a certain way, the existence of magnetic phenomena can ultimately be traced back to the structure of space and time, as described in the theory of relativity. From this point of view, the structure of the basic equations for static magnetic fields with their cross products also appears less surprising.

(These equations are only insignificantly modified in cgs units: Formally, you only have to substitute or with or .)

However, classical electrodynamics does not provide a consistent description of moving point charges; problems such as radiation feedback arise on small scales . The quantum electrodynamics (QED) combines the electrodynamics therefore with quantum mechanical concepts. The theory of the electroweak interaction unites the QED with the weak interaction and is part of the Standard Model of elementary particle physics. The structure of the QED is also the starting point for quantum chromodynamics (QCD), which describes the strong interaction . However, the situation there is even more complicated (e.g. three types of charge, see color charge ).

A unification of electrodynamics with the general theory of relativity ( gravitation ) is known as the Kaluza-Klein theory and represents an early attempt to unify the fundamental interactions .