Royal building of the Munich Residence, seat of the Bavarian Academy of Fine Arts

The Bavarian Academy of Fine Arts in Munich is an association of well-known personalities from artistic life. It is intended to serve as the "supreme foster home of art".

The academy was founded by the Free State of Bavaria as a corporation under public law in 1948, following on from the tradition of the Royal Academy of Arts in Munich, established in 1808.

It is the task of the academy to “constantly observe the development of the arts, to promote them in every way that appears expedient or to make suggestions for their support”, and to “contribute to the intellectual debate between the arts and between art and society perform and stand up for the dignity of art ”.

The academy organizes panel discussions, exhibitions, readings, lectures and concerts. Every year ordinary and corresponding members are elected to the five departments of visual arts , literature , music , performing arts and film and media arts; in addition, honorary members are appointed.

Until 1968 the academy was located in the Prinz-Carl-Palais ; then she was given temporary quarters on Karolinenplatz . Since 1972 it has been housed in the Königsbau of the Munich Residence .

The following prizes and work grants have been or will be awarded by the Academy:

Prices of all departments of the academy

→ Main article : List of members of the Bavarian Academy of Fine Arts 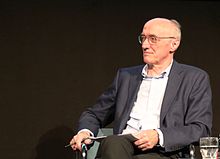