This article is about the architect; for the composer of the same name see Josef Wiedemann (composer) .

Josef Wiedemann (born October 15, 1910 in Munich ; † April 18, 2001 there ) was a German architect . He was a full professor at the Technical University of Munich and a member of the Bavarian Academy of Fine Arts . 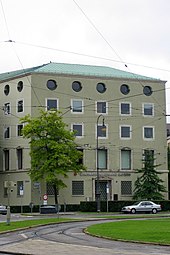 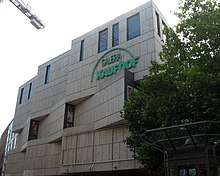 Josef Theodor Wiedemann was born in 1910 into a Bavarian-Swabian family of farmers and craftsmen. After graduating from high school in 1930, he studied architecture at the Technical University of Munich from 1931 to 1935 on the recommendation of Theodor Fischer . His university teachers included German Bestelmeyer and Hans Döllgast , whom he saw as his actual teacher. Even Robert Vorhoelzer and the Munich sculptor Josef Wackerle shaped his career. Josef Wiedemann had been a member of the SS since autumn 1933 .

In 1936, Wiedemann joined the office of the Herrsching architect Roderich Fick as a designer . He was initially responsible for building projects on Obersalzberg (especially Hotel Platterhof) and moved to Linz in 1940 , where Fick had meanwhile been appointed Reich Building Officer for the city of Linz. Until 1944, Wiedemann worked on designs for the so-called Danube Hotel. After one year of military service, he was taken prisoner of war in 1945 and was able to return to Bavaria in 1946.

After denazification (as a follower), Wiedemann founded an architecture office in Munich in 1948. At the beginning of the 1950s he established himself with creative reconstructions as well as the construction of representative commercial buildings and a little later as the master builder of numerous church and community buildings. In 1955 he was appointed professor for design, preservation of monuments and sacred architecture at the Technical University of Munich (later Technical University of Munich ), where he taught until 1976. In 1956 he was elected to the Bavarian Academy of Fine Arts .

Josef Wiedemann was a talented and charismatic teacher. In terms of content, his lessons went far beyond the actual subject areas. In the two decades of his teaching activity, Josef Wiedemann became the pioneer of an entire generation of architects and, together with Johannes Ludwig and Franz Hart , significantly shaped the Munich architecture school.

Wiedemann's main creative period between 1950 and 1975 coincided with the long period of boom in the Federal Republic of Germany. With a high level of professional skill on the one hand and a good sense of trends, with agility and negotiating skills on the other, he established himself with three of the major post-war construction projects in the Bavarian region. In the 1950s and 1960s, he owned one of the largest and probably most renowned architecture firms in Munich. In the 1960s he also took orders to build department stores. The Kaufhof on Marienplatz in Munich is one of his most controversial buildings to this day . His late work on the renovation of the monastery economy in Dießen am Ammersee is therefore characterized by his level-headed, simple, handcrafted architectural language and his empathetic and creative handling of historical buildings.

His estate is in the Architecture Museum of the Technical University of Munich .