"Creative security" of the Alte Pinakothek in Munich: In the middle of the building above the portal, the simplified masonry at the site of the former bomb crater can be seen.

Hans Döllgast was born the son of a couple of village school teachers and grew up in Bergheim and the Upper Old Town of Neuburg an der Donau . Döllgast studied architecture from 1910 to 1914 at the Technical University of Munich ; In 1912/13 he was a volunteer with Michael Kurz. In 1913 he received the university prize for his plans for the reconstruction of the Villa Laurentina by Pliny the Younger . From 1919 to 1922 he worked in Richard Riemerschmid's studio, then from 1922 to 1926 in the studio and in the master class of Peter Behrens in Vienna, Berlin and Frankfurt am Main. From 1927 to 1929 he worked as a freelance architect in Munich, Vienna and Augsburg. In 1929 he received his first teaching position for interior design at the Technical University of Munich. In 1939 he received an extraordinary professorship and in 1943 was appointed full professor at the Technical University of Munich. After fourteen years of teaching, Johannes Ludwig took over his chair in 1957 . After the occupation of Munich by American troops (beginning of May 1945) he was acting rector of the university until the military government appointed Georg Faber for the office.

Döllgast made a name for himself in Munich even before the Second World War with a number of new church buildings (e.g. the parish church of Hl. Blut in Munich- Bogenhausen , 1933/1934) and the planning of the Neuhausen settlement from 1928–1931. After the war, he shaped generations of architects through his work as a professor of architectural drawing and spatial art at the Technical University. For example, the title lettering ( headline ) of the Süddeutsche Zeitung comes from him. In 1958 he became a member of the Bavarian Academy of Fine Arts , in 1957 he was awarded the Federal Cross of Merit .

He was involved in the reconstruction of the Würzburg Cathedral , the Munich Residence and the St. Boniface Abbey in Munich. There he made successful connections between the old stock and the reconstruction (= building in the stock ). The Alte Pinakothek , which was badly damaged by a bomb,   is considered to be one of the first major model projects of critical reconstruction . There he succeeded in an abstract reconstruction in which he closed the outer walls with unplastered rubble bricks in such a way that the bomb damage remained recognizable as an “injury” to the Klenze building . The building structure was preserved by slim steel columns, concrete lintels and cornices. The newly created, spacious staircase is one of the most beautiful staircases in Germany. In 1954/1955 he led the redesign of the Old Southern Cemetery in Munich. He also redesigned the old north cemetery in Munich, which was badly damaged by the war, and saved the All Saints Court Church of the Munich residence from further deterioration by equipping it with a wooden roof.

Hans Döllgast was married to the former athlete Marie Kießling . He found his final resting place in Munich's Ostfriedhof . 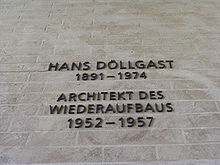 Reference to Döllgast in the foyer of the Alte Pinakothek

Directors, rectors and presidents of the Technical University of Munich