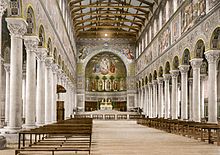 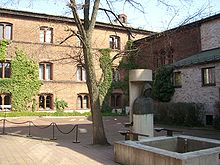 The entrance to the monastery

The St. Bonifaz Abbey is a Benedictine abbey in Munich and belongs to the Bavarian Benedictine Congregation and is located in the Munich art area .

The monastery was founded in 1835 by the Bavarian King Ludwig I , who wanted to revive the tradition of spiritual life by setting up new monasteries. In 1850 the monastery, designed by the architect Georg Friedrich Ziebland , was ceremoniously inaugurated. The entrance to the church served as a model for Leo von Klenze for the design of the Cathedral of St. Dionysius Areopagita in Athens.

During the Second World War , on April 25, 1944 and January 7, 1945, the monastery, located in the immediate vicinity south of Königsplatz , was badly damaged and only partially rebuilt later. The Catholic university community of the Technical University of Munich was housed on the grounds of St. Bonifaz in the 1990s .

St. Boniface is in the city, which is unusual for a Benedictine monastery. In order to provide the monks with material supplies, Ludwig I bought the Andechs monastery, which had been secularized in 1803, including the associated agricultural land, and donated it to the abbey. The Andechs Monastery is now part of the Saint Boniface Abbey.

The monks work in pastoral care in the parish, scientific and educational work, as well as caring for the homeless . The monastery library with a focus on monasticism and theology is one of the largest academic private libraries in Bavaria. The "Haneberghaus" was opened on the monastery grounds in 2001 and is used to help the homeless. The abbot is Johannes Eckert , who was elected on July 23, 2003 by the monks of the convent to succeed the long-serving abbot Odilo Lechner .

The sarcophagi of Ludwig I and his wife, Therese von Sachsen-Hildburghausen, stand in the right aisle of St. Boniface's Basilica .

A competition announced in 1988 enabled the basilica to be artistically designed in the years 1993–1996. The painter Peter Burkart created a frieze of colored panels above the arcades, Friedrich Koller created the relief of the inner portal with the motif of the end times speech from the Gospel according to Matthew . In the left (western) aisle hangs a 15-part sequence of the Stations of the Cross (colored prints by Bernd Hendl, 2015–2017). In front of it stands a saint Elisabeth by Christine Stadler .

After only the bare minimum had been repaired on the monastery building for decades, extensive renovation work began there in spring 2018. A guest wing will also be created.

Well-known members of the Convention

The organ of St. Bonifaz was built in 1976/1977 by the organ building company Manufacture d'Orgues Muhleisen ( Strasbourg ). The instrument has 51 registers and is on the ground floor behind the altar. The disposition is based on the French symphonic organ building of the 19th and 20th centuries; A special feature are the two tongue registers Vox humana 8 'and Cromorne 8', the lengths of which are designed according to Andreas Silbermann . In 2011 the register action / registration system was renewed by Orgelbau Kaps ( Eichenau ).

Monasteries of the Bavarian Benedictine Congregation (after 1858)