Lindenberg in the Allgäu

City of Lindenberg in the Allgäu 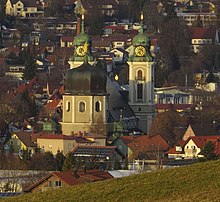 Lindenberg, located on the German Alpine Road , is a recognized climatic health resort and besides Nuremberg has Bavaria's only hat museum .

Landscapes and parts of the municipality

There is only the district Lindenberg in the Allgäu.

The municipality has 9 officially named municipal parts (the type of settlement is given in brackets ):

Lindenberg, which is located at a low-fog altitude, was the sunniest city in Germany in 2006 with 2217 hours of sunshine. In 2009 it was only 1977 hours, but Lindenberg was next to Scheidegg the sunniest place in Bavaria . (The statistically relevant long-term average of sunshine duration, which is the basis for comparisons with other stations, is naturally lower than such peak values ​​for a single year.)

From around 500 BC A few Celts settled in the Allgäu and practiced agriculture . Around the year 15 BC The area was occupied by Roman troops . They expanded the Roman area towards the Danube and later built a Roman road that connected Brigantium ( Bregenz ) via Cambodunum ( Kempten (Allgäu) ) with Augusta Vindelicorum ( Augsburg ). Around 500 AD, the Alemanni conquered the Roman Limes and have lived in the area ever since. In the 8th century, the area of ​​today's Lindenberg was in the hands of the noble family of the Udalrichinger von Bregenz and their heirs.

In the 9th century the area went to St. Gallen . The first written mention of Lindenberg can be found on a deed of ownership from the St. Gallen monastery . In the year 857 Patacho and Sigibert , two important nobles, donated goods in "Lintiberc" to the monastery of St. Gallen . Then the place passed to the Counts of Montfort , whose ancestral castle near Bregenz can still be seen today. Their governor was in Thalersdorf (Dallendorf) near Gestratz and the farmers had to bring their tithes there. In 1249 the church, goods and subjects came to the Mehrerau monastery , which was built in 1097. The Lindenberg parish was first mentioned in 1257 in the Liber decimationis of the Diocese of Constance .

In 1634, during the Thirty Years' War , Swedish troops broke into Western Allgäu; in the spring of 1634 large parts of Lindenberg were cremated. Lindenberg became more important when it received market rights in 1784. Up to three cattle markets were now allowed to be held each year.

Lindenberg belonged to Austria as part of the Bregenz-Hohenegg rule until the Napoleonic Wars . A French army entered the Allgäu in 1796 and advanced to Kempten . In the Treaty of Brno of December 10, 1805, the place came to the newly created Kingdom of Bavaria ; In the Peace of Pressburg , the Austrian Empire under Franz I agreed to some cessions at the end of 1805. With the municipal dictates of 1808 and 1818, today's municipality was created.

As early as 1656, Lindenberg straw hats were being sold in peddlers and at markets. In 1755 they began to organize the manufacture and sale of straw hats. Numerous small companies were created by 1914. The hat industry is economically insignificant today; the memory of them is kept alive with an annual "hat day" and a hat museum . In 1901 Lindenberg is connected to the Röthenbach – Scheidegg railway line . In 1908 the place was elevated to a city. The parish church was consecrated on May 14, 1914. Both world wars bring hat production to a standstill. Lindenberg is occupied by French troops on April 30, 1945. In 1955 the Bavarian District of Lindau returned to the Free State of Bavaria. 1993 the railway line is closed by Lindenberg. In 2014 the German Hat Museum opens in Lindenberg.

The population figures from 1840 onwards relate to today's municipality area (as of 1978).

In March 2014, Eric Ballerstedt was able to prevail against incumbent Johann Zeh in the second ballot. Zeh had held the office for 18 years.

The Lindenberg coat of arms shows a two-tower red church in silver on a green Dreiberg in front view with a wide porch and blue roofs, a green linden tree on each side.

City parish church of St. Peter and Paul
The foundation stone for this church, also known as the Westallgäu Cathedral , was laid on September 8, 1912, and the inauguration took place on August 1, 1914. The architect of the neo-baroque building was Franz Rank . The ceiling painting, created in 1961, is considered the most important work by the Goßholz painter Paul Keck (1904–1973).
Aurelius Church
The old Peter and Paul Church is named after him because of a relic of St. Aurelius, in order not to confuse it with the new parish church. It dates from the Middle Ages and was rebuilt in the 17th century after a fire; until 1914 it was the city parish church.
Hat museum
The previous Hat Museum Lindenberg, which showed hats, hat presses, blanks and many remarkable details on the subject of hats on over 300 m², closed its doors on October 27, 2013. As the German Hat Museum Lindenberg , it was reopened on December 13, 2014 in an expanded and modified form in the building of the former hat factory Ottmar Reich.

The Waldsee is one of the highest moor lakes in Germany at 765.4 meters and was created as a fish pond in the Middle Ages.

The “International Cheese and Gourmet Festival” takes place in Lindenberg, where cheese makers from the region, but also from France, Switzerland, Austria, Italy, Holland and Slovenia are represented.

The so-called "Huttag" takes place every year in April. For this purpose, the Lindenbergers choose their Lindenberg hat queen every two years . During the two-year term of office, she represents the hat town of Lindenberg and the Westallgäu at events, tourism and fashion fairs, in publications and hat fashion shows.

The socialist hat is a prize awarded annually in Lindenberg by the Lindau district association of the SPD Bavaria .

In addition to a traditional cheese factory, Lindenberg is home to suppliers to the aerospace and automotive industries as well as one of the largest European photo laboratories.

Typical architectural contrast in Lindenberg in the Allgäu

Significant companies and institutions are:

Lindenberg owns the Rotkreuzklinik Lindenberg, a hospital for basic and standard care. It was founded in 1963 and has 174 beds.

In Lindenberg lived and worked or also live and work:

Officially named parts of the municipality of Lindenberg im Allgäu

Municipalities in the district of Lindau