Traditional agriculture in Sudan with the digging stick

Use of technology in modern agriculture: combine harvesters harvesting wheat

On the basis of farm implements used has Eduard Hahn between grave floor construction, hoe and the plow construction distinguished. The fields of today's industrialized agriculture are descendants of the plow-worked fields. Through tillage and other agricultural measures (e.g. fertilization ), the cultivated plants should be provided with optimal growth conditions. a. the loosening of the crumb , the containment of the occurring weeds and the regulation of the water balance.

Agricultural production serves both direct consumption and storage . In addition to soil cultivation and fertilization, the work to be carried out in agriculture also includes maintenance measures such as plant protection or weed control and the desired harvest as well as the breeding of the plants to be grown.

Are grown as food serving plants such as the various cereal species, legumes and root crops such as sugar beet or potatoes .

In addition, a number of plants are grown that are not or only partially used as food for humans. These include tobacco plants like tobacco , fiber suppliers such as flax or cotton , oil seeds (eg. As rape ) and livestock feed , such as clover . 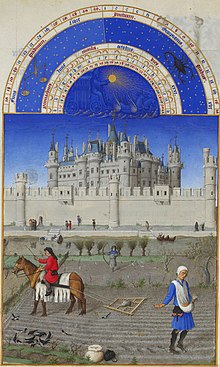 The beginning of the New Stone Age (Neolithic) is mostly equated with the beginning of agriculture. This was preceded by the Middle Stone Age (Mesolithic), which nevertheless cannot be described as the development period from hunter-gatherer to agriculture. Arable farming originated locally as digging stock in the Levant . Primitive devices such as furrow sticks and harvest knives were mainly used. With the spread of arable farming, the clearing of forest areas began. With the invention of the plow and the accompanying use of the yoke and ox , the plowing began , possibly initially as a Schwendbau .

The beginning of the Neolithic Age, like that of other epochs, can only be precisely dated regionally, as it represents a cultural development. In the Levant , according to the latest findings, the time when arable farming began was around 11,000 BC. And spread to 9000 BC. Throughout the Fertile Crescent . From there farmers brought from 7,000 BC Agriculture in southern Europe, inhabited by hunters and gatherers, and from there to the rest of Europe , until it finally reached 3000 BC. BC was also widespread in Northern Europe . The linear ceramic culture (between 5700 and 4100 BC) was particularly important for Central Europe . In Africa spread in the 3rd millennium BC Agriculture also south of the Sahara.

In Asia , agriculture reached in the 7th millennium BC. BC Pakistan and the north-west of India , from there it apparently only spread from the 4th millennium BC. Chr. Continues on the subcontinent . Independently of the Middle East, agriculture appears to have developed and expanded in East Asia . 7000 BC There was agriculture in northern and central China , 2000 years later in southern China and around 3500 BC. In Taiwan . Around 2000 BC He came to Vietnam , Thailand and Cambodia , as well as Borneo and Sumatra , 500 years later to other islands in Indonesia . Genetic research has shown that here, too, the new culture was spread by peasant migrations. In Japan agriculture only stopped around 300 BC. Entry when other cultures were already in the Copper , Bronze and Iron Ages . From a technological point of view, some Amazonas and areas of the Kalahari can still be classified as Neolithic.

The technical and social developments associated with the emergence of agriculture are also known as the Neolithic Revolution . The name was coined in 1936 by Vere Gordon Childe .

However, it is difficult to distinguish between modern (industrial) and traditional farming methods. Sometimes the limit is drawn when using motorized agricultural equipment. It is also disputed whether permanent farming should still be viewed as a traditional economic form.

Measures to increase the yield in permanent cultivation

One way to increase yields in Dauerfeldbau is, on the one hand, crop rotation systems to use meeting the nutrient content and soil fertility preserved and pests fight. There is also the possibility of fertilizing the cultivation area in order to achieve higher yields.

Permanent cultivation in the tropical rainforest

In the tropical rainforest , it is not advisable to do permanent cultivation. Even if you grow in favor of dreams, you can expect that the nutrients will gradually decrease and thus the yields will continue to decrease. There is sufficient rainfall, but due to the large pores of the soil it almost always flows immediately into the deeper soil layers. In addition, the soil hardly contains any mineral nutrients, so that the plants would not get enough minerals in permanent cultivation. With Terra Preta can also be in the tropical rainforest Dauerfeldbau operate.

The floor attachment is an applied in rainforests management system, especially the indigenous peoples is operated in South America, Africa and Asia. In addition to the wild trees, many different crops are grown without destroying the forest in its original state. European crops are not used, but rather native plants that have adapted to the climate and the forest and provide correspondingly high yields.

The field is used both horizontally and vertically in multi-storey building. So very tall trees, such as B. Brazil nut, which provide shade to all plants grown underneath and protect them from the intense sun of the tropics. In the middle layer, bananas , citrus fruits , mangoes and the like are grown. Vegetables can be grown in the shrub layer , and sweet potatoes and yams grow in the ground . The entire height of the forest is used, the ground is always covered, cannot dry out and is held in place by the rooting ; it is not washed away or washed out in heavy rainfall. Multi-storey cultivation can be harvested all year round.

Agricultural favor in the tropics

The basis for the fertility of the exceptional areas is the supply of nutrients or clay minerals with a high cation exchange capacity , so-called three-layer clay minerals .

Agricultural favored areas are located in places with a relatively moderate climate, e.g. B. in slightly higher places, since the temperatures there are not as high as at sea level. In addition, fertile soil, which has a high nutrient content and low pore volume, is important. This texture provides the plants with nutrients and prevents the water from seeping away too quickly. Sufficient rainfall is also required . However, this must not be too high, otherwise the plants will be "overwatered".

The Ecofarming is a cultivation method , with as little debt use the highest possible, which aims crop yield to achieve. This is z. B. achieved that a cultivation structure is used, which is similar to the floor structure of the tropical rainforest and thus deprives the soil as little nutrients as possible. Ecofarming involves terracing slopes and creating anti-erosion trenches. The terrace edges are planted with trees. Further trees and bushes are planted for the production of fruit, construction and firewood, fodder and mulch for building up humus. There is an intensive green manure. Livestock farming is being moved from pasture to stables. Permaculture follows a similar concept .

Compared to ecofarming, there is no soil protection with monoculture , so rain and sun hit the ground with full force. The soil is washed out by rain and dried out by the sun. The plants deprive it of all nutrients, so that after a few years the soil can no longer be used. With ecofarming, however, you use the advantages of the primary forest, which z. B. in the self-fertilization of the soil by diverse life forms in the soil as well as fallen leaves by trees and bushes. Furthermore, the rain is slowed down and no longer hits the ground with full force. This prevents the washing away, i.e. erosion of the thin nutrient-containing layer. The same applies to the sun, which is also kept from drying out the soil here.

Southern Europe is located in the region of the Mediterranean or winter rainy climate . That means: hot, dry summers and mild, humid winters with a lot of precipitation. In summer, the sea air from the west is shifted from the south to the north by the continental air. In winter the continental air from Africa becomes weaker and is shifted to the east by the sea air. So the further east you go, the greater the temperature fluctuations. From an economic point of view, it is not without problems for agriculture to do arable farming. Because in summer there is hardly any precipitation and it is too hot and dry. In winter, however, there is too much rainfall, which can then cause entire floods. So the seasons spring and autumn are more suitable.

Huertas are gardens / areas of irrigation field cultivation, as the Spaniards call it. They lie in the narrow coastal lowlands of the Mediterranean coast or in river valleys and other plains. Here high yields are achieved on small areas. The cultivation takes place with irrigation channels.

Nowadays, inexpensive drip irrigation is also used. Foil greenhouses are even more useful. You can harvest all year round, up to 3 times. Even in winter there are no heating costs.

However, none of this indicates that there is no vegetation , because the plants adapt. In the Mediterranean region it is called the hard-leaf vegetation, consisting of olive trees, grapevines, pines, cypresses, sweet chestnuts and, last but not least, the citrus, or citrus or tropical fruits. The leaves here are particularly leathery, small and hairy. Some also have a waxy coating, because all plants try to protect their water from evaporation as much as possible. The bark is also very thick, and the roots (e.g. of the olive tree) reach up to 6 m deep to reach the groundwater.

Some plants are particularly prickly like those of the maquis . This is a thorny, 2 m high undergrowth on mountain slopes. In spring they bloom in the most beautiful colors.

In areas where rain-fed agriculture is possible and practiced, the annual precipitation is greater than the evaporation , which enables plants to be grown without additional artificial irrigation . Rain agriculture can be found, for example, in the climatic zones of the dry savannah , the thorn bush savannah and the subtropics (e.g. in Portugal in the Alentejo ). This cultivation method was already practiced by the Romans and spread throughout the Mediterranean. Annual rainfall <400 mm is usually not enough for the cultivation of grain. For this reason, furrows are first drawn in the field in which the water collects. After the rain, the fields are plowed to reduce evaporation. Repeating the procedure several times can cause the soil to accumulate water for 2 years. In the third year, the grain is sown shortly before the rainy season. The soil now contains enough moisture for the grain to ripen. Because of the two-year fallow land , rain-fed agriculture is associated with a high level of land consumption , but does not require additional irrigation.