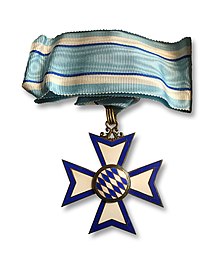 The Bavarian Order of Merit is the second highest order in the Free State of Bavaria after the Bavarian Maximilian Order for Science and Art .

The Bavarian Order of Merit was established by law on June 11, 1957 by the Bavarian Prime Minister Wilhelm Hoegner as a “symbol of honorable and grateful recognition for outstanding services to the Free State of Bavaria and the Bavarian people”.

Rights of the medal bearers

Medal holders and an accompanying person are allowed to use all objects of the Bavarian administration of the state palaces, gardens and lakes and the state museums, collections and special exhibitions free of charge, provided they are accessible to the public. It also includes free use of Bavarian shipping on the Ammersee , Königssee , Starnberger See and Tegernsee .

The Bavarian Order of Merit was designed by the former royal Bavarian purveyor to the court, the Hemmerle Brothers - who thus holds the rights to the design - and the Order of Merit is still produced in this company today - along with many other Bavarian orders and awards.

The medal has the shape of a Maltese cross , the arms of which are enamelled in white on the front and back and provided with a narrow blue enamel border . The center piece is a round, gold bordered medallion, which shows the diamond coat of arms on the front and the Bavarian lion in gold on a black enamel background on the back.

Bearer of the Bavarian Order of Merit

Bavarian Order of Merit in the women's version

According to the Bavarian State Chancellery, “since the 1970s, no justifications or laudations have been given at the award ceremony . This procedure was probably taken over from the time before ”. From this it follows that a concrete reason for a specific award does not have to be nameable. At the award ceremony on July 20, 2011, information about the dignitaries and their achievements was given for the first time. "We wanted to explain the background to the public," said a spokeswoman for the State Chancellery.