Order of Merit of the Bavarian Crown 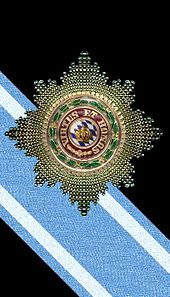 The Order of Merit of the Bavarian Crown , originally under the name Civil Merit Order of the Bavarian Crown on March 19, 1808 by King I. Maximilian Joseph donated was a high award of the Kingdom of Bavaria on the one hand civil servants of the state of all classes and also deserved to Bayern foreigners honor to be able to. It goes back to the Palatinate-Bavarian Order of the Palatinate Lion . Its military counterpart is the Military Max Joseph Order .

The medal of merit is the already existing civil merit medal, which was affiliated to the order with the foundation as a fourth class. On May 24, 1855, King Maximilian II introduced the Grand Commander as a further class of the order.

Signs of the order and way of wearing

The insignia is an eight-armed, sixteen-pointed, white enameled cross surrounded by an oak wreath with a medallion in the center. This shows the golden royal crown on white and blue wake , surrounded by a gold bordered red ring with the inscription VIRTUS • ET • HONOS (virtue and honor). In the reverse the bust of the founder Maximilian I. Joseph looking to the left with the inscription MAX.JOS.BOJOARIAE.REX.

The merit medal is a round medal made of gold or silver with a diameter of 35 mm. On the obverse it shows the left-facing portrait of King Max I Joseph, in antique clothing, with the inscription MAXIMILIAN IOSEPH KÖNIG VON BAYERN . In the reverse there is the five-line inscription DEM / MERDIENSTE / UM FÜRST / UND / VATERLAND , which is surrounded by a wreath made from laurel (right) and oak (left) branches.

The Order of Merit of the Bavarian Crown was one of the four royal Bavarian orders that were depicted in the state coat of arms.

For Bavarian subjects, the award of the Order of Merit was associated with elevation to the personal nobility . With the entry in the nobility register of the Kingdom of Bavaria, the bearers received the addition "Knight of" to their civil name. From 1812 to 1818, members of the order ennobled in this way were supposed to use the Bavarian transmission nobility.

Following the French model, an order member whose father and grandfather had also earned this distinction or were knights of the Military Max Joseph Order had the right to be conferred hereditary nobility. Such a case occurred for the first time in 1897 with the professor of civil law Ernst August von Seuffert (1829-1907). There was no ennoblement associated with the medal.

Since the Military Max Joseph Order was tied to military achievements (and thus to armed acts during a war) and since 1808 the conferment of hereditary nobility titles in Bavaria was increasingly tied to material conditions (a nobility acquirer had to be financially able to do so To lead a “befitting life”, which in the beginning meant primarily a correspondingly large property or property), the civil merit order developed into the main instrument for ennobling in the Kingdom of Bavaria in the course of the 19th century .

The following award numbers can be determined from the information in the court and state handbooks for the Kingdom of Bavaria. From 1910 onwards, awards to foreign recipients were no longer published. The actual number of awards is only slightly higher than the following.

The decoration of the honorary badge of the Bavarian Prime Minister for services in honorary office , which has been awarded since 1994, is based heavily on the Order of Merit of the Bavarian Crown.

see: Bearer of the Order of Merit of the Bavarian Crown

Commons : Order of Merit of the Bavarian Crown  - collection of images, videos and audio files