The oaks ( Quercus ) are a genus of plants in the beech family (Fagaceae).

A large oak tree in Alabama 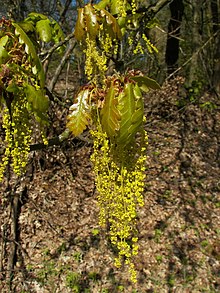 The alternate leaves arranged in a spiral on the branches are usually divided into a petiole and a leaf blade. The thin to leathery, simple leaf blades are lobed or unlobed. The leaf margins are smooth or serrated to spiky serrated. The inconspicuous, extrapetiolaren stipules falling early on (for Quercus sadleriana they are conspicuous).

Oak species are monoecious, mixed sexes ( monoecious ). The inflorescences , usually in groups of several at the base of young branches, are unisexual. The flowers are very simply built, as is often the case with wind-pollinated ( anemophilic ) taxa . The male flowers are grouped in hanging inflorescences (catkins). The bracts are fused. The male flowers usually contain six (two to twelve) stamens , there are sometimes reduced pistillodes (sterile pistils) in the form of tufts of hair. The female flowers usually contain three (to six) carpels and a pistil with several styles. Each cupula (fruit cup, cone) contains only one female flower.

Oaks are particularly recognizable by their fruit , the acorn, and can be distinguished in the individual species. The acorn is a nut fruit . They ripen in the first or second year after pollination. Each nut fruit is surrounded by a fruit cup.

The basic chromosome number is x = 12.

People have noticed from ancient times that oaks are home to an unusual variety of insects (up to 1000 species in a crown). The specialization of numerous insect species on Quercus species is considered a sign of the great developmental age ( coevolution ).

Oak species are feeding habitats for the caterpillars of many butterfly species . In Central Europe it is only surpassed by the Salweide . Both are home to over 100 species.

Locations of the oak species in Central Europe

In Germany , according to the Third National Forest Inventory (2012), oaks make up 11.6 percent of the forest area with an area of ​​1.1 million hectares. The oak area in German forests increased by 70,000 hectares between 2002 and 2012. The oaks are the second most common deciduous tree genus in Germany after the common beech . These are mainly the native oak species common oak and sessile oak . The red oak , imported from North America, occupies only 0.5 percent with an area of ​​55,000 hectares.

Oak species already appeared in the Tertiary . They are found in fossil form twelve million years ago, for example in sediments in the Lower Rhine Bay . The star hair , which is very common in the Oligocene / Eocene Baltic amber , is also attributed to oaks. Oak blossoms are also not uncommon in Baltic amber. Oaks are very well documented by fossil pollen (e.g. from the Miocene of Austria, Iceland, and the Eocene of Greenland and the United States), which can be assigned to certain sections or evolutionary lines due to their ornamentation. From the spread of fossil pollen and the molecular clocks based on it, it can be concluded that today's main lineages of the oaks emerged and diversified in the lower Eocene. In the Paleocene of Greenland and the Upper Cretaceous of the United States, a wide variety of pollen from both extinct and still living Fagaceae (beech family) could be detected, but oaks are missing. The assignment of some Cretaceous plant fossils to Quercus or Quercophyllum is, however, controversial. 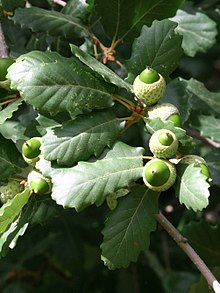 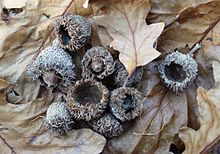 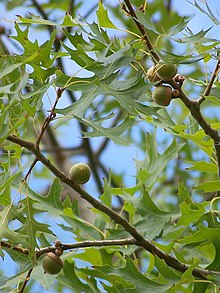 The Roman author Quintus Ennius (239–169 BC) has the earliest literary evidence for the Latin name of a Quercus species, 'quercus'.

Quercus species are found in North America , Mexico , the Caribbean Islands , Central America , in South America only in Colombia , in Eurasia and in North Africa . Quercus is the most important genus of deciduous trees in the northern hemisphere . One focus of biodiversity is North America.

The genus Quercus contains around 400 to 600 species (461, as of 2020), of which at least 280 are in the subgenus Quercus and at least 140 in the subgenus Cerris . The genus is divided into the (primarily) New World sub-genus Quercus (maximum diversity in North and Central America, ~ 30 species in Europe and Asia) with five sections, Quercus (white oak in the narrower sense) , Lobatae (red oak) , Ponticae, Protobalanus and Virentes ( Engl. Live oaks ), and the ancient genus Cerris with three sections, Cerris (Zerreich in the narrower sense), Cyclobalanopsis and Ilex , divided. The classic division into two sub-genera (or genera), going back to Andres Sandø Ørsted , Cyclobalanopsis (section Cyclobalanopsis ) and Quercus (all other oaks) found no equivalent in molecular-phylogenetic family trees.

A complete list of species with information on distribution can be found in R. Govaerts. Here is a selection of species:

Information on the species commonly found in Central Europe

The English oak and sessile oak , native to Central Europe, are typical species of white oak, although these two species occur together in large areas and tend to hybridize , and therefore often cannot be clearly differentiated. They are so-called light tree species, which means that they need more light as they grow than the European beech and form open, light crowns themselves. The use of forests for forest pasture ( Hutewald ) has therefore promoted the formation of oak forests, because the grazing animals have inhibited the offspring of the European beech, as it is less able to cope with browsing and has less ability to move. The core wood of the white oak is very durable and was used a lot in shipbuilding . The two species native to Central Europe provide a habitat for well over 500 insect species. For more information, see the main articles of these two types.

In the ancient religions , myths and legends , the oak was a sacred tree. She was often associated with lightning gods or god princes. 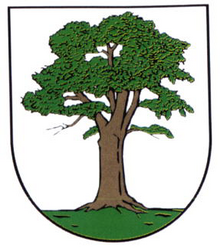 The oak tree can be found in the coat of arms of the city of Berga / Elster .

Oak branch - back of the last German penny pieces

Branch of an oak in cross section 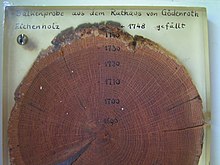 Beam sample from the town hall of Gödenroth (oak wood) 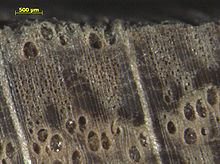 Wood of the grape oak

Oak trunks have the gray-brownish heartwood in their middle , which gets the typical sour-spicy oak smell from the stored tannic acid ; The sapwood is two to five centimeters light-colored, young wood that is still sap-infused towards the bark and sharply demarcated . The wood of the stem and has a bulk density at Traubeneiche Darrfeuchte (p0) 0.39 to 0.93 g / cm³, an average of 0.65 g / cm³, it is hard and easy to split.

The valuable hardwood from well-grown trunks is preferably processed into veneers. Heartwood is highly resistant to rotting and is rarely attacked by worms. Splint on the other hand very quickly. Oak is used for furniture, stairs, floors, exterior doors and windows, half-timbering and in hydraulic engineering. Of all types of oak, only about 180 are suitable for making wine barrels, see also barriques .

Oak is also considered to be good firewood with little flying sparks. However, its flame pattern is not as beautiful as with beech and birch wood or with fruit wood ; In addition, the calorific value is slightly lower than that of the European beech . 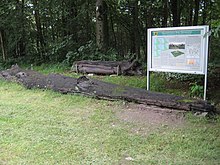 A special feature of the bog oak . These are not about a tree species, but about oak logs that had lain for centuries in bogs, swamps or river banks and were excavated. The tannic acid of the oak combines with the iron salts of the water, which makes the wood very hard and discolored. The discoloration can be very irregular and varies from light gray to dark yellow, dark brown, blue-gray to deep black. These subfossil oaks can be 600 to 8500 years old.

The fruits (acorns) are rich in carbohydrates and proteins and were used to fatten acorns . The pigs were driven to pasture in the woods, which were often operated as middle forest . Acorns were used by humans as food in prehistoric and early historical times as well as in times of need. Acorns were regularly used as a staple food by North American Indians (e.g. the Maidu ).

For use as food, the peeled and crushed acorns have to be gradually freed from the water-soluble tannins by bathing them several times in water , which can be easily recognized by the lack of discoloration of the water, with a higher temperature accelerating the process. They contain high amounts of tannins . Then they can be used, for example, as a flour substitute for porridge and cakes or as a coffee substitute " Muckefuck ", whereby with the latter use the tannic acid can optionally not or not completely be removed, for example for medical reasons. In Korea , the raw acorn paste is made into dotori-muk ( 도토리묵 ), an oak jelly , one form of which is dotori-muk muchim ( 도토리묵 무침 ), and oak noodles are also made; a Korean form is Dotori-guksu ( 도토리 국수 ), in Japan there are similar ones .

Tannins for tannery were obtained from the young, smooth bark (oak peeling forest).

The bark of the cork oak ( Quercus suber ) is used as a cork to make corks , cork floors and more.

In folk medicine, barkless oak bark was used to heal inflammation of the mucous membranes.

From the gall apples (knoppers), which are caused by the common oak gall wasp, document- proof iron gall ink was extracted or used for dyeing and tanning.

The fruit cups of some species (including Valons) were used for tanning in the past.

All parts of the oak are slightly poisonous because of the tannins they contain and can lead to gastrointestinal symptoms (gastrointestinal irritation, vomiting, diarrhea) (see the article: List of poisonous plants ). However , oak was and is valued as a medicinal plant . The oak mistletoe , which up until the Middle Ages was thought to be the fruit of oak, also found magical and therapeutic uses.

The tannins and aldehydes contained in oak wood can cause allergic reactions ( rhinitis , asthma ) when inhaled .

Oak as a natural monument - oak in the Kreuzwiese in Engelrod

Oak specimens, which are known due to their thickness, can be looked up in two lists:

In addition, other oaks are listed here.

The thickness of an oak is also often used to estimate the age of an oak. Another method is an estimate based on historical records. Since the oldest wood from the center of the trunk is missing, neither annual ring counting nor radiocarbon dating is possible.

The oldest oak in Germany is said to be the Femeiche in Raesfeld-Erle in the Borken district , whose age is estimated at 600 - 850 years due to its thickness. Three specimens are possible for the oldest oak in Europe, as the age estimates are very imprecise. The 1000-year-old oak in Bad Blumau ( Eastern Styria ) is estimated to be over 1200 years old, the English oak in Bulgaria in Granit, Stara Zagora district at 1640 years and the royal oak in Denmark in the Jægerspris Nordskov nature reserve on the Hornsherred peninsula between 1400 and 2000 years estimated.