The title of this article is ambiguous. For the place Speierling in Bohemia see Skviřín .

The Speierling ( Sorbus domestica ) - regional also eel, Sperber tree Sperbelbaum, Sporapfel, Spier apple, spreader hedgehog called - is a plant from the genus of flour berries ( Sorbus ) within the family of Rosaceae (Rosaceae). It is considered a wild fruit tree and, as a wild wood, is one of the rarest tree species in Germany; In 1993 the service tree was elected tree of the year here because of its declining population .

Bark of an elderly service tree

Illustration of a winter bud

The bark is rough. The service tree soon forms a cracked, relatively dark gray-brown bark with small scales on older trunks , which is similar to that of a pear tree . 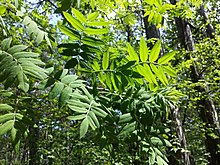 The leaves are unpinnate and have over a dozen pinnate leaves

The alternate and spirally arranged leaves on the branches are divided into a petiole and a leaf blade. The petiole is 3 to 5 inches long. The leaf blade, which is up to 25 centimeters long and about 10 centimeters wide, is unpinnate. On the leaf rhachis there are six to eight, rarely up to ten, oppositely arranged pairs, thus 13 to 17, rarely up to 21, leaflets ; this is the lowest number within the genus Sorbus (in Europe).

The leaflets are almost sessile except for the terminal leaflet, which is more or less petiolate. The leaflets, which are approximately equal in size, are 3 to 5 centimeters long and 1 to 1.5 centimeters wide and elongate with a pointed upper end. The edges of the leaflets are sharply serrated in the upper area and almost entire in the lower third. At the top they have teeth with an early sloping gland. The leaflet is initially downy, hairy and later balding. There is pinnate nerve, with 12 to 15 lateral nerves on each side of the main nerve. The base of the leaflets is evenly rounded. The stipules on the long shoot are obsolete.

The flowering time is at the end of full spring in May to June after the leaves have unfolded. 35 to 75, rarely up to 80 flowers are grouped together in terminal, umbrella-like inflorescences .

The hermaphroditic, pleasantly scented flowers are 16 to 18 millimeters in diameter and have radial symmetry and five-fold with a double flower envelope . The five green sepals are triangular and longer than wide. The five white or reddish petals are 6 to 7 millimeters long. The 20 stamens have yellow anthers. There are five free carpels . There are usually two ovules per carpel . There are usually five free pens available.

The service tree can be easily distinguished from the related rowanberry by its significantly larger apple fruits . The fruits ripen in September to October. The mostly 2 to 3, rarely 1.5 to 4 centimeters long and almost equally thick, pear- to apple-shaped, green-yellowish, olive-brown to reddish-yellow fruits when ripe can often turn reddish in the sun and become fully ripe chocolate-brown. They can vary considerably from specimen to specimen in terms of size, shape and color. The parchment-like core housing usually consists of five chambers. The fruits each contain one or usually two, egg-shaped and orange-brown, about 6-9 millimeters large seeds, sometimes five to six or a maximum of ten seeds.

The flowers can also be pollinated by insects ( entomophilia ), but the seeds are usually formed without pollination . The fruits are ingested by some birds and mammals and the seeds are then excreted, which allows digestive spread to take place. The service tree reproduces generatively in nature only in exceptional cases through seeds.

Of the pests , the scab represents the greatest danger for the service tree . The scab mainly affects the fruits , young plants and shoots. In addition, the crayfish attacks the service.

In Germany, the service is mainly found in the southwest, in the Rhine , Neckar and Nahe valleys , in the Taunus and in Lower Franconia . It occurs scattered in northern Baden-Württemberg ( Kraichgau , building land , Stromberg ), in the central Palatinate , along the Moselle , in the northern Eifel and in Main Franconia ; It is rare in northern Thuringia and western Saxony-Anhalt . 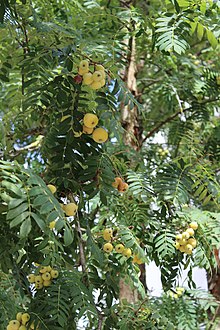 In the years from 2010 to 2013, the occurrence of ten rare native tree species in German forests was determined on behalf of the Federal Agency for Agriculture and Food (BLE) as part of the project recording and documenting genetic resources of rare tree species in Germany . 2,500 specimens of the service tree were recorded in naturally existing stocks (without planted "field service tree"). Half of all specimens of the service species found in Germany are found in Baden-Württemberg and Bavaria . In Hesse there are 400 to 500 specimens of the service that are 80 years or older. For example, there are 47 old service trees in Kronberg im Taunus and over 100 young ones. In the Wetterau district , 55 (as of 2014) natural monuments are identified with one or more spearlings.

In Austria there are about 500 adult Speier pieces, especially in Lower Austria , in Vienna and in Burgenland . Due to its rarity, it was voted tree of the year 2008 in Austria.

In terms of plant sociology, it belongs to the order Quercetalia pubescentis , but also occurs in the warm societies of the Carpinion association . In Germany, the service grows in the dry and warm oak-hornbeam and downy oak forests. 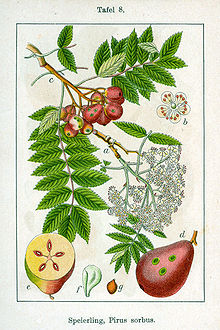 Illustration of the Speierling (from Jacob Sturm : Germany's flora in illustrations , 1796)

Because of the solid, heavy wood as well as its - quite tannic - edible fruits, the service tree was an important cultural wood in the Middle Ages. Only in a few regions is it still or again taken into cultivation, mainly for fruit production. The bark is rich in tannins and can be used as Gerberlohe be used.

The extremely tannin-rich juice of not yet fully ripe fruits is added in small quantities (1 to 3%) in some places during the production of cider . The clear, long-lasting and tart apple wine obtained in this way is also called " Speierling " for short and is a specialty in the Frankfurt area . This Speierling cider is not too common and its elaborately from the tree to be harvested ingredient sake usually somewhat more expensive than the standard.

The fruits are eaten raw or cooked. If you store the fruits in a cool place until they are overripe, they should also taste good raw. The fruits can also be used dried.

In folk medicine, the fruit played a role as an astringent home remedy for stomach and intestinal complaints such as diarrhea or dysentery because of their tannin content . Today they are processed into purees and jams or fermented and distilled . The fruit yield is not small: the largest existing service in Austria with a trunk diameter of one and a half meters carries around 500 kilograms annually. However, the small size of the fruits makes harvesting quite difficult.

The Speierling has a sand-colored to reddish - which the Elsbeere very similar - sapwood and often brownish A remote, hard and tough heartwood. With a dry weight of 0.88 g / cm³ ( kiln density ) it is the heaviest European hardwood. It is valued in tool making and for the construction of musical instruments (bagpipes), used for carving and turning , and traded as valuable furniture and veneer wood (under the name “Swiss pear tree”). It is used as a building material as well as roofing.

For more than 100 years there has been a sharp decline in the service in Europe . The service tree is individually or in small groups a type of tree from those deciduous forest communities that were managed in so-called medium - sized forests until a hundred years ago . With the forestry enforced high forest, the service tree was subject to competitive pressure from the larger, higher-growing neighboring trees.

Most of the specimens in the open countryside evolved from seeds. Seeds can be stored at minus 21 ° C for up to 15 years. The service tree is a frost and dark germ (at 0 to 4 ° C the germination time is 10 to 14 weeks). For artificial offspring, it has proven useful to wash the seeds out of the ripe fruits, then store them in peat for several months under wet and cold conditions and then transplant them.