The black poplar ( Populus nigra ), also Saar tree called, is a plant from the genus of poplar ( Populus ) in the family of the pasture plants (Salicaceae). It is widespread in Eurasia and North Africa. 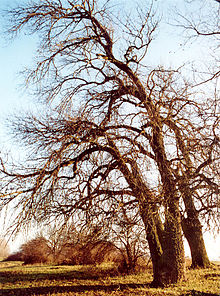 Old black poplars in the winter aspect of the Elbe

The silhouette looks much more irregular and gnarled than that of hybrids; it is sometimes more reminiscent of an oak than a hybrid poplar 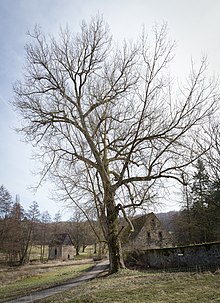 The black poplar grows as a deciduous tree that can reach heights of up to 30 meters under favorable site conditions. Older specimens of the black poplars are thick, gnarled. In Germany, specimens with trunk diameters of over 2 meters are known. The trunk has a gray-brown bark with a coarse, x-shaped structure, which is very peculiar due to the transverse cork beads. The formation of water veins and measles bulbs often leads to bizarre stem forms. The treetops are irregular and sweeping. Their fine veins are directed upwards and are reminiscent of travel brooms. Black poplars live to be 100 to 150 years old; in rare cases they can reach an age of 300 years. Young twigs have a round cross-section and no cork ribs (this differs from hybrid poplars; see below!).

A sweet smell emanates from the buds. It is a sticky resin ( cutin ) that bees collect to make propolis .

As with all poplars, the leaves of long and short shoots of a specimen differ considerably from one another. Leaves on short shoots have a rhombic shape , on long shoots a rhombic-egg-shaped shape. The first pair of secondary veins of the leaf veins branches off from the main vein directly at the transition between the petiole and leaf blade (Wolterson effect). Species determinations via leaf characteristics can only be carried out in tree nurseries on vegetative descendants of the old trees to be examined with so-called norm sheets.

The black poplar is dioecious separately sexed ( dioecious ); so there are male and female trees. Many flowers are grouped together in so-called catkins , which appear before the leaves appear. The male kittens are up to 12 centimeters long and droop limply. They have twelve to thirty stamens , the anthers of which are initially purple. The female kittens are stretched to maturity. Clearly visible is the ovary with two yellow scars .

Eight native night owls develop on the black poplar, including the poplar hawk . The trees are also frequently inhabited by gall-producing insects ; the spiral gall louse is the most common type of louse. Their infestation causes a spiral twist and thickening of the petiole.

The black poplar grows as a river companion in the temperate climatic areas of large parts of Europe with the exception of Scandinavia , Scotland , Ireland and Northern Russia . It is found in large stocks on the major European rivers Loire , Rhone , Po , Danube , Elbe , Rhine and Vistula . The species Populus nigra has become very rare. It is commonly confused with the hybrid Populus × canadensis (see below).

The black poplar places high demands on light and warmth . Their locations must also have a very good supply of nutrients and water . It prefers to colonize gravel and sand soils that are well ventilated. With appropriate conditions, increases of 1 meter per year are not uncommon. Brief periodic floods do not pose a problem for growth. They even favor their ability to compete with the tree species of the hardwood floodplains such as oak , elm or ash . With long-lasting floods, however, the black poplar is clearly disadvantaged in terms of its vigor compared to the willow species ( Salix spec.) Of the softwood floodplain . Areas with standing water are not populated. This is the typical habitat of the alder . Black poplars are insensitive to gravel and silting up because they can form new roots on the trunk into old age. Mechanical injuries caused by large debris or drift ice heal quickly. According to Oberdorfer , the black poplar occurs particularly in the transition area of ​​the plant communities from Salicetum albae to Querco-Ulmetum.

The first publication of Populus nigra was done by Carl von Linné .

The Populus nigra is placed in the Aigeiros section within the genus Populus . This classification is secured by morphological features such as by analyzes of DNA from the cell nuclei . In analyzes of the chloroplast - DNA the way, however, to the section Populus asked. A possible and probable explanation for this is that the black poplar was created by hybridization , with the mother species coming from the Populus section and the father species from the Aigeiros section . Since Aigeiros species occur only in North America, but the black poplar in Europe, the separation of the two continents in the Miocene is considered to be the latest point in time for the emergence .

Canadian black poplars ( Populus deltoides ) and, above all, bastard black poplars ( Populus × canadensis ), which are the result of crossings of the American with the native black poplar, have also been planted in Europe since the 17th century . The cultivation of these hybrids , of which around 14 different varieties (cv) are used, has been carried out for economic reasons until today. The mass output is considerably greater and the quality of the trunk wood is better than that of the autochthonous real black poplar due to the straight growth . Hybrid poplars usually have a more evenly grooved bark with no horizontal cork beads. In contrast to black poplars, their young shoots also have cork ribs. A differentiation according to the external appearance is sometimes difficult. Black poplars and their hybrids can be clearly identified using modern genetic methods. Bastard black poplars have replaced the autochthonous nominate form almost everywhere. 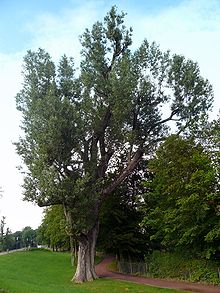 In Germany , the original wild form of the black poplar is classified nationwide as "endangered" in the Red Lists of fern and flowering plants . The two main causes are:

In Germany, the black poplar was voted tree of the year 2006. This is intended on the one hand to draw attention to the rarity of the genetically unadulterated specimens - only a few thousand such trees are suspected nationwide - and on the other hand to the threat to the biotopes in floodplains .

Around 500 individuals could be counted for 2006 in North Rhine-Westphalia. Of these, 103 were on the Lower Rhine in the Wesel district . The Lower Rhine is included in the original distribution area of ​​the black poplar. In Westphalia, the occurrence of the real black poplar can be found especially in the Hellweg area , there especially in the city of Dortmund , in the Unna district and in the Soest district .

Impressive examples can also be found at the Schkeuditzer Kreuz , west of the motorway near Leipzig . But here, too, there are only a few trees. Its leafy habit is more reminiscent of an oak than a poplar. A very old specimen is the Babisnau poplar near Babisnau , near Dresden. More impressive black poplars around 170 years old can be found in an avenue in Bliestorf, Schleswig-Holstein, south of Lübeck.

In 2016, a total of 180 black poplars were planted in the hardwood floodplain of the Garstadter Holz am Main nature reserve , after the type of the surrounding black poplars had previously been determined to be European using genetic tests.

There are also many medical accounts of the poplar. In the 2nd century , the Greek doctor Galen recommended an ointment from the early New High German still called alberbros buds of the black poplar against inflammation. The poplar ointment (Unguentum populi) was prepared from the resinous, sticky buds (especially the black poplar). Such ointments are still used today as a pain reliever balm.

Hildegard von Bingen (1098–1179) recommended wrapping babies with bruises in poplar leaves; In the case of gout, she said a warm bath with fresh poplar bark should help. Poplar-based medicines should be effective for sciatica and ear pain or urination.

The smooth wood of the black poplar is considered to be the most valuable of the domestic poplars and is very popular with sculpture carvers. Nevertheless, poplar wood is currently the cheapest wood on the market.