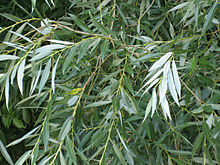 Male flower with two stamens and a bare bract

The white willow ( Salix alba ) is a plant in the genus of willow ( Salix ) from the family of the pasture plants (Salicaceae). The name refers to the silvery, narrow, lanceolate leaves . It is one of the few tree-shaped willows and was tree of the year 1999.

As a deciduous tree, the white willow can reach a height of up to 35 meters, it only grows as a shrub in exceptional cases. Willows that are around 200 years old have been found. Younger trees still have a pointed, conical crown ; on the other hand, the crown of older trees appears shapeless. The trunk can reach a diameter of up to 1 meter, which in older trees is characterized by a grayish, deeply furrowed bark. The bark is dark gray with thick, closely spaced ridges. The branches are acute-angled. Young twigs are yellow to (red) brown, short lying hairy and flexible. Older branches are bare. The summer leaves are 5 to 12 inches long. They are narrowly lanceolate with the greatest width in the middle and evenly narrowed on both sides. The leaf margins are finely serrated; the glands sit on the tips of the teeth. The hairiness of the leaves is thin and silky on the upper side, dense and longitudinally aligned on the underside. As a result, the leaves appear silvery shiny and have given rise to the German and botanical species name. The petiole reaches 5 millimeters in length.

The dioecious flowers appear after the leaves shoot from April to May. The male flowers are yellow, the female green and later woolly white. The kittens are up to 7 inches long and cylindrical. The stamens are densely hairy at the base. The ovaries are glabrous, sessile or with a short stalk. The bracts are solid yellow and elongated. The base and the edge are short-haired, bald in the front part. There is only one outer bud scale, one inner bud scale and one pseudo scale are missing (in contrast to Salix - rubens ). The seeds ripen between June and July and have long, white hair that serves as a flight aid.

The white willow is native to all of Europe with the exception of Scandinavia , North Africa and east to Central Asia. In Central Europe it occurs from the plain to middle mountain ranges (mostly up to 850 m). In the Allgäu Alps in Vorarlberg, it rises on a slope near Gatter near Riezlern up to 1150 meters above sea level.

As a kind of warmth-loving light wood, it grows in flooded areas in riverside bushes, in alluvial forests , on backwaters , on streams or lakes. It prefers periodically flooded, nutrient and base-rich, calcareous to moderately acidic, sandy-gravelly clay soils or pure silt soils ( raw soil ). It is a character species of the Salicetum albae from the association Salicion albae.

As a pioneer plant, it also colonizes secondary locations such as ditches, banks of residual water or former extraction points for sand, gravel, clay and loam. The silver willow can also be used as a dump greening, for the recultivation of cultivated areas (soil improvement) or as a windbreak.

Mighty white willow trees often grow in the floodplains of large rivers. The stocks depend on regular flooding and, together with other types of softwood floodplains, help to mitigate flood events and stabilize the banks. With its extensive root system, the willow can limit erosion . It is very vigorous and has intensive roots. In the youth stage, the growth of the annual shoots can be up to 2 meters. The branches take root very easily when they come into contact with the ground and establish a very strong vegetative reproductive capacity . The seeds germinate quickly.

The heartwood d. H. the inner, no longer water-conducting parts of the wooden body are not protected against rot by tannins and weather quickly. This is why old willow trees are often hollow inside. Such caves serve as shelter for animals or they fill with humus and thus become a flower pot for other plants. The beaver usually builds its residential castles near pastures and uses them as a source of food.

Due to the loss of its biotopes, the white willow has significantly decreased in its population. This fact was a reason to choose this willow as tree of the year 1999.

Pollard willows are created by regularly cutting the branches back almost to the trunk. The branches were used as wicker for weaving baskets and as wickerwork for the infill of half-timbered houses. Because cutting back the pollarded willows became too laborious or unprofitable in the course of modern agriculture, many polluted willows grew out of the way and collapsed. In the meantime, committed environmentalists have often taken over the pruning of the pollarded willows.

The tangled braids of the willow are up to 20 cm long, upset shoots in which the leaves are stunted to scales. They are caused by gall mites of the genera Eriophyes , Aceria and Vasates .

The silver willow was first published in 1753 by Carl von Linné in Species Plantarum .

Some subspecies or varieties of the white willow are known. The status of the various forms is understood differently:

The colorful willow is an ornamental wood that came from East Asia and was imported into Germany. It is characterized by the yolk-yellow to mennig-red color of the young twigs, which are particularly noticeable in winter. The shoot is red. The leaves are almost bare on the top and only slightly hairy on the underside.

The silver willow and the broken willow ( Salix fragilis ) form the pale willow or high willow ( Salix × rubens cabinet ). The hybrid has red-brown branches. The leaf blade is widest below the center. The bracts are long hairy on the edge and bearded at the tip. A rare hybrid with the almond willow ( Salix triandra ) is the wavy-leaved willow ( Salix × undulata Ehrh. ).

With pastures of various origins being planted everywhere nowadays, seedlings often have parents of different subspecies. This leads to a certain standardization of the appearing characteristics ( phenotype ), but does not mean genetic impoverishment .

There are numerous cultivated forms of the white willow that are used in gardening and landscaping: 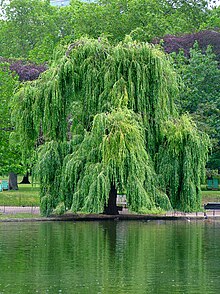 The white willow was often cut as pollard willow . The willow branches were previously used as wicker material. The white-gray wood with a brown core is used less often. It is soft, not very resilient, easy to split and pliable. Cricket bats , prostheses or wooden shoes are usually made from them. It is used more often as firewood or in the paper industry.

See also : Early history of salicylates in the history of acetylsalicylic acid

The bark of the willow contains the pain reliever and antipyretic salicin . In the 12th century Hildegard von Bingen recommended willow bark tea against fever , gout and joint rheumatism . In the 17th century, the bark was used to manufacture medicines against gout and rheumatism.

In hair care, silver willow is now used to avoid the yellow tinge of older gray, bleached or chlorinated hair.