In Germany, the common horse chestnut was voted tree of the year 2005. An important reason for this decision was the endangerment of the tree species by the horse chestnut leaf miner . By paying more attention to this problem, it is hoped that research will be faster for saving trees.

The common horse chestnut is a deciduous tree that can grow to heights of up to 30 m. It can reach an age of up to 300 years. The tree is fast-growing when young and forms a short, solid trunk with a round and broad crown. Old trees can reach trunk thicknesses of up to one meter. The trunk is always twisted to the right and made of yellowish-white, seedless wood. It can develop a wet core . Like all horse chestnuts, the common horse chestnut is a shallow root with extensive, strong roots. The shoots are thick and brownish-gray with a conspicuous five- to nine-lane leaf scar .

The bark of young trees is light brown to brown and smooth, later it sometimes becomes a little reddish, and older trees have a gray-brown, fielded bark, the cracked plates of which bend up and flake off in scales. The finger-shaped leaves are very large, lush green on top, glabrous, slightly shiny and light green on the underside with felt-like veins. The petiole is 10-18 cm long and runny. The individual leaflets , 5–7 in number, are narrowly obovate, 9 to 18 cm long and about 10 cm wide, finely pointed at the end, with a double-sawn leaf edge and narrowed in a wedge shape at the base. The buds are opposite, with a conspicuous large and thick terminal bud that is conical-pointed, multi-scaly, shiny and sticky. The buds appear in autumn.

The flowering period extends from April / May to June, depending on the weather. Many of the flowers sit together in upright thyrses , which are also popularly called "candles". The white, five-fold flowers have, as long as they are fertile, a yellow spot. Only in this phase is the sugar-rich (up to 70%) nectar produced. When the flowers have been pollinated, the stain turns red. This shows the pollinators that there is no more nectar and pollen to be found in the flowers with a red spot. There is one of the highest known numbers of pollen grains per stamen: 26,000. Per inflorescence there are up to 42 million.

The tree becomes manable at the age of 10-15 . Light green capsule fruits with a thick, leathery, prickly shell are formed, which ripen in September / October. The 5 to 6.5 centimeter large capsule fruits usually contain one, rarely up to three, 2 to 4 centimeter large, nut-brown and shiny, smooth seeds with a whitish umbilical spot (chalaza), the chestnuts , raw they are inedible for humans ( see : Horse chestnuts ). The horse chestnut is one of the plants that let their ripe fruits fall to the ground by means of gravity ( barochory ). When they hit the ground, the capsules usually burst and release their large seeds, which, depending on the location of the ground, roll a few meters further. This very rare form of dispersion of the diaspores is also known as gravity migration. The fruits germinate underground next spring.

The common horse chestnut is native to the Balkan Peninsula . Their area is very rugged and consists of individual occurrences in the low mountain ranges of Greece , Albania and North Macedonia . The largest stocks in Greece are in the districts of Phthiotis , Evrytania , Thessaly and Episus. In Albania, the natural occurrences are in the east of the country, in North Macedonia on the Black Drin and around Lake Ohrid , in the west of the country. In Bulgaria there is an occurrence along the Dervishka and Zourlyova rivers in the Preslav Mountains, but it is believed to be centuries-old artificial greenery. On the other hand, an occurrence in eastern Bulgaria is considered a natural occurrence. In the rest of Europe, the horse chestnut was introduced from Constantinople (Istanbul) from 1576.

In terms of its location requirements, the common horse chestnut resembles the hornbeam ( Carpinus betulus ). In the natural area it grows at altitudes between 900 and 1300 m, especially in shady and partially shaded, fresh to moist locations. It is a mesophytic species that needs light, so it also thrives in sunny locations. Regarding geology and soil, it is indifferent, but occurs predominantly on deep, fresh, alkaline and nitrogen-rich soils with a neutral to alkaline pH value .

The following diseases and pathogens are important in the common horse chestnut:

The horse chestnut leaf miner ( Cameraria ohridella ), which was observed in Europe for the first time in 1984 and has spread at around 100 km per year since it first appeared in Austria in 1989, has gained significant importance in recent years . Due to the infestation of the leaves, they fall off as early as August, which means that the trees are considerably weakened if the infestation is severe. In the case of heavily infested chestnuts, you can see a new shoot and a renewed flowering in August / September. Since the horse chestnut is not native to Central Europe either, the horse chestnut and leaf miner are a classic study case of invasion biology as neobiota .

Among the abiotic factors, the effect of the winter de-icing salt is of particular importance for the common horse chestnut , which leads to leaf margin necrosis and premature leaf fall in the next vegetation period.

The common horse chestnut is widely used, but it is not an economically important tree species.

Use without immediate economic exploitation 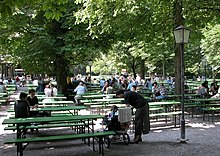 The flowers produce abundant nectar and pollen and are therefore a good foraging plant for bees . The seeds are also used for winter feeding for red deer , roe deer and other hoofed game species.

Children make chestnuts from the seeds .

In Great Britain and Ireland, children tie chestnuts on threads for the game Conkers ("chestnuts"): one child lets his chestnut hang by the thread, while a second child hurls his chestnut on the hanging chestnut. If one of the chestnuts breaks on impact, the child with the undamaged chestnut wins a point. Conkers World Championships have been held annually since 1965.

Wood of the horse chestnut

The wood is used for veneering in furniture production, for carving and as packaging material.

The saponins for the manufacture of cosmetics, paints and foams are extracted from the seeds , the starch is fermented into alcohol and lactic acid , the oils are processed into soap powder .

During the two world wars, the British government had chestnuts collected in order to obtain acetone for the manufacture of the explosive cordite .

Basic materials for the pharmaceutical industry are obtained from seeds, bark, leaves and flowers. The extractable active ingredient mixture aescin has a vascular strengthening, anticoagulant and anti-inflammatory effect. The preparations made from it are used, for example, against gastric and duodenal ulcers (duodenal ulcer), uterine bleeding, varicose veins and hemorrhoids .

A decoction of the seeds can be used as a rinse, foot bath, or poultice for swollen legs or arms. This should also be helpful with couperose and mild hemorrhoidal inflammation.

The fruits of the common horse chestnut are said to strengthen blood vessels , especially veins , and are said to be used against thrombosis , phlebitis (inflammation of the veins), varicose veins and hemorrhoids. Horse chestnut extract can also be used externally for these ailments and for ulcus cruris (ulcer formation on the legs).

The species is very diverse, numerous varieties and forms are distinguished:

Varieties with a special habit are:

When it comes to flower color, a distinction is made between shapes:

For the leaf shape there is the var. Laciniata Ler. with narrower pinnate leaves and deep, irregularly serrated leaf margin.

When it comes to leaf color, there are varieties

The form praecox is characterized by a shoot that begins two weeks earlier.

The German name horse chestnut refers to the sweet chestnut- like seeds that were brought to Central Europe by the Ottomans as horse feed and as a remedy for horse coughs. This was used to distinguish these inedible seeds from the edible chestnuts that have been known for a long time. 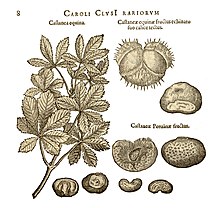 Imported to Vienna in the 16th century

The horse chestnut does not seem to have been known to the ancient authors, although the species grows in the mountains of Greece. It came to Central Europe with the Ottomans , who used it as horse fodder. The first report comes from the imperial envoy Busbecq from Constantinople in 1557. Ungnad brought the plant to Vienna in 1576, where it was planted by Carolus Clusius . By shipping the seeds, Clusius spread the seeds across Europe.

The horse chestnut quickly became a fashion tree, initially in princely parks and avenues. From the 18th century it was widely planted as an avenue tree. In the 19th century, it was very often planted in the newly emerging public gardens in Germany. So it became a "character tree of urban green spaces". It is not unlikely that all of the cultivated trees of the common horse chestnut planted in Europe stem from the seeds brought to Vienna in 1576.