The Lake Ohrid ([ ɔxridzeː ] Macedonian Охридско Езеро Ohridsko Ezero , Albanian  Liqeni i Ohrit , rarely Liqeni i Pogradecit ) is the second largest lake of the Balkan peninsula and one of the oldest in the world . The greater part of it belongs to North Macedonia , whose largest body of water it is, and to a lesser extent to Albania . The water level is 695  m above sea level. A. Lake Ohrid has a maximum depth of 288 meters. Its area is given in North Macedonia as 349 square kilometers, while official Albanian sources speak of 362.6 square kilometers and other figures such as 358 square kilometers can be found in the literature. The larger part belongs to North Macedonia, the smaller part to the Republic of Albania, although the figures are also different. On the North Macedonian bank, Ohrid and Struga are the most important cities, on the Albanian it is Pogradec . In total, more than 200,000 people live around the lake. 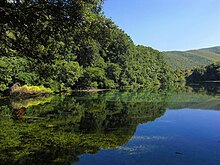 Source at the Sveti Naum monastery

Lake Ohrid, whose catchment area is 1,414 square kilometers, has no significant inflow. It is fed by numerous spring streams. The main source is at the Sveti Naum Monastery . This is where water emerges that flows underground from Lake Prespa, 200 m higher and southeast of Lake Ohrid . However, it is not certain whether this connection still exists or when and how long it existed. It is possible that this connection is of a temporary nature and is opened and separated by geological processes in the karst rock between the two lakes. On the Albanian side there is an important spring in the park of Drillon near the town of Tushemisht . Another, underground spring near Tushemisht is used for the water supply of Pogradec.

The lake near Struga is drained by the river Schwarzer Drin towards the Adriatic Sea . The outflow is regulated by a needle weir .

Lake Ohrid is one of the oldest lakes in the world. Its age is estimated at 2 to 5 million years, the occurrence of endemic species (see below) suggests an emergence in the Pliocene , i.e. more than 2.6 million years ago. The lake was created by a rift valley . The tectonic activities that still occur today probably also result in the existence of a subaquatic mountain about 100 meters high .

The existing uninterrupted sediments in the lake make it possible to research the paleoclimatological conditions. Currently, u. a. Researcher of the reconstruction of the late Quaternary climate and environmental history of the lake.

Fish in the spring pond by Sveti Naum 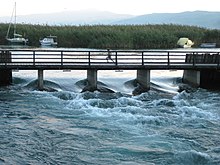 Outflow of the Black Drin near Struga

As Europe's most famous long-term lake, Lake Ohrid is remarkable for its fauna. Many of the typical fish species found in other European waters are missing, e. B. all real perch , grayling , char and coregon , the pike and the three-spined stickleback .

On the other hand, some fish species endemic to the Balkans occur here , e.g. B. the barbelgründling ( Aulopyge huegelii ) and other carp fish species from the genera Pachychilon and Phoxinellus . The endemic Ohrid trout ( Salmo letnica ; maz. Ohridska pastrmka , Alb. Koran ) is economically important . It is threatened because of overfishing , but is also bred on fish farms. Salmo ohridanus (alb. Belushka , maz. Belvica ), Salmo balcanicus , Salmo lumi and Salmo aphelios are also endangered or already extinct .

There are also various representatives of the gastropods that spread in the Paratethys during the Mesozoic . In addition to fishing, tourism is an important source of income for the communities around the lake.

View from Galičica to the southern lake basin

To the southeast of the lake lies the Galičica National Park , which includes the entire Galičica Mountains and extends to Lake Prespa. Together with the old town of Ohrid, this section of the bank and the Macedonian part of the lake have been UNESCO World Heritage Sites since 1979 ; In 2019 the Albanian part was also included in the World Heritage, which is now called Natural and Cultural Heritage of the Ohrid Region .

There are vineyards and chestnut plantations on the slopes of the Jablanica Mountains to the northwest . The horse chestnut leaf miner ( Cameraria ohridella ) was first observed here in Europe.

Ancient peoples and tribes such as the Illyrians , the Macedonians and the Greeks settled around the lake and founded the cities of Lychnidos (now Ohrid ), Enhallon (perhaps today's Struga ) and Damastion . There was a silver mine in the Illyrian city of Damastion, the location of which is not known but has been passed down through silver coins minted there. The cities benefited from raw materials such as gold and silver in the area. The settlement area on Lake Ohrid was controversial and the scene of repeated conflicts. The Macedonians were able to bring the region under their rule under Philip II (359–336 BC).

In ancient times, the Roman road Via Egnatia , which connected the eastern Adriatic coast with Thessaloniki and Constantinople , also passed Lake Ohrid . At the turn of the first millennium, Ohrid was the capital of the Bulgarian Empire for a short time .

On September 5, 2009, an excursion ship sank in Lake Ohrid with Bulgarian tourists on board around 250 m from the shore in Ohrid, killing 15 people. There were significantly more people on board the ship, built in Germany in 1924, than permitted. The Bulgarian Metropolitan Nikolaj saw misfortune as a divine punishment. The local police stated a few months later that the ship had loaded too many passengers and that there were almost no lifebuoys on board, which explains the many dead.

In the summer of 2014, a regular boat connection for tourists between Ohrid and Pogradec was established for the first time.