The Illyrians or Illyrians were a group of tribes that lived in ancient times on the western and northwestern Balkan Peninsula and in southeastern Italy , i.e. on the Adriatic coast and in the associated hinterland. The settlement area of ​​the Illyrians in the Balkans is called Illyria in ancient Greek and Roman historiography . The Illyrian language , largely unknown due to the lack of written certificates, belongs to the Indo-European language family .

Even in antiquity, the name Illyrians ( ancient Greek Ἰλλύριοι Illýrioi , Latin Illyrii and Illyri ) was used inconsistently, and the number of tribes that ancient geographers and historians counted among them grew as the Greeks explored the Adriatic Sea. 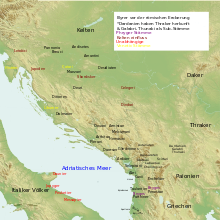 The Illyrians appear for the first time at Hekataios of Miletus (5th century BC), who (in the surviving fragments) includes the Japygians , Taulantians , Chelidonians , Sesarethers and Abrers among them. His further knowledge of these tribes is not recorded. Herodotus names in his histories (I 96) the people of the Ἰλλυριῶν Ἐνετοί (Illyriōn Enetoí) as neighbors of the Triballer , Dardaner and Macedonians . This localization makes an equation with the northern Italian Venetians less credible and has led to the assumption that Herodotus Ἰλλυριῶν Ἐνετοί are only a tribe of the Macedonians.

The Periplus of the Pseudo-Skylax (4th century BC) has closer knowledge of the Illyrians and divides them into tribes on the coast and those in the hinterland. Among the former, the author counts the Buliner , Hyller , Hierastammer , Nestäer , fashion , enchele , Taulantians, Oriker and Amantier to the latter, the autariatae , Atiutaner and dassaretae (or Dexarer called). The fact that the Japygians are missing from this list can be explained by their expulsion by the Liburnians .

The definition of the Illyrians as a people on the Adriatic coast in the Balkans, whose neighbors were the Liburnians in the north and the Chaonians in the south , was valid in the Greek cultural area until the time of the conquest by the Romans, and even the historical work of Skymnos (2nd century BC) . Chr.) Keep it that way.

This sharpness was blurred in Roman times. With the conquest of the Balkan Peninsula and the establishment of the province of Illyricum , the indiscriminate use of the name Illyrer accelerated . The Roman historian Florus already counts the Liburnians among the Illyrians (I 21), Eustathios and Appian (Illyr. 8) the Histrians and Strabo in addition to these the tribes of the Breuni and Genauni in the Alps (VII 314).

To counteract this generalization, Pomponius Mela (II 56) and Pliny the Elder (in his naturalis historia III 144) recommend that only the Illyrii proprie dicti ("Illyrians in the narrower sense") be designated as Illyians . They referred to the Illyrian tribes of the central Italian Adriatic coast. In the reports of authors from the imperial period , the Illyrians are mostly located between the Danube and the Sava in the north and Epirus (southern Albania ) in the south, from the Adriatic to the hinterland they are considered neighbors of the Thracians .

In the first half of the 20th century, the theory of panillyrism was developed specifically in the historical linguistics and prehistory research of the German-speaking area . Based on the finding that many toponyms could not be assigned to the Celtic , Latin or later language classes, an Illyrian settlement area was postulated that once comprised not only the Balkans but also large parts of Central Europe . Although this theory was already rejected as untenable in the academic world in the middle of the 20th century, it remained powerful in local history literature in the period that followed.

Traces of Greek colonization: Drachma from Apollonia in southern Illyria

Depending on the landscape, animal husbandry or agriculture formed the economic basis of the Iron Age inhabitants of Illyria. At the turn of the 2nd to the 1st millennium BC The pastoral cultures still dominated . Little changed in the mountainous regions of the Western Balkans, while agriculture prevailed in the plains. The Iron Age Illyrian society was divided into clan and family associations. Grave finds show considerable social differences.

Since the 6th century BC The Greeks established colonies in the Illyrian settlement area (including Epidamnos , Apollonia and Lissos ). Due to the not always peaceful contact with the Greek Poleis , the Illyrians took over Greek cultural elements. Greek luxury goods became prestige goods of the Illyrian elites. Numerous Greek imports were found in the large and richly furnished clan burial mounds in the valley of the Mat (northern Albania) and on Lake Ohrid .

The increased Greek influences are particularly evident in the emergence and expansion of the fortified hilltop settlements into central urban locations (such as Nikaia , Byllis and Berat ), which was associated with significant changes in the economy and social structure. Urban handicrafts and trade gained importance and the Illyrians now also operated seafaring on the coasts of the Adriatic ( trade and piracy ). On the basis of the cities arose since the 5th century BC. Smaller principalities . There were also mostly short-lived empires.

On the southern edge of the northern Albanian city ​​of Shkodra , the Illyrians founded in the 4th century BC. The town of Scodra is located on the hill today taken by Rozafa Castle . During Roman times it extended to the plain at the foot of the hill.

For the 4th century BC There are more and more written reports from Greek historians about the Illyrians. The kingdom of Macedonia was often involved in wars with the Illyrians and the Molossians in Epirus at that time . The Macedonian King Perdiccas III. fell in 359 BC In the fight against the Illyrians under their king Bardylis .

His successor, King Philip II (359 to 336 BC) was able to decisively defeat the Illyrians. However, they were not incorporated into the empire of Alexander the Great (336 to 323 BC), and in the 3rd century several Illyrian kings (such as Glaukias , Agron and Queen Teuta ) established significant regional rulers.

The Illyrians were also notorious as pirates at the time. Therefore in the year 230 BC they assumed Some Greek colonies in the Adriatic coastal area and on the offshore Dalmatian islands protected Rome. In the subsequent First Illyrian War from 229 to 228 BC The Romans built a bridgehead on the Dalmatian coast. In the Second Illyrian War (219 BC) the region came largely under Roman rule. The last Illyrian king Genthios , who resided in Scodra (northern Albania), was ruled by the Romans in 168 BC. Defeated and taken captive to Rome. The Illyrian territories were divided into satellite states dependent on the Romans .

During the 1st century BC The Illyrian area was finally incorporated into the empire as the province of Illyricum . Following the failed " Pannonian uprising " shortly after the Christian era began an intensive Romanization of the cities into Illyria. With the reaching of the Danube border under Augustus , Illyria was divided into the two provinces of Illyricum superius and Illyricum inferius , which were later renamed Dalmatia and Pannonia . The troops of the late Roman Empire in this region consisted largely of Romanized Illyrians. Several Roman emperors came from Illyria, for example Claudius Gothicus , Aurelian , Probus , Diocletian and Constantine . After the Slavs conquered the Balkans , the Romanized Illyrian pre-population was largely absorbed into the southern Slavs over the course of a few centuries or was displaced into remote mountain regions. 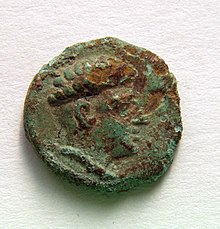 Many sources report of campaigns by Illyrian kings as well as alliances and treaties. Coins were minted by Illyrian tribes, cities and rulers. One can conclude from this that there were some forms of political organization in Illyria in pre-Roman times. From the early 3rd century BC BC the kings Monunios , Mytilos , Ballaios and Genthios minted coins. The latter is known to have regularly levied taxes on his subjects. However, nothing is known about their religious activities, nothing about jurisprudence , nor about an attempt to derive their position of power through a mythical genealogy , as was the case with the neighboring Molossians and Macedonians . The only exception was the royal family at the Encheläern that their descent from Cadmus and Harmonia claimed. The lack of permanent dynasty formation is also clearer . The supreme command of Illyrian armies changes several times between leaders from different tribes. The Pleuratos family was most successful among the Ardieans , which developed from the 4th century BC. With gaps over Agron and Teuta up to Genthios and his conquest by Rome can be proven.

However, the Illyrian kingdom did not last long. As of 232 BC When the Epirotic royal family was overthrown and the southern Illyrians regained their independence, they did not set up monarchies, but rather arbitrarily ruled Koina (singular Koinon ). As organs of südillyrischen Koina appear public meetings and decisions, Prytanes , strategists and demiurge . Federal states , as was the case in neighboring Epirus, did not exist.

As is known from a poem by Skymnos , one can basically distinguish between three types of political organization: 1.  Some tribes were under the rule of foreign kingdoms (such as Epirus or Macedonia). 2.  Other tribes were organized as monarchs, the king ruled over the tribal area. 3.  Still other tribes had no head, there was a kind of " anarchy ".

Remains of the theater in ancient Byllis (southern Albania)

The urbanization of Illyria began in the late 5th century BC. With the city complexes of Amantia , Klos and Kalivo located on the Butrintsee and took in the 4th century BC. BC with Byllis, Lissos, Albanopolis (near Kruja ) and Shkodra a strong upswing. Politically, they enjoyed self-government , but did not form independent city-states with their own foreign policy . In the administration of the cities, all writing was done in Greek .