The title of this article is ambiguous. Further meanings are listed under Harmonia (disambiguation) . 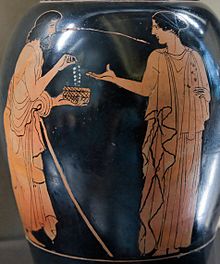 Harmonia ( ancient Greek Ἁρμονία Harmonía ) is the goddess of harmony in Greek mythology . The Concordia corresponds to it in Roman mythology .

She is the daughter of Ares and Aphrodite . She became the wife of Kadmos and mother of Polydoros , Ino , Autonoë , Semele , Illyrios and Agaue .

When she was married at the castle in Thebes , all the gods were present and gave her gifts. Kadmos von Thebes gave her an elaborate collar made by Hephaestus . This was the fatal jewelry, which later Polynices the Eriphyle was so that they her husband Amphiaraos bewöge to participate in the war against Thebes.

After Eriphyle's death, the collar came to her son Alkmaion's wife Arsinoë , then to Phegeus and Kallirrhoe and brought discord and murder everywhere until it was finally laid down by Alkmaion's sons as a consecration gift in the temple of Apollo at Delphi after the sons of Phegeus were murdered . Here, too, it brought bad luck. The wife of Ariston, a general of the Oitaians , was loved by the tyrant Phayllos and won over by this collar, which Phayllos stole, whereupon her son became mad and burned her along with her treasures.

After the Theban triumph of Dionysus over Pentheus , the victorious god ordered Harmonia and Kadmos to turn into snakes and live in distant lands. From there they should invade Greece with a barbaric horde. So they left Thebes and went to the Illyrian people of the Encheleans , who had received an oracle , according to which they would only win if these two were their commanders-in-chief. In fact, they lead the Encheleans to victory and become rulers of Illyria . Kadmos and Harmonia had another son there, Illyrios . In the end, they were transferred to Elysion by Zeus . After Apollonios of Rhodes, however, they died in Illyria and were buried there. It was also said that in the end they turned from snakes into stones.

According to a tradition handed down by Diodorus from Samothrace , Harmonia was the daughter of Elektra and Zeus . Accordingly, Kadmos came to Samothrace in search of the stolen sister Europe , received the consecration of Samothrace and married Harmonia there. The wedding is also celebrated in Samothrace and not in Thebes. Or Kadmos steals the Harmonia, which is why the Samothracian festival custom moves to “look for the missing Harmonia”. According to Stephanos of Byzantium , Harmonia is said to have come to Samothrace from Arcadia with her brother Dardanos and his son Idaios . According to Euhemeros , Harmonia is said to have been the flute player of a Phoenician king and Kadmos a cook of the same king with whom she went away.