This article deals with the Greek or Boeotian hero Kadmos. For more meanings, see Kadmos (disambiguation) . 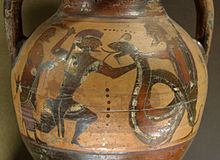 Kadmos ( Greek  Κάδμος , Latin Cadmus ) is in Greek mythology the son of the Phoenician king Agenor of Tire (according to other sources from Sidon ) and Telephassa . Kadmos was king of Thebes .

Agenor was heartbroken over the loss of his daughter Europa , whom Zeus had stolen and brought to Crete . So he called his sons Kadmos, Phoinix and Kilix ( Euripides in Die Phoinissen and Pausanias also mention Thassos as their son ) to go in search of the kidnapped daughter and not return without her. Telephassa went with her sons.

In Greece , those sent landed on the island of Kalliste , later Thera (from ancient Greek Θήϱα, which means ' hunt ' or 'booty'), donated sanctuaries for Poseidon and Athena and taught the inhabitants to write. In this context, Kadmos is credited with bringing the Phoenician alphabet to Greece. Then the Phoenicians continued their journey, except for a part of the retinue under the leadership of Membliaros, who stayed on Calliste and is said to have founded a Phoenician colony and the later Thera there.

They then came to Thasos and founded the city of the same name there. Her next stop was Thrace , where Telephassa died. Since the search had so far been unsuccessful, Phoenix and Kilix returned to Phenicia; But Kadmos set off for Phocis to consult the oracle of Delphi . According to Strabo , he landed on Euboea on the way there ; the historian reports that Arabs who accompanied Kadmos stayed there. The oracle told Kadmos to stop the search and instead look for a cow with a white drawing. When he has found her, he should follow her and found a town where the animal settles down exhausted. 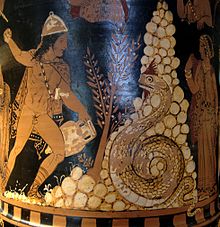 Kadmos fights the dragon.
Detail from a red-figure painting on a python- painted calyx crater (around 350 BC), found in Campania (Louvre, Paris)

Soon after Kadmos had left the oracle's cave, he discovered the described cow among the cattle of a phoker named Pelagon, who left it to him. Kadmos followed the animal for a long distance until it finally settled in the grass. Now he sent his companions to a nearby spring to fetch water, because he wanted to sacrifice the cow to Athena in thanks. The forest in which the spring was, however, was inhabited by a dragon , which is said to have descended from Ares . He killed the men sent out. But Kadmos could kill the monster in a bloody fight with his sword or - according to another variant of the legend - with a rock. Then Athena appeared and ordered him to plant half of the dragon's teeth - the other half she later gave to Aietes - in the ground. Kadmos did so, and armed men grew out of the strange seed, who immediately fought each other until only five of them were alive. They finally made peace with one another. Their names were Echion , Udaios, Chthonios, Hyperenor and Peloros. With these “seeds” , Kadmos built a city on the site, as Apollo had ordered through his oracle, and gave it the name Kadmeia . Only later did it receive the name Thebes.

Because of the killing of the dragon, Kadmos was ordered to serve Ares for eight years. Only then did he receive the throne of Thebes from Athena, and Zeus gave him Harmonia , the daughter of Aphrodite and Ares, as his wife. All the Olympian gods attended the wedding ceremony and the muses sang. Kadmos gave his wife the famous veil and necklace that he had received from Hephaestus or from Europe. They had four daughters, Autonoë , Ino , Semele and Agaue , and a son, Polydorus .

While still alive, Kadmos handed over the government to his grandson Pentheus , son of Agaue and Echion. Then he and Harmonia left Thebes and led the army of the Encheleans against the Illyrians in battle, since the Encheleans had received an oracle, according to which they would only win if these two were their commanders in chief. Kadmos and Harmonia had another son, Illyrios . In the end, they turned into snakes and were transferred to Elysion by Zeus .