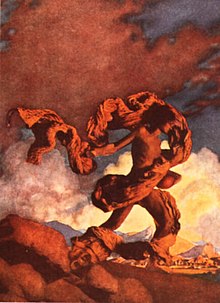 Recessed or Spartoi ( ancient Greek Σπαρτοί , seeded ' ) are of Cadmus resulting from sown in furrows dragon teeth ancestors of the Thebans .

Near the place where Kadmos was to found Thebes, there was a spring sacred to Ares , which was guarded by a dragon (or a snake). When the companions of Kadmos came to the spring to fetch water, they were killed by the dragon, and Kadmos, who came across the dragon in search of his companions, only managed to kill him with difficulty. Athena now advised Kadmos to strew the dragon's teeth in freshly drawn furrows. When he had done so, a large band of armed men grew out of the furrows, and after Kadmos threw a stone under them, they began to fight each other until only five survived. Kadmos and these five branches became the ancestors of the Thebans.

The best known of the divisions is Echion , who married Agaue , the daughter of Kadmos, and whose son Pentheus became king of Thebes after Kadmos. The names of the other divisions are Pelor , Chthonios , Hyperenor and Udaios.

In the Argonauts legend after Apollonios of Rhodes , Athena gave half of the dragon's teeth to Aietes , king of Colchis . This forced Jason to win the Golden Fleece , like Kadmos, to sow his teeth in furrows. Here, too, armed men jumped out of the ruts, but Jason threw a stone between them on Medea's advice , whereupon they began to kill each other until there was no one left.