Original of the so-called "Musesarcophagus" (2nd century AD), found on Via Ostense, today in the Louvre , Paris

The Muses ( Greek Μοῦσαι Mousai , singular Μοῦσα Mousa ) are in Greek mythology, the goddesses arts . The tradition of the nine muses known to us today comes from Hesiod .

Even in the Homeric Odyssey , the muse is invoked in the beginning chant, the Proömium , as nameless in the singular: "Call me, Muse ..."

Fresco Parnassus (around 1510) from the rooms of Raphael , Apostolic Palace , Rome: The nine classical muses are depicted on both sides of Apollo, presided over by Calliope (left) and Erato (right). The outer circle of those portrayed are poets , epic poets and prose writers .

Hesiod (sixth century BC) fixed the number of Muses in his theogony at nine: after him they are the daughters of Mnemosyne , the goddess of memory, and Zeus , and the names he mentions are canonical . They are called mnemonids or Olympic muses . However, Hesiod did not yet assign them specific areas of responsibility and attributes. These will only be distinguished later; but even then the ascriptions of functions and attributes changed somewhat arbitrarily. Only gradually was there a consolidation of name, function and attribute:

The three or four titanic muses

The travel writer Pausanias (around 115–180 AD) handed down a presumably older triad of the muses under the following names and areas of responsibility:

They are said to have been the daughters of Zeus (or Uranus ) and Plusia , hence their name. Plato, on the other hand, groups Hesiod's Terpsichore , Erato , Kalliope and Urania into four numbers.

Apollo as leader of the nine muses and a Dionysian Thiasos , Alexandrian book cover, sixth century

The three or four Apollonian muses

They represent the three strings of the lyre of Apollo and are said to have lived on the Helicon . The first sentence of the name goes back to Eumelus of Corinth (seventh century BC), the second to Plutarch , he also gives there a fourth muse:

Nete, Mese, Hypate, as elements of the Tetraktys, play an important role in ancient music theory . As a fourth, the paramesis was occasionally added, since the number of strings of the lyre and the music theory based on it were variable.

The seven or nine Pierian muses

In another tradition there was a group of seven muses, who are said to have been mentioned according to Johannes Tzetzes of Epicharmos (fifth century BC), the so-called Pierian muses or Pierids with the following names:

These seven are the daughters of Pieros , the patriarch of the Thracian people of Pieres or Piereíes ( Πίερες Θράκες, Πιερείες ), later by the Macedonians into northern coast beyond the Strymon were expelled, and a pimpleischen nymph named Antiope have been ( Cicero , de natura deorum , III 54). The ancient town of Pimpleia is assumed to be on the site of today's Litochoro and also gave the Muses the nickname of the Pimpleiden .

On the other hand, Ovid knows nine Pierian muses, whose mother Euippe is said to have been; they come from Egypt and challenge the “younger” Olympic muses (competition of mnemonids and pierids). After their defeat, they are turned into magpies as punishment for their arrogant behavior. These nine daughters of Pieros were also equated to birds and occasionally bore the names: Colymbas, Lyngx, Cenchris, Cissa, Chloris, Acalanthis, Nessa, Pipo and Dracontis .

Development and reception of the concept of the muse 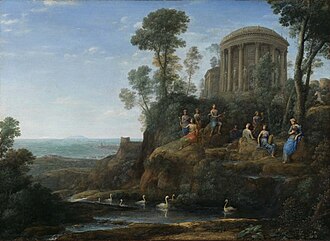 Apollo and the Muses on the Helicon (or Parnassus) , oil painting by Claude Lorrain , 1680

While the names of the muses in Hesiod only emphasize aspects of dance and poetry, in later antiquity they are related to different musical instruments and genres, from which the canonical assignment of "areas of responsibility" of the muses emerges.

The muses belonging to Apollon's entourage are said to be found on the Boeotian mountain Helikon at the source Hippocrene , which was exposed by a hoof beat of the winged muse steed Pegasus . Hence the name Helikoniades, which is sometimes used for them . According to other sources, the Muses live on Parnassus , which is dedicated to Apollo, above Delphi , near the Castalian spring , the water of which is said to give enthusiasm and poetry.

The sanctuaries of the muses are called Museion (from which today's word museum arose), and the German word music  - from μουσικὴ τέχνη , the "art of the muses" - owes its name to the goddesses. As personification or tool a muse can muse be considered. The Romans equated the Muses with the Camenae .

Call of the Muses in Poetry

Dante, Homer and Virgil - detail from the fresco Parnassus by Raphael

Ancient Greek epics and hymns often begin with an invocation of the muse. This is how Homer's Odyssey begins with the famous and much-quoted verses: Tell me, Muse, the deeds of the well-traveled man / Who erred so far after the destruction of St. Troy . Several Roman poets also ask the muse for inspiration (Virgil in the Aeneid ) , or for duration for their poem ( Catullus in the Carmina ).

After the muses were ostracized by the medieval church, poets of the modern age such as Dante , Shakespeare , Milton followed this practice again. The nine chants by Goethe's Hermann and Dorothea bear the names of the nine muses. If Klopstock makes use of the invocation in his Messiah by forcing the immortal soul instead of the muse (“Sing ', immortal soul, redemption of humanity”), Vladimir Nabokov in the title of his autobiographical work Speak, Memory also alludes to Mnemosyne, Goddess the memory and mother of all muses.

The Olympic muses in hexameters

In German humanistic grammar schools , the muses were part of the curriculum. Before 1839, an (anonymous) German poet had put the names of the muses and their definitions in the following hexameters that were memorable for the students :

Klio teaches the history of peoples; tragic games
are sacred to Melpomene, comical ones are Thalia's love:
the calliope sounds battle songs with a proud dromete;
Dancer protects Terpsichore, flute player Euterpe
Erato sings lovers' happiness; Urania walks
among the stars; Polyhymnia (Polymnia) rules in the realm of the speakers.

It is an analogous translation from Latin.