The moss ferns ( Selaginella ) are a genus of plants that belongs to the club moss plants (Lycopodiopsida). Moss ferns are the only genus of the moss fern family (Selaginellaceae) and the order of the moss ferns (Selaginellales). The genus includes around 700 species worldwide . They are mostly small, herbaceous plants that are characterized by their heterospore , that is, different types of spores . The main distribution area are the tropics , with relatively few species in the temperate zones.

The moss ferns resemble some mosses in their habitus , which is reflected in the first part of the generic name. However, in their anatomical features and reproduction, they are clearly vascular spore plants .

At the bifurcation points of the shoot, there are often cylindrical, elongated, downward-facing colorless and leafless shoots, the root carriers or rhizophores. As shoot axes, these arise exogenously (on the surface) - in contrast to the endogenously (inside) emerging roots - and also branch out forked. There are tufts of roots at their ends .

The vascular bundles of the stem axis can form a central protostele , but also a thistle or siphonostele . There is no secondary growth in thickness . Real trachea in which the transverse walls between the cells are dissolved, while the side walls have the characteristic step-shaped thickenings, occur very rarely . The endodermis of some species (such as Selaginella kraussiana ) is formed by tubular cells with Caspary's stripes ( trabeculae ).

The leaves are small and scale-like ( microphylls ). They sit screwy or - more often - opposite in four rows on the stem axis. Usually there are two rows of small upper leaves and two rows of large lower leaves ( anisophylly ). In recumbent forms, the underside of the upper leaves points upwards, and the lower leaves face upwards . The leaves have an unbranched midrib. The mesophyll is only rarely differentiated into sponge and palisade parenchyma , but is usually similar to the sponge parenchyma . The epidermal cells have chloroplasts , often only one bowl-shaped per cell. In the mesophyll, too, the cells of some species have only one bowl-shaped chloroplast. In the axilla at the base of the leaf surface sits a small, membranous, chlorophyll-free scale (ligula). In some species it has a direct connection to the tracheids of the stem axis and is used for rapid water absorption after rainfall.

Many microspores develop in the flattened microsporangia, which are spread over with two flaps after opening.

The sporangia wall is composed of three layers of cells, the middle one being very narrow in the mature sporangium. The innermost is the layer of wallpaper , which serves to nourish the developing spores, but remains intact and does not dissolve, i.e. it is a secretion wallpaper . The sporangia are opened by a cohesion mechanism along a line indicated above. The spores are thrown out. In some species, however, the megaspores remain on the mother plant ( S. rupestris ), so that the embryos germinate on the mother plant.

S. stolonifera (A – E): germination of microspores. p prothallium cell, w antheridium wall cell, s spermatogenic cell. A, B, D from the side, C from the back. In E, the prothallium cell is not visible, the wall cells dissolved and surround the spermatozoid mother cells. F S. cuspidata , spermatozoids.

The gametophytes are greatly reduced and do not or hardly leave the spore wall, so they are endospore .

The microspores usually develop further in the sporangium. The spore cell divides into a small, lens-shaped cell, which alone represents the prothallium and is usually interpreted as a rhizoid , and into a large cell, from which the only antheridium arises. It forms eight sterile wall cells and two or four central spermatogenic cells. The latter divide several times and form the rounded spermatozoid mother cells. The wall cells dissolve and form a layer of mucus in the center of which are the spermatozoid mother cells. The prothallium cell remains, however. The whole is still surrounded by the spore wall. If the microspore wall breaks open, the mother cells also release the spermatozoids . These are club-shaped, slightly curved and have two long flagella . 128 to 256 spermatozoids are formed per microspore.

Some of the megaspores begin their development in the sporangium. The development can differ - depending on the species. A megaspore is about ten times the diameter of a microspore. The female prothallia are therefore less reduced than the male. The cell nucleus is initially located at the vertex of the spore. It is divided into many daughter nuclei through free core divisions, which are distributed downwards along the wall plasma. After or during this process, cell walls begin to form from the vertex. First of all, large prothallial cells are formed, which then divide into small cells. A few archegonia are then formed at the apex . The archegonia usually only forms when the spores have left the sporangium. The spore wall then bursts open at the vertex along the three edges of the spores, and the prothallium swells a little beyond the edge of the spores. The prothallium is and remains free of chlorophyll. It forms three humps on which rhizoids sit. Their function is to absorb water and also to anchor the prothallium. In some species (such as Selaginella galeotti ) these humps are “arms” protruding far from the shell. One or two archegonia will be fertilized. As with all vascular spore plants, this requires the presence of water so that the spermatozoids can reach the egg cell in the archegonium.

After fertilization, the zygote divides into two cells: the upper one increases in size, divides a few more times in the lower area and develops into an embryo carrier ( suspensor ); the lower cell develops into the actual embryo , which is very soon divided into a pair of leaves, the apex of the shoot, the root and the foot. The first pair of leaves in the embryo already has the ligules described above.

The suspensor pushes the embryo into the prothallium, which is used for nutrition. The embryo absorbs the nutrients with its foot. The apex of the shoot grows upwards, the roots downwards out of the megaspore; the young seedling initially remains anchored with the foot in the prothallium tissue. It thus resembles a germinating seed plant. 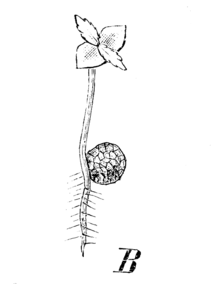 S. denticulata , seedlings with the megaspore

The moss ferns have their main distribution in the humid tropical forests and grow as ground cover. Some species also occur in temperate latitudes. The Central European species grow mainly in patchy lawns, on rocks and walls. Few species are adapted to dry locations. An example of this is the loggerhead rose from Jericho ( Selaginella lepidophylla ) from Central America, the shoots of which curl up when dry.

The genus Selaginella contains 690 species (as of October 2015). The greatest variety of forms can be found in the tropics. There are only five species in Europe, of which only the first two are native to Central Europe.

The following two species are cultivated and occasionally feral in Europe: 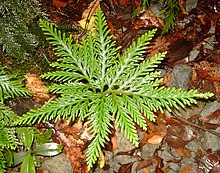 The oldest fossils of the Selaginellales are known from the Carboniferous 300 million years ago. Selaginellites were already heterosporous and looked very similar to today's species. Otherwise the fossil record of this herbaceous clan is very sparse.

The name Selaginella is the diminutive of the Latin selago = fir-club moss , based on the similar appearance.

The moss ferns are of no major economic importance. Some species are cultivated as evergreen ornamental plants and, especially shortly before New Year's Eve, brought onto the market as so-called lucky moss , such as Selaginella martensii , Selaginella willdenowii , Selaginella kraussiana and Selaginella uncinata . Several are used as hanging plants. Since they are sensitive to frost, they are usually not grown outdoors. The Loggerhead Rose of Jericho is also available in stores.