The bear moss plants ( Lycopodiopsida ) are a class of vascular plants . It currently consists of three families with herbaceous representatives. In the Carboniferous Age , tree-shaped representatives dominated large areas of the northern hemisphere, they were the basis for today's hard coal deposits in these areas.

As with the other vascular plants, the sporophyte is the dominant generation here. The sporophyte is usually forked (dichotomous). The shoot axes carry simple, not articulated leaves that are small and narrow ( microphylls ). In terms of habit , the bear mosses are similar to mosses , but are not more closely related to them than the other vascular plants. Today's representatives are usually small and herbaceous, but the fossil representatives also included trees 40 meters high.

The sporangia stand individually in the armpits or at the base of leaves (sporophylls). The sporophylls are usually united at the end of shoot sections to form sporophyll stands ("bloom"). There are exceptions for some fossil groups. Most groups are isospore , so they only develop spores of the same size. Some groups, the moss ferns and Isoetales , are heterosporous , so they develop large female and small male spores. The spermatozoids are usually two flagellated , a distinguishing feature to the ferns , the other group of vascular spore plants. Only Isoetes has multi-flagellated spermatozoids.

The recent representatives of the class are divided into three orders , to which currently only one family belongs:

There are also four orders of extinct club moss plants: 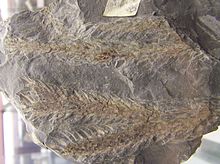 The oldest representatives of the bear moss plants have been known since the Silurian , from the middle Devonian onwards , together with the calamites , they replaced the psilophytes as the predominant group. In the original representatives, the leaves and the sporophylls were still forked. Some tree-like representatives are among the main representatives of the hard coal forests of the Carboniferous . In the Carboniferous the club moss plants had their greatest diversity, especially in the order Lepidodendrales with the "shed trees" of the families Lepidodendraceae and Diaphorodendraceae , and the "seal trees" (in the family Sigillariaceae ). Some tree-shaped species still reach the Rotliegend , since then there have only been herbaceous representatives.