The Clubmosses (Lycopodiaceae) are the only extant family of the order Bärlappartige (Lycopodiales). Together with the Isoetales and Selaginellales , they represent the still living representatives of the bear moss plants (Lycopodiophytina). The oldest bear moss plants are known from deposits ( Ludlow , Silurian ) in Australia that are around 420 million years old .

The Bärlappgewächse are herbaceous, evergreen plants. The branching is forked (dichotomy), but one side shoot tops the other, so that apparently monopodial shoots occur. As a rule, the rungs are creeping. Secondary growth in thickness does not occur. The roots are usually mycorrhizal . They are also dichotomously branched and grow with a group of initial cells.

The vascular system in the stem axis is a plectostele . The sieve cells in the phloem have sieve fields on the longitudinal walls, but no sieve plates. The plectostele is surrounded by a sheath made of unwooded cells. Outwardly, there is an endodermis made up of one or two cell layers with thin, but lignified cell walls. As with all vascular spore plants , the endodermis corresponds to the innermost layer of bark . The outer cortex is made up of heavily lignified sclerenchymal cells.

The leaves are dense and irregular on the stem axes. They are needle-shaped microphylls . They have an unbranched midrib. Only in a few species is the mesophyll differentiated into palisade and sponge parenchyma. The epidermis cells have no chloroplasts . 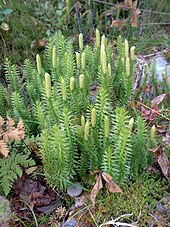 In Lycopodium , some shoots grow negatively gravitropically , i.e. vertically upwards. A dense, spike-shaped sporophyll stand (flower) is formed above a region with few leaves. The apex of the shoot is used up and no further growth of this shoot is possible. Huperzia forms sporophylls or trophophylls on upright sprouts, depending on the season .

At the base of the sporophyll there is a sporangium , which is often flattened and kidney-shaped. Numerous meiospores are formed in it, all of which are of the same size (isospore). The sporangia wall is several cell layers thick (eusporangiat), and a secretion tapetum is attached to the inside . The opening of the sporangium occurs through a longitudinal tear, the location of which is anatomically pre-formed.

The club moss spores stay together in tetrads until they are ripe. The exospor is multilayered and covered by network-like thickening strips.

The spores germinate only after six to seven years. The spore first divides into five cells and then enters a resting phase that is only reversed after the mycorrhiza has formed. Then the gametophyte, called the prothallium , develops . It grows underground and is a white nodule that feeds heterotrophically on the mycorrhizal fungus. In some species the prothallium breaks through the surface of the earth and turns green. The prothallium is around 2 centimeters in size, lobed in bulges and covered with tubular rhizoids that serve to absorb water. Sexual maturity occurs after 12 to 15 years. A prothallium forms both female archegonia and male antheridia , so it is monoic . The mostly numerous sexual organs are located at the tip of the prothallium. The multicellular antheridia are sunk into the tissue and form oval, two-flagged spermatozoids . The archegonia, which are also sunken, usually have numerous cervical canal cells.

The embryo is pressed further into the tissue of the prothallium by a suspensor. The embryo forms a haustorium with which it absorbs nutrients from the prothallium. The first root arises sprout (primary homorhizia ).

The family is cosmopolitan. Most species grow terrestrially on the ground , some also on rocks (epilithic) or on plants ( epiphytic ).

The family includes four genera with 380 to 400 species. Nine of them are native to Central Europe.

The fossil genus Lycopodites from the Upper Devonian was morphologically very similar to the recent representatives. The family has remained relatively unchanged over 300 million years. Most of the diversity, however, did not emerge until a recent geological period, as most Huperzia species in the tropics live as epiphytes on trees, which is considered a relatively young adaptation.

Huperzia is a paraphyletic taxon while Lycopodium and Lycopodiella are monophyletic. The relationships are shown in the following cladogram .