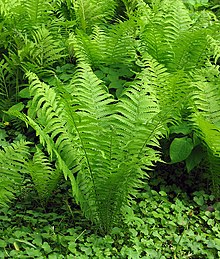 The vascular spore plants (Pteridophyta) or fern-like plants were a systematic large group of vascular plants for a long time . It comprised the spore-forming vascular plants (as opposed to the seed-forming): bear moss plants and ferns . However, the two groups are not closely related, the ferns are more closely related to the seed plants than to the club moss plants. Therefore, vascular spore plants are no longer considered a taxonomic group today.

Fern plants are primarily adapted to rural life, and much more so than mosses . In her generation dominates Sporophyt , so the diploid generation.

The gametophyte, the haploid , sexual generation, is called here prothallium . In contrast to the seed plants, the gametophyte represents a completely independent form of life from the sporophyte, which mostly feeds itself autotrophically or, more rarely, saprophytic . It is usually short-lived and only lives a few weeks old. If there is no fertilization, it can last for a few years. It grows to a maximum of a few centimeters and is usually thallous , which makes it resemble a thallous liverwort . There are numerous variations, but the typical structure is as follows: The prothallium is a simple, green thallus that has rhizoids on the underside with which it is attached to the ground. On the underside of the prothallium, numerous sexual organs, the gametangia, develop . The (male) antheridia produce mobile spermatozoids and the (female) archegonia produce sessile egg cells . The fertilization is water dependent.

Shortly after the first cell divisions of the zygote, the embryo forms a haustorium (foot) as well as a root apex, a trunk apex and a leaf apex. From these the first root, the trunk and the first leaf (cotyledons) develop. The root does not develop as with the seed plants, but arises endogenously from the shoot. The vascular spore plants thus have a primary homorhizia .

In most representatives, the three basic organs grow with parietal cells , not with meristems . Branches are forked or laterally, but never from the leaf axils. The roots have a root cap . The lateral roots do not arise in the pericycle, as in the case of seed plants, but in the innermost layer of bark. The leaves are similar to those of the seed plants: They have a cuticle and stomata , but the epidermal cells mostly have chloroplasts . The vascular bundles are well differentiated. The xylem consists of tracheids , rarely (for example with Pteridium ) tracheas are also present. Concentric vascular bundles with inner xylem are predominant. The cell walls are reinforced with lignin .

Secondary growth in thickness by means of cambium occurs only rarely and weakly in recent groups. It was common in some fossil groups.

The sporangia are mostly formed on leaves, only in the most primitive groups directly on the shoot axes. The sporangia themselves are very diverse. The leaves that carry sporangia are called sporophylls and are often more simply built than the purely assimilating leaves ( trophophylls ).

The spores are mostly yellowish to brownish and usually free of chlorophyll. The wall is divided into an inner endospor and a resistant outer exospor, on which a perispor (perine) is placed.

In most groups the spores are similar (isospore), from them hermaphroditic prothallia develop. Dioecious groups have developed several times independently, in which the prothallia are purely male or female. In some groups, this has also resulted in two spore forms (heterosporia): large, nutrient-rich female megaspores and small, male microspores. These are formed separately in mega- or microsporangia.

The vascular spore plants are a paraphyletic group, that is, they do not include all the descendants of their last common ancestor.

The following groups belonged to the vascular spore plants:

The last four classes are now often grouped together as a separate group of ferns (monilophytes), as they are clearly monophyletic. They are the sister group of the seed plants, with which they are summarized in the group of Euphyllophyten. Their sister group are the bear moss plants.