The Fork Leaf Family (Psilotaceae), also called Urfarne , are a family of the class Psilotopsida , which belongs to the ferns . Due to the lack of roots, their reduced leaves and the forked branches, they appear very primeval.

The fork-leaf family (Psilotaceae) are the least complex vascular plants of the recent land plants. The sporophyte is persistent and has no roots . It forms rhizomes on which rhizoids sit. The embryo also has no roots. The stem axis is low and dichotomously (forked) branched. There is no real dichotomy here; instead, in addition to the old vertex cell, a neighboring cell is determined to be the second vertex cell. The axis carries reduced leaves with or without a vascular bundle . The above-ground axes have an actinostele or almost a siphonostele, with the pulp being lignified. 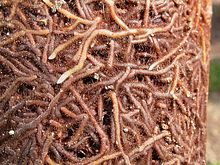 Axes of psilotum with sporangia

The sporangia are large, their wall is two cell layers thick (eusporangiat). There is no annulus as an opening mechanism. Two to three sporangia are fused to form a synangium and appear to be on the adaxial (towards the shoot axis) side of a fork blade. A tapetum is missing. The spores are nourished by sterile Archespora cells.

The spores are all the same size (homospor), kidney-shaped, monolet (have a scar). There are too many (over 1000) formed per sporangium.

In Psilotum the gametophyte grows underground, is not photosynthetically active and feeds on the mycorrhiza . The gametophytes grow to a few centimeters and are cylindrical and branched. The antheridia sit on the surface and are multi-chambered, the spermatozoids are multi-flagellated. The archegonia are small and sunken. Strongly developed gametophytes have vascular bundles with lignified ring tracheids and an endodermis.

The basic chromosome number is x = 52.

The fork-leaf family occurs predominantly in the tropics and lives terrestrially or epiphytically .

The systematic position of the fork-leaf plants was controversial for a long time. Sometimes they were even regarded as the basal group of vascular plants with the primeval ferns . However, molecular biological studies have clearly placed them on the ferns , where they form the sister group of the adder tongue family .

The family contains the two genera with about 12 species:

No fossils are known of the fork-leaf plants . On the basis of molecular clocks it was calculated that they had already separated from their sister group, the adder tongue family , in the carbon .