The legionellosis is an infectious disease caused by bacteria of the genus Legionella ( Legionella is caused), and the well can be treated with antibiotics usually. By far the most common pathogen (90% to 95% of cases) is Legionella pneumophila (especially serotype 1). Other legionella that are pathogenic to humans are Legionella micadei, L. bozmanii, L. dumoffii and L. longbeachae.

Several forms of Legionnaires' disease can be distinguished. The two most important forms are Legionnaires' disease , which is characterized by pneumonia caused by a droplet infection and can take a life-threatening course if left untreated, as well as the rarer, without pneumonia and usually mild Pontiac fever . In rare cases, Legionella can also cause infections such as inflammation of the wound , the inner lining of the heart (endocarditis) and inflammation of the renal pelvis (pyelonephritis) .

The Legionnaires' disease was first described in 1976. It was named after a meeting of the American Legion , a US war veterans association that took place from July 21 to 24, 1976 at the Bellevue Stratford Hotel in Philadelphia . At that time, 181 elderly people were suffering from life-threatening pneumonia. They were all either at the veterans' meeting or at the hotel. The epidemic, with the cause unknown at the time, alerted the American health authorities and the Centers for Disease Control and Prevention in Atlanta , so that the cause of the disease was intensively researched. In 1977 Charles C. Shepard and Joseph E. McDade were able to identify Legionella pneumophila as the pathogen. This could have settled in the cooling water system of the neglected air conditioning of the hotel. In retrospect, several other epidemics have been attributed to Legionnaires' disease, such as one at St. Elisabeth's Hospital in Washington, which killed eight people in 1965.

The Pontiac fever was described as early as 1968th The disease got its name after an outbreak in the city of Pontiac , Michigan .

An increased number of colonies in drinking water is mostly due to a lack of water circulation and water temperatures in the range of 25 to 50 ° C. In excessively large hot water tanks or pipelines, the water remains longer and the organisms have more time to grow. Even if there is little or no water withdrawal at times, there is stagnant water and thus water temperatures that further promote colony growth.

In Germany , according to Section 7 of the Infection Protection Act (IfSG), direct or indirect evidence of an acute infection by Legionella sp. Notifiable by the diagnosing laboratory if the evidence indicates an acute infection. Reportable diseases have been recorded by the Robert Koch Institute since 2001, which reported a total of 475 reported Legionnaires in 2004. The numbers show a rising trend: in 2012 the RKI registered 654 confirmed cases, in 2013 there were 917; In 2017 there were 1282 diseases and in 2018 1436 infections. The head of the investigation center in which the evidence was provided is obliged to report ( Section 8 IfSG). In Saxony, illnesses and deaths from legionnaires are also notifiable.

Legionnaires' disease in Austria is a notifiable disease in accordance with Section 1 (1) No. 2 of the 1950 Epidemic Act . Cases of illness and death must be reported. Doctors and laboratories, among others, are obliged to report this ( Section 3 Epidemics Act).

In Switzerland, the disease Legionellosis notifiable and that after the Epidemics Act (EpG) in connection with the epidemic Regulation and Annex 1 of the Regulation of EDI on the reporting of observations of communicable diseases of man . Doctors, hospitals, etc. are required to report.

Legionnaires' disease is a severe form of pneumonia that affects heavy smokers and people who suffer from immunosuppression or kidney failure . Although the infection can occur at any age, the disease tends to occur in middle age. Men get sick two to three times more often than women.

The transmission does not take place via contact persons, but through inhalation of the legionella. Since the Legionella prefer to multiply in warm water (optimum at 36–43 ° C), swimming pools, whirlpools, air conditioning systems and showers in particular harbor an increased risk of infection. During the infection, atomized water droplets are inhaled together with the legionella (airborne transmission path); unintentional inhalation of swallowed water ( aspiration ) is possible. As a result, epidemics are possible, especially in summer, but infections such as those in Stede Broec (Netherlands) in 1999 cannot be ruled out during the rest of the time .

When traveling to areas with poor hygiene standards, it is advisable to run hot tap water (shower / washbasin) through for about 10 minutes when moving into a hotel room. During this time, however, you should not be nearby so as not to inhale the aerosol .

In 2011, 639 cases of Legionnaires' disease (confirmed by laboratory diagnostics) were reported in Germany. In 2017, however, there were 1282 cases and in 2018 1447 records were reported. 1543 diseases were recorded for 2019. Of the known cases of Legionella pneumonia, the disease ended fatally in around 10-15% of cases. In the mild form of Pontiac fever without pneumonia, no deaths are known to date.

In August 2013 the worst legionnaire's disease outbreak in Germany occurred in Warstein due to germs in the recooling plants of two companies. There were three deaths in 153 sick people.

In 2005, a CAPNETZ study extrapolated from its results 15–30,000 Legionella pneumonia (i.e. 4% of all pneumonia) per year and further expected 1500–3000 deaths per year with a 10% mortality. As a result, over 96% of Legionnaires would not be recognized despite the obligation to report.

The pathogen that causes this disease is a rod-shaped bacterium found in freshwater . The most common species is named after the organ affected, the lungs , Legionella pneumophila ( pneuma breath, phil- loving). The second most common is Legionella micdadei .

Legionella occurs naturally in fresh water worldwide, the number of pathogens is decisive for the disease-causing factor. This is too low in normal ambient water, but under favorable conditions the pathogens can multiply explosively, for example in air conditioning systems.

Standing water in technical installations (especially air conditioning systems and little-used water pipes) with temperatures between 35 and 45 ° C provides ideal conditions for the pathogen to multiply. Infection occurs through inhalation of atomized water, for example in the shower or from a humidifier . A transmission from person to person has not yet become known and is considered unlikely. The pathogen is particularly dangerous for people with a weakened immune system and affects the alveoli .

Legionella generally do not survive temperatures that are permanently over 60 ° C or temporarily over 70 ° C. Temporary heating of the water to 70 ° C, installation of circulation lines to avoid long stub sections in which the hot water cools down, and low-aerosol shower heads counteract the risk of infection in new installations in Western Europe.

The course of the disease is determined by virulence-associated epitopes . The bacteria are able to hide from the immune response within body cells and multiply there. To this end, they also manipulate the host's protein synthesis by altering histones .

The laboratory chemical detection is best done via an antigen detection in the urine (gold standard), the test is positive early on. However, it can also be detected using a sputum culture . 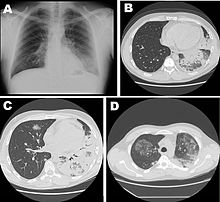 Different stages of the disease of legionnaires' disease: X-ray of the lungs (A) and high-resolution computed tomography (B) at the time of hospitalization. Computed tomography repeated one week later (C, D), a 42-year-old male patient with severe left-sided pneumonia caused by Legionella pneumophila serogroup 11a.

After an incubation period of 2 to 10 days, Legionnaires' disease has a relatively rapid onset, usually out of complete well-being. The symptoms with which the disease presents are unspecific and very variable. In most patients, the disease begins with a relatively high fever and chills (body temperatures of over 40 ° C are not infrequently reached), with muscle pain (myalgia), which are mainly localized in the chest area (chest pain), and with an initially dry irritation cough , which after a few days can turn into cough with moderate sputum . The sputum can be bloody ( haemoptysis ) and, in combination with chest pain, easily lead to the misdiagnosis of pulmonary embolism . In addition, it can lead to shortness of breath , headaches , nausea and vomiting , diarrhea and various neurological deficits.

The mild disease course with Legionella is known as Pontiac fever . It is named after the location of the first documented epidemic, the city of Pontiac in the US state of Michigan. This results in mild, flu-like symptoms without pneumonia. So far, Pontiac fever has not resulted in death in any known case.

The incubation period is 1–2 days.

Legionnaires' disease must be treated with antibiotics, as the disease can be life-threatening. For a long time, erythromycin was considered the first choice antibiotic. Other antibiotics effective in legionellosis are the macrolides azithromycin , clarithromycin , roxithromycin and broad-spectrum fluoroquinolones (e.g. ciprofloxacin , levofloxacin ). Also rifampicin (as an additional antibiotic to erythromycin) and tetracyclines such as doxycycline and tigecycline are effective, but are not considered as first choice.