Erythromycin is a mixture of structurally very similar compounds that are formed by the bacterium Saccharopolyspora erythraea . Because of its antibiotic effects, erythromycin is used as a medicinal substance.

In 1949 the Filipino scientist Abelardo Aguilar sent soil samples from the province of Iloilo to his employer, the pharmaceutical company Lilly . There a working group under James M. McGuire isolated erythromycin from culture filtrates as a metabolic product of Streptomyces erythreus (today Saccharopolyspora erythraea ). Marketed as Ilosone since 1952 , Lilly received US Patent 2,653,899 for this compound in 1953 . Other trade names were Erycinum ( Schering ) and Erythromycin ( Abbott ). The total synthesis of erythromycin was achieved by Robert B. Woodward and co-workers in 1981.

Erythromycin inhibits the translocation process during translation, which is catalyzed by the elongation factor EF-G. EF-G has the function of a GTPase , i.e. it causes GTP to break down into GDP + P i . The energy released is used to detach the free tRNA molecules from the ribosome and thus enable it to move. A lack of the elongation factor prevents protein biosynthesis .

Erythromycin acts against gram-positive germs, against a few gram-negative germs ( Bordetella , Legionella , Chlamydia ) as well as against mycoplasma and some rickettsiae . It is a narrow-spectrum antibiotic.

Oral therapy is indicated for by erythromycin-sensitive pathogens infectious diseases caused of the ear, nose and ear region ( ear infection , sinus infection ), deep airways ( bronchitis , pneumonia ), of the conjunctiva in erysipelas ( Erysipelas ), diphtheria , severe forms of Acne vulgaris and certain forms of urethritis. When (more effective) other antibiotics cannot be given, e.g. B. in penicillin allergy, erythromycin is also indicated for the treatment of inflammation of the pharyngitis or tonsils ( tonsillitis ), scarlet fever or syphilis .

If oral administration is not possible, erythromycin can be administered parenterally.

Erythromycin is used topically in particular in the treatment of inflammatory forms of acne .

Erythromycin can also be used for motility and emptying disorders of the stomach when the first-line drugs metoclopramide and domperidone do not improve. However, the use of erythromycin as a prokinetic takes place under the conditions of off-label use . Erythromycin binds to the motilin receptor even in subantibiotic doses and thus promotes gastrointestinal peristalsis, relaxes the pyloric muscles and coordinates the motor activities of the stomach and duodenum.

Interactions and side effects

Erythromycin is an inhibitor of the cytochrome P450 3A4 , 3A5 and 3A7. Thus, the biotransformation of drugs in which this enzyme is involved, e.g. B. Ciclosporin , Diazepam , Lidocaine , Warfarin u. v. a., impaired, which leads to the accumulation of active substances and to the intensification of main and side effects.

However, cardiac arrhythmias can also occur as a result of increasing the QTc time .

What the erythromycins have in common is a 14-membered lactone ring without double bonds (erythronolide structure). This is methyl-branched at every second C atom and is glycosidically linked at C-6 with the amino sugar desosamine and at C-4 with a neutral sugar (erythromycin A and B: cladinose , erythromycin C and D: mycarose ).

Erythromycin A is sparingly soluble in water and forms colorless to slightly yellowish crystals.

The erythromycins are stable when dry, but gradually decompose in solution even at room temperature. Degradation occurs rapidly when heated above 60 ° C and in acidic or alkaline solutions.

Erythromycin is mainly excreted in the biliary with a half-life of 1.5 to 2.5 hours. Therefore administration is indicated every 6 hours.

Erythromycin base is not acid stable, so that for the peroral treatment with either enteric-coated dosage forms need to be come or application but acid-resistant derivatives of erythromycin used in drug production: so are the esters of the hydroxy group at the C-2 'of the Desoxamins, erythromycin stearate and Erythromycinethyl succinate and Erythromycin estolate, the dodecyl sulfate salt of erythromycin propionate, used in tablets, capsules and suspensions. The esters are prodrugs because the free 2'-OH group of the amino sugar is important for the bond.

Water-soluble salts such as erythromycin lactobionate are used for the production of parenteral dosage forms.

Erythromycin as a free base is used in preparations to be used externally, for example in alcoholic solutions, gel , cream or ointment bases (e.g. for topical acne therapy ).

The ring-substituted azithromycin differs from erythromycin A in that the erythronolide structure is extended by a carbon atom between C-9 and C-10, the carbonyl function at C-10 is replaced by a methylamino group (azalide).

The erythromycin precursor is synthesized by a modular polyketide synthase. Such an enzyme has numerous active centers , organized in several modules, which build up the carbon structure as if on an assembly line. The enzyme deoxyerythronolide B synthase (DEBS), which is involved in the biosynthesis of erythromycin A in Saccharopolyspora erythraea , consists of 6 modules, a loading module and a release module (8 in total). There are 28 active centers in the large enzyme complex: 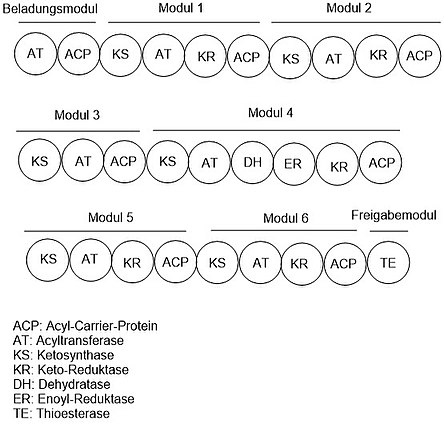 In the loading module , propionyl-CoA is loaded onto the DEBS enzyme with elimination of HS-CoA . Six more propionyl groups are added and modified over the six modules until a C15 chain is present. The substrate moves linearly through the modules, comparable to assembly line work. The release module cyclizes the chain to a fourteen -membered lactone heterocycle, 6-deoxyerythronolide B (6dEB). This lactone is released by the enzyme and modified to erythromycin A in just a few steps.

The function of the active centers are briefly explained below. The reaction types are in brackets:

Provision and coupling of propionyl groups

The carbon backbone is made up only of propionyl groups. The cell starts with propionyl-CoA. All other propionyl groups are obtained from methyl-malonyl-CoA . The following scheme shows the coupling of two propionyl units. The numbers in the subscript of the enzymes refer to the module. 0 = loading module, 1 = module 1 (see diagram above).

The following scheme shows the entire reaction path from propionyl-CoA to 6-dEB and finally to erythromycin A. The provision of methyl-malonyl-S-ACP is no longer explicitly shown. 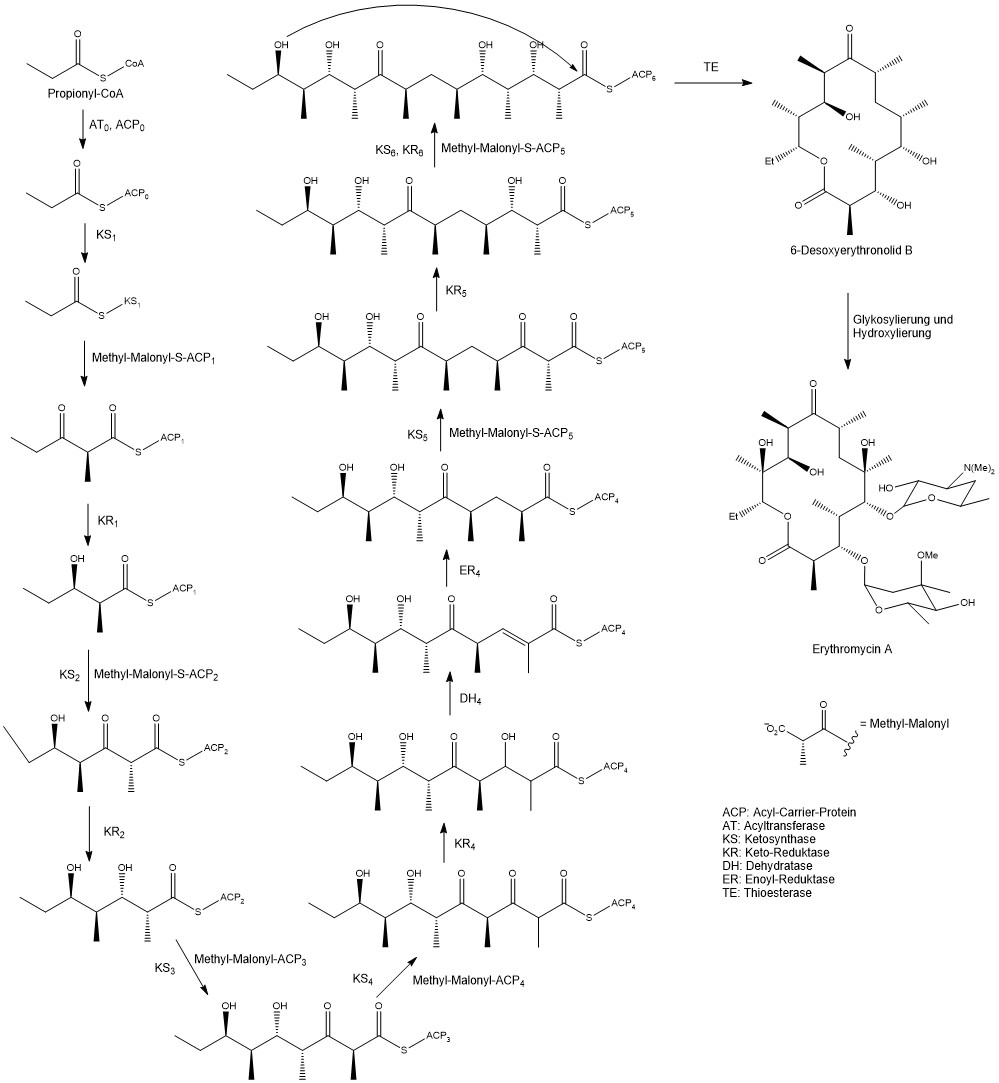