Streptomyces is a very species-rich genus of Actinobacteria . The species in this genus are gram-positive , aerobic , mycelium- forming, multicellular, form spores and have a high GC content . They occur mainly in soils , where they form fragrances, especially geosmin , with the characteristic odor of the forest soil. Numerous Streptomyces species produce antibiotics that are used in human and veterinary medicine.

The representatives of the genus Streptomyces are gram-positive bacteria. As with many representatives of the Actinomycetales order , Streptomyces also develops cells in the form of filaments. These elongated and branched cells form plexuses, which are also known as mycelium . The filaments have a diameter of 0.5 to 1.0 µm and often no transverse walls in the growth phase.

Similar to fungi , a distinction can be made between two types of growth of Streptomyces : The substrate mycelium , which spreads in the liquid or solid nutrient medium, and the aerial mycelium that grows into the gas space above. In older cultures, transverse walls are again formed in the cell walls at the ends of the filaments of the aerial mycelium, so that chains of several, mostly spherical spores are formed by segmentation . These spores, which are to be regarded as bacterial exospores , therefore differ fundamentally from the endospores , which z. B. be formed by the bacterial genera Clostridium and Bacillus .

As a representative of the Actinomycetales in the Actinobacteria department , Streptomyces is one of the bacteria with a high GC content , ie a high proportion of the nucleobases guanine and cytosine in the bacterial DNA . Genetic studies have shown a GC content of 69 to 75 mole percent. 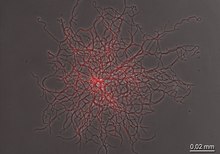 Hyphae from a strain of Streptomyces that synthesizes a red, cytotoxic compound

The complete genome of Streptomyces coelicolor was sequenced and published in 2002. The genome of Streptomyces avermitilis has also been sequenced. It contains most of the genes of all bacteria examined so far. Another feature that is rare for prokaryotes is that the chromosome is linear rather than circular. The genome of the species examined so far is extraordinarily large for bacteria, the genome size of the bacterial chromosome in Streptomyces coelicolor is 8668 kilobase pairs (kb), which is almost twice the genome size of Escherichia coli (4600 kb).

Streptomyces occurs mainly in soils . Many species form fragrances, especially geosmin , with the characteristic odor of the forest soil.

The genus Streptomyces is very species-rich. Currently (as of 2013) more than 600 species and subspecies are known. In the bacteria database kept as a reference for the systematics of bacteria , the species are divided into three files. Streptomyces albus is the type species of the genus.

Here are some examples of species that are important as antibiotic producers:

By molecular biological studies is checked whether the variety of species inventory, or whether some species are so closely related to each other that they become a kind - should be combined - possibly with subspecies. The methods used in an investigation from 2010 include DNA – DNA hybridization and multi- locus sequence analysis (MLSA). The hybridization technique serves to demonstrate the structural relationship of nucleic acids and thus to elucidate the phylogenetic relationship. In the MLSA, the investigation is limited to certain genes that are particularly typical of a species or genus. Sequence analysis of the 2010 was limited to the detection of five housekeeping genes (English housekeeping genes , non-regulated genes regardless of cell type, cell stage and external influences expressed are). As a result of the investigation, it was proposed to combine the 29 species and three subspecies on which the investigation was based into only eleven species.

The species " Streptomyces sudanensis ", which is significant for human medicine, has not yet been published in accordance with the rules of the International Code of Nomenclature of Bacteria (ICNB) and is therefore placed in quotation marks. The bacterial strains examined are closely related to Streptomyces somaliensis .