This article covers the province of the Philippines. For further meanings, see Iloilo (disambiguation) . 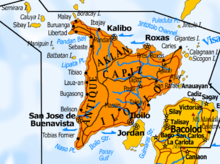 The province is said to be the cradle of Malay civilization in the Philippine archipelago. The arrival of the first Malay settlers from Borneo is said to have taken place here around 1212. Historical finds on the banks of the Siwaragan River in what is now the San Joaquin Valley indicate this. The original name of Iloilo Irong-Irong comes from the nose -shaped land area of ​​the province.

Around 1566, the Spanish conqueror Miguel Lopez de Legaspi founded the first Spanish settlement in the province in what is now the suburb of Oton . With the economic boom of the port facility of the provincial capital Iloilo City , the province experienced rapid development in the 19th century, with the opening of the first golf course in Southeast Asia in 1855 in Sta. Barbara , the international port and the first railway line outside of Luzon. Agricultural products and local textiles were exported from here all over the world and thus the immigration of European and Chinese traders to the province was encouraged. In 1933 Iloilo-Negros Air Express Co. was founded , which is considered to be Asia's first private airline.

On December 25, 1899, about a year after the Philippine Revolution in Luzon , Iloilo and with it all of Panay , Romblon and Guimaras officially became independent from Spain . Iloilo has been an independent province since March 10, 1917.

Iloilo's economy is mainly dominated by agriculture. The province is a traditional producer of rice , wheat , sea shells , sugar , jusi textiles and mangoes . Almost 8% of all agricultural products in the Philippines are produced here. In recent years, tourism in the province has increased, which has also boosted the service sector. Iloilo City's merchant fleet has a long trading tradition and history, as Iloilo was once one of the most prosperous provinces in the country.

Hiligaynon is the most widely spoken language. Kinaray-a , Tagalog, and English are also widely understood.

In the Iloilo region, these places are worth visiting:

The province of Iloilo is politically divided into 42 independently administered municipalities and two cities . The entire province is divided into six congressional districts.