Negros Oriental (in German: East Negros) is a province of the Philippines and comprises the southeastern part of the island of Negros .

The province belongs to the Central Visayas region (2015 to 2017 to the Negros Island Region ). The capital is Dumaguete City , located in the southeast of the province. Negros Oriental has 1,354,995 inhabitants (August 1, 2015 census) who live in 6 Component Citys and 20 municipalities. The province covers an area of ​​5,385.5 km², which also includes the island of Apo off the south coast.

The topography of the province is largely determined by low mountain ranges, which are separated by deeply cut valleys and push up to the coastline. The highest peak is the active volcano Kanlaon which the National Park Mount Kanlaon Natural Park is located. It reaches a height of 2,465 meters above sea level and at the same time marks the northernmost point of the province, on the border with the neighboring province of Negros Occidental. The second highest mountain complex is the Cuernos de Negros , in the south of the island, with its highest peak the Magaso, which reaches 1862 meters above sea level. In the southwest, the mountains are joined by the Tablas Plateau, which is covered with a rainforest.

There are a number of rivers, streams, springs and waterfalls in the province. A total of 25 rivers run through the province and 47 springs are fed. Most of the rivers can be found in the south of the province. The water is mostly used for irrigation of the fields and for the daily water needs of the population.

The most famous lakes are the Balinsasayao and Danao Lakes , which are located in the Balinsasayao Twin Lakes Natural Park , on the northeast flank of the Cuernos de Negros Mountains. They are about 41 km from the Sibulan-San Jose Highway. Other lakes are Balanan Lake in Siaton, Yagumyum and Naiilig Lakes in Dauin. The Casaroro waterfall is located in the mountains of the Cuernos des Negros and is the highest waterfall in the Central Visayas .

A total of 33 caves can be found in the province, of which the Odloman cave system with 8,870 meters in length is the second longest cave in the Philippines.

A beach near Dauin

The largest religious community in the province is the Roman Catholic Church , in 2000 it had 893,726 members, this corresponded to 79.16% of the total population. Other Christian denominations are The Philippine Independent Church and the United Church of Christ in the Philippines.

The province was founded on January 1, 1890, with the provincial administration in Dumaguete City. At that time it had 94,782 inhabitants and 17 municipalities. The first governor was Joaquin Tavera.

In the new province, a local court has been established in each municipality and an administrative court has been established in the provincial capital. In 1898 the revolutionary mood spilled over into the province, under the leadership of Don Diego de la Viña the Spanish colonial troops were driven out and the provincial government overthrown. On October 25, the revolutionary provincial government was reorganized under the governor Don Demetrio Larena and confirmed by the President of the First Philippine Republic, General Emilio Aguinaldo .

Not until May 1, 1901 was a civil provincial government reinstated under American colonial rule. On August 28, 1901, the Silliman Institute was founded by David S. Hibbard, and it was later converted into Silliman University . 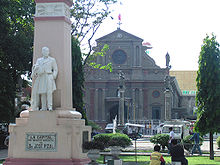