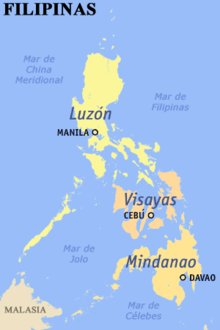 The Visayas as part of the Philippines

The Visayas (in Cebuano and Wáray-Wáray : Kabisay-an , Tagalog similar to Kabisayaan , Spanish Bisayas ) are one of the three island groups that together make up the island nation of the Philippines . The other two groups of islands are Luzon in the north and Mindanao in the south.

The Visayas consist of three regions:

Most of the people in the region belong to the Visaya ethnic group and speak one of the Visayan languages , which include over 30 languages. This includes the largest language with 20 million speakers, Cebuano , which is itself also known as Bisaya or Visayan, Hiligaynon with 7 million and Wáray-Wáray with 3 million speakers. In addition to the Visayas Islands, the language is also spoken in the Bicol region , especially on Masbate , the islands south of Luzon such as Romblon , large parts of Mindanao and the Sulu Archipelago .

The Visayas are politically divided into three regions , which are subdivided into a total of 16 provinces.

Western Visayas consists essentially of the island of Panay and the western half of Negros and covers an area of ​​20,794 km².

Central Visayas includes the main islands of Cebu and Bohol as well as the eastern half of Negros and covers an area of ​​15,886 km².

Eastern Visayas consists mainly of the islands of Leyte and Samar and covers an area of ​​23,251 km².

Islands and archipelagos of the Philippines