This article deals with the province. For the municipality, see Siquijor (Siquijor) . 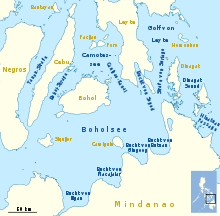 Map with Siquijor in the south-western part of the Boholsee

Siquijor is the third smallest province in the Philippines and the smallest of the island provinces in the Visayas and after Camiguin and Batanes , both in terms of area and population.

Politically, it belongs to the Central Visayas region (Region VII). The headquarters of the provincial government is located in the municipality of the same name, Siquijor .

The Spanish referred to it as Isla del Fuego (Island of Fire) and for many Filipinos it is still a mystical island full of witches and supernatural phenomena. Siquijor is also famous among Filipinos for its healers with miraculous powers.

The island province is located southeast of the large islands of Cebu and Negros and southwest of Bohol in the Mindanao Sea . Finally, the island of Mindanao extends to the south .

According to the census of August 1, 2015, 95,984 people live in the very mountainous island province. The largest towns on the island are Siquijor (capital of the province), Larena and Lazi, which also have ports with connections to other islands. A paved road leads around the island and connects the places. The coastline is about 80 km. The main industries are agriculture and fishing . The many Siquijondos working abroad ensure the island's relative prosperity. The Tourism plays a minor role in Siquijor, although the coral reefs , palm beaches, waterfalls and caves have great tourism potential, as well as historic churches and old houses.

The communities in turn are subdivided into a total of 134 barangays (districts). The province is also assigned to a congress district .

When the Spanish discovered the island, they named it Isla del Fuego (Island of Fire) because they saw a fiery light as they sailed by. It is believed that it was the glow of countless fireflies . According to legend, the island only existed under water for millions of years and rose from the sea with a thunderous roar and lightning. The evidence is drawn from the fossils of snails, mussels and other marine life found in the mountains.

Until September 17, 1971 Siquijor was part of the Negros Oriental Province . Since then, the residents have celebrated their Independence Day ( Araw ng Siquijor ) every year .

There are roughly five climate zones in the Philippines, Siquijor belongs to climate zone 2 (short dry season from March to May, the rainy season from June to February is long but not very intense.)

In general, the weather on Siquijor is very nice from September to mid-May. December and January are cool at night and it rains occasionally. From March to the end of May it is very hot and there is almost no rain. 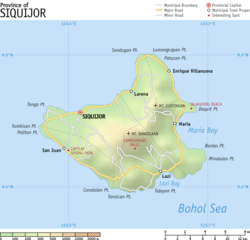 Map of the island of Siquijor

Near the city of Cantabon, the highest mountain in Siquijor is the 557 m high Mount Bandilaan. The palm-fringed Paliton Beach, a few kilometers from San Juan, is one of the most beautiful beaches on the island. In Lazi, opposite the St. Isidore Parish Church, built in 1884, is the oldest and largest convent in the country, the St. Isidore Labradore Convent. This San Isidro Labrador church complex has been on the Philippines' list of proposals for inclusion on the UNESCO World Heritage List since 2006 . And a few kilometers inland from Lazi lies the Po-ol waterfall, a very beautiful waterfall with a natural pool, in a beautiful landscape.

In recent years, more and more divers and snorkelers have discovered the underwater world of Siquijor for themselves. Most dive sites can be reached from the beach and offer the underwater flora and fauna typical of the Philippines. Gently sloping coral reefs and abundantly overgrown steep walls characterize the scenery around Siquijor. Most international resorts can be found in the south of the island, while in the northern part you will find mostly functional accommodations.

Siquijor is also often offered as a day trip with two to three dives from neighboring islands. The dive sites visited on these day trips are mostly in the area of ​​Tambisan and Paliton. Those who move into a resort on the island have the opportunity to explore the dive sites around Siquijor with a rented vehicle. Be careful when entering from the beach, as the seagrass meadows in shallow waters are often populated by sea urchins and crabs.

Islands and archipelagos in the Central Visayas region