Mindanao is the second largest island in the Philippines and its southernmost group of islands .

The island or the archipelago of Mindanao lies between the Sulu Sea in the west and the Philippine Sea in the east. Together with the two more northerly island groups Visayas and Luzon , Mindanao forms the island state of the Philippines.

With an area of ​​94,630 km², Mindanao is the second largest island in the Philippines after Luzon . Together these two main islands have about 2/3 of the total land area of ​​the Philippines with over 70% of the population. Mindanao alone has a population of around 22 million.

The largest city in Mindanao is Davao City . The highest elevations on the island and in the entire state are the Apo , located south of Davao City, at 2954 m and the 2938 m high Dulang-dulang . Mount Sumagaya is also located on Mindanao . 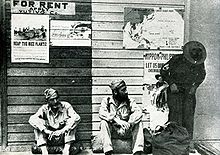 US soldiers captured by Japan

In 1976, 600-year-old remains of large ocean -going boats called Balangay were found in Butuan City, Libertad district . After further archaeological excavations of Butuan , the outlines of a pre-colonial port complex , skeletons and valuable funerary objects were also discovered, which seem to confirm the assumption that Butuan is the oldest fortified settlement in the Philippines.

The Islam came in the 14th century in Mindanao and spread in the southern part of the island. The Sultanate of Sulu was founded in 1450 and existed until the early 20th century. The Sultanate of Maguindanao had its heyday around 1690.

Overall, the history of Mindanao, like that of the entire archipelago of the Philippines, is changeable and shaped by conflicts and colonization. After centuries of Spanish rule, the island fell to the United States. Mindanao itself was comparatively sparsely populated at that time, but the region was economically of great interest due to its natural treasures. In order to gain control over the sultanates of Sulu and Maguindanao, which existed at that time, long conflicts over land rights and mineral resources began; there was de facto expropriation of the local population. In addition, any land allocation by the ruling sultans was declared null and void by the central government in Manila.

Approx. 72% of the residents of Mindanao are Christians , including 60.9% Catholic, 2.16% independently Catholic and 5.34% Protestant, approx. 20.44% are Muslim . This means that Mindanao has the largest proportion of Islamic believers nationwide, most of whom live in the south and west of the island.

The tribes that are neither influenced by Christianity nor by Islam are called Lumad , they maintain traditional religions that can be described as animistic . The remaining five percent are attributable to them, to other religions or to those who do not confess.

In Mindanao, the service sector accounts for the largest share of economic output.

As in large parts of the Southeast Asian archipelago , rice is also grown on Mindanao , but its own production does not cover the growing consumption of the population. In addition, wheat , coffee , sugar cane and cotton grown. The fruits mango , coconut , bananas , pineapple and papaya also play an agricultural role, as does the edible marshmallow . Furthermore, there are rubber plantations , okra , camote and the abaca plant, relates a banana from whose fibers " Manila hemp is obtained."

The mineral resources , some of which have not yet been developed, are economically significant ; for example, the Philippines are Asia's main gold producer. In addition to gold , the metals copper , aluminum , nickel , manganese , iron ore , chrome iron ore , silver and cobalt also occur on Mindanao . Non-metallic mineral resources are clay , stones , sand , limestone , salt , gravel , basalt , andesite , quartz , guano , and also opals . 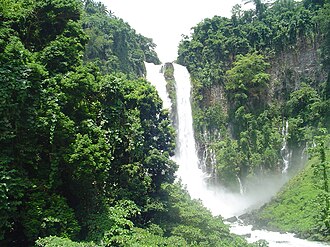 On the large island of Mindanao there are a number of interesting tourist places, e. B. Waterfalls like the Cotabato waterfalls, the Maria Cristina waterfalls (Twin Falls), the Abaga waterfall , Lumakot or the Cathedral waterfalls. Sinipang Bay has many beaches and corals in the Zamboanga del Norte province . There are also famous beaches in other provinces such as B. Apo Beach, Talomo Beach, Mabua Beach, Tandag Beach or Tanbis Beach. Mindanao has a large number of inland lakes that present a variety of different ecosystems. The largest lake is Lanao Lake , to the southwest of it are Dapao Lake , 120 meters deep, and Wood Lake . The second largest inland lake in Mindanao, the Mainit Lake, is located in the northeast of Mindanao . At the foothills of the Ligawasan river landscapes in the southeast of the Central Mindanao Basin lies the third largest inland lake in Mindanao, Lake Buluan . To the south of it lies the Sebu Lake, surrounded by tropical rainforest, in the Daguma Mountains, which are up to 2,083 meters high . East of Lake Sebu is Mindanao's largest crater lake on the summit of Parker Mountain, 1,824 meters high . Other places of interest are Bukagan Hill, Fort Pilar , Macahambus Cave, Aguinaldo Pearl Farm , Atlas Mines, Dole Company, Santos Fish Ponds and Iron Mountain. A four-day ascent of Mount Apo is a challenge for hikers . Also worth seeing is the northern island of Camiguin with its seven volcanoes.

The finds of the archaeological excavation site Butuan City , which has been on the list of proposals of the Philippines for inclusion in the UNESCO World Heritage List, are historically significant . On the east coast of Mindanao are the Britania Islands and Pujada Bay .

National parks and nature reserves in the Caraga region

National parks and nature reserves in the Cotabato region

National parks and nature reserves in the Davao region

National parks and nature reserves in the Northern Mindanao region

National parks and nature reserves in the Zamboanga Peninsula region

Islands and archipelagos of the Philippines

Regions and Provinces of Mindanao