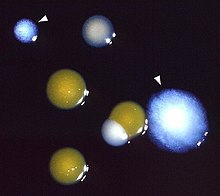 Legionella pneumophila is an obligatory aerobic , gram-negative rod with mostly monopolar flagellation . In the native preparation, mostly short rods are found, while rod bacteria of different sizes (2–20 µm) predominate in culture. Legionella mainly use amino acids as an energy source. Sugars cannot be metabolized into acids. Legionella depend on cysteine and iron (III) ions in the nutrient medium. Therefore, they are usually found in the wild in combination with autotrophic microorganisms (e.g. iron-manganese bacteria) or they are found in amoebas ( e.g. Acanthamoeba , Naegleria ). Amoebas appear to play an important role in the spread of Legionella pneumophila. Legionella do not form urease and nitrase , but are catalase positive. Legionella are sensitive to dehydration. At a temperature of 60 ° C, they survive for about five minutes.

Legionella pneumophila forms biofilms with a density of up to 100,000 cfu / cm 2 . The biofilm protects the bacteria from biocides or harsh environmental conditions.

Legionella pneumophila is found worldwide in soil and water samples. As a source of infection for humans, it can be found in hot water pipes with insufficiently heated water (<60 ° C), air conditioning systems and cooling towers.

The Pontiac fever is an acute, self-limited respiratory illness with cough and colds, which heals spontaneously usually after seven days.

The transmission is usually airborne, mostly by inhaling aerosols containing pathogens from air conditioning systems or water taps. It is estimated that only 10% of infections actually lead to disease. There is no person-to-person transmission.

The incubation period for Legionnaires' disease is two to ten days, but that of Pontiac fever is only one to two days.

Legionnaires' disease is usually treated with macrolides ( e.g. erythromycin ) in combination with rifampicin or a fluoroquinolone . The pathogen detection is notifiable according to § 7 of the Infection Protection Act.

Legionella pneumophila was not discovered until 1976 when an epidemic emerged among participating veterans at a meeting of the American Legion in Philadelphia. 29 of the 182 sick veterans died at the time. It was then that Legionnaires' disease got its name.