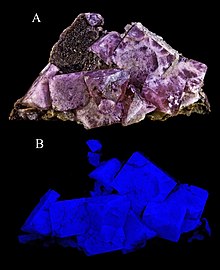 Violet fluorite twin crystals (above) under short-wave UV light (below)

In contrast to phosphorescence , permissible transitions between two electronic states occur with fluorescence . The excited states therefore have a short lifespan and the fluorescence decays after a short time.

The term fluorescence (originally "fluorescence") was introduced in 1852 by George Gabriel Stokes . The word is derived from the sometimes fluorescent mineral fluorite (fluorspar, calcium fluoride, CaF 2 ).

Both fluorescence and phosphorescence are forms of luminescence (cold glow) and are photophysical processes .

However, fluorescence is characterized by the fact that it ends quickly (usually within a millionth of a second) after the end of the irradiation. With phosphorescence, on the other hand, there is an afterglow that can last from fractions of a second to hours.

If the fluorophore is optically excited, i.e. by the absorption of a photon , and then deactivated with the emission of light, this is called photoluminescence .

The emitted fluorescent light is usually shifted into the long-wave range of the light spectrum compared to the excitation light. This effect is called Stokes' rule . The effect is based on the fact that with the electronic excitation, higher oscillation states of the excited state are occupied first, which then release their energy through oscillation relaxation. Likewise, during emission (from the vibrational ground state of the excited state), higher vibrational states of the ground state are often occupied first. In general, therefore, more energy is expended for excitation (shorter wavelength) than is emitted during emission (longer wavelength). The law of conservation of energy is not violated because the differential energy was given off to the environment (vibration relaxation). In the borderline case, of course, excitation and emission can occur between the basic oscillation states of the excited and basic state. In this case, excitation and emission occur with the same wavelength and one speaks of resonance fluorescence .

In an alternative, non-radiating process, the excited state can change its multiplicity to the usually energetically lower-lying triplet state (exception: e.g. molecular oxygen ) through a so-called intersystem crossing . From here, in turn, various deactivation channels are open, with the radiating, i.e. H. Light-emitting, known as phosphorescence .

other dyes: in the fluorescent dye category

High-energy cosmic radiation triggers particle cascades, so-called extended air showers, in the earth's atmosphere. The charged particles of these showers excite the nitrogen molecules in the air so that they emit fluorescent light. By measuring this light, conclusions can be drawn about the primary cosmic radiation. Similar phenomena are the polar light , in which the air molecules are primarily excited by the particles of the solar wind , and the radiation from the glowing comet's tail , in which molecules emit light as a result of the interaction with the solar wind.

Minerals , gemstones , fibers and many other materials that are examined in collectibles and antiques have different fluorescence properties when irradiated with short- or long-wave UV light or with X-rays and can thereby be identified.

Fluorescence is also used in paleontology to find and examine numerous fossils. 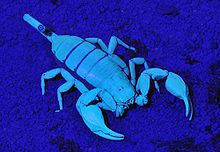 Biofluorescence, fluorescence from organisms, is known in cat sharks . There are current film recordings that show biofluorescence (distributed over the whole body), which can only be detected with special light. Fish, especially small, bottom-bound marine fish and various coral fish from different families ( above all Gobiidae , Tripterygiidae , Labridae and others) have red fluorescent patterns as part of their body color or red fluorescent eyes. This is a trick to convert this into a noticeable red glow in deeper water, where blue-green ambient light dominates. Little is known about the exact mechanisms and functions of this fluorescence. John S. Sparks devoted himself a. a. research into bioluminescence in marine fish.

The cuticle of the scorpion fluoresces when exposed to UV light. Embedded beta-carbolines and 7-hydroxy-4-methyl coumarin are stimulated. This effect is retained even after the animals die. With the help of appropriate lamps, the animals can therefore be easily spotted in the dark.

Some methods and areas of application are listed below:

The term fluorescence spectroscopy summarizes methods that use the fluorescence properties of fluorophores to obtain information about the systems under investigation. There are many natural and synthetic compounds that exhibit fluorescence. The composition of a sample can therefore be determined with the help of spectroscopy.

By absorbing (invisible) ultraviolet and blue light and emitting longer-wave visible light, brightening can be achieved:

As early as the 19th century, there were reports about the fluorescence of esculin or watery extracts from horse chestnut bark irradiated by sunlight . The German chemist Paul Krais (1866–1939) investigated this effect by adding aesculin-containing extracts of horse chestnut to wool and flax, thereby achieving an optical brightening.

So-called black light ( UV light , UV-A) is often used in discos to illuminate fluorescent colors, beverages containing quinine or optical brighteners in clothing. Blackboards that can be written on with fluorescent chalk are also known. They can be illuminated from the outside or from the inside ( floodlight ) through the transparent board material with ultraviolet.

Daylight color already fluoresces through the excitation with the blue component of daylight. Since this is particularly high in bad weather and at dusk, better visibility is achieved. Fluorescent paint is also available in water-soluble form. 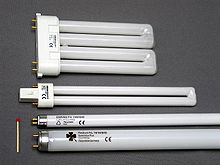 In fluorescent lamps, ultraviolet light, which is generated by gas discharge in the tube filled with mercury vapor , is converted into visible light. In white light emitting diodes (LEDs), fluorescent dyes that are similar to these phosphors convert the monochromatic blue light that a semiconductor crystal produces into polychromatic white light.

Technical fluorophores consist of substances such as the very frequently used zinc sulfide and chemically similar compounds or oxides of the rare earth metals . If these compounds are doped with so-called activators , different colors can be produced. As activators are often di- and trivalent lanthanide - cations used. For example, divalent europium cations produce blue light, while the trivalent europium cations emit red light . Green light is produced, for example, by Cu + and Al 3+ -doped zinc sulfide.

A large spectrum of usable light wavelengths and color temperatures can be realized through a suitable composition (mixture) of the phosphors , whereby the illuminant can be adapted to the respective application. In fluorescent lamps z. B. depending on the luminous gas used, the spectrum of sunlight (cold white) or that of an incandescent lamp mimicked.

Also tritium gas light sources utilize the fluorescence of a phosphor represented by the beta radiation of tritium is stimulated.

What they have in common is the release of electrons through glow emission in a vacuum and their acceleration onto a phosphor layer through an electrical voltage . The shadow cross tube and field emission microscopes used for demonstration purposes , on the other hand, have cold cathodes , and image converter tubes accelerate the electrons generated on a photocathode and produce an image on a small fluorescent screen .

Application in biochemistry and medicine 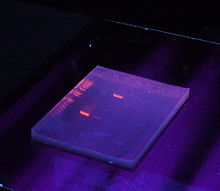 DNA fragments stained with ethidium bromide in an agarose gel

Fluorescent chemical groups can be attached to large biomolecules by means of a fluorescent label, which then serve as a very sensitive marker for this molecule. 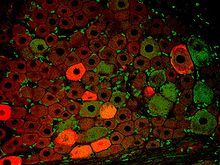 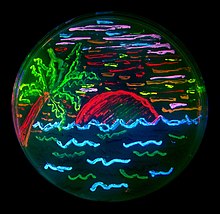 In forensics , the properties of proteins and their fluorescent effect on certain wavelengths of light are also used in order to be able to recognize blood , saliva , urine or sperm . Since these substances are not always visible to the eye in daylight , lights are equipped with special filters to make specific proteins glow depending on the body fluid . For better detection of the fluorescent protein traces, glasses with a broadband filter are used, which mask the disturbing background fluorescence and scattered radiation .

In the fruit industry , mold can be detected under UV light.

The use of fluorescent colors is a stylistic feature in psychedelic art and in contemporary light art .