Stylistic device used in psychedelic art around 1967: the paisley pattern

Psychedelic art, often also called psychedelic art or psychedelia , describes a not clearly defined style of contemporary art that is based on the experimental use of mind-expanding drugs ( psychedelics ) such as LSD , mescaline or psilocybin and tries to use these sensory impressions in visual art , film , music and literatureto reproduce, to describe, to manifest emotionally or to offer the viewer additional stimulation under the influence of drugs . In the combination of acoustic and visual overstimulation , psychedelic art can not only simulate the impression of a drug experience, but also, in the form of a flashback , have a triggering and reinforcing effect and, in the worst case, cause epileptic convulsions or horror trips . Pure psychedelic art often arises in a state of trance .

Many underground artists , designers , painters , writers and musicians , mainly from English-speaking countries, referred to psychedelic experiences in reflection on the countercultural movement of the 1960s , the beat generation and the hippie movement, and used them in words, sounds and images. Psychedelic visual arts represent the counterpart to psychedelic rock music and have a significant influence on graphic design and the creation of posters , record covers and underground comix as well as on underground films , light shows and fashion .

The word psychedelic (originally from Greek ψυχη (psychḗ, “soul”) and Greek δῆλος (dẽlos, “apparently”)) is based on a neologism first formulated around 1956 by the British psychiatrist Humphry Osmond and the writer Aldous Huxley as a word creation for a new one Kind of drug effect on the soul. 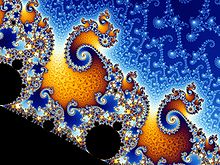 The boundaries between some manifestations of Op Art (e.g. Victor Vasarely or Bridget Riley ) and Pop Art (e.g. Andy Warhol's Exploding Plastic Inevitable ) are fluid or congruent; in some cases there are parallels to magical and fantastic realism . In general, psychedelic works of art are characterized by the following features: 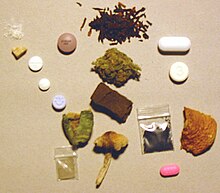 Although the hallucinogenic effects of various naturally or synthetically produced substances were already known at the beginning of the last century, the actual systematic research into psychotropic stimulants began with the development of lysergic acid diethylamide , LSD, by the Swiss chemist Albert Hofmann . Hofmann, who tested the new reagent in his own experiment, reported on "unheard-of colors and shapes that lasted behind closed eyes" and of "kaleidoscopic changing, colorful, fantastic shapes in circles and spirals that open and close again [...]". The mind-altering effects of the new drug were quickly made public and met with increased response , especially through clinical tests carried out by the psychiatrist Oscar Janiger in the USA . Janinger tested the drug on fifty different artists: each test subject was initially asked to paint a picture of a motif of their choice without consuming drugs and then repeat the same subject under the influence of LSD. The images were then compared with one another. The artists were surprised by the increase in their creativity . Psychotropic substances were particularly popular in the beatnik scene; Letters such as Allen Ginsberg , William S. Burroughs or Timothy Leary propagated the positive effect of the “miracle drug” on the human psyche and also drew on the cultural assets and knowledge of indigenous peoples about naturally occurring psychoactive substances such as hallucinogenic mushrooms or the mescaline juice of the peyote cactus back. Drug experiments to increase creativity or to achieve a religious-mythical exaggeration of the spirit were already known in early cultures. In modern times, the first psychedelic approaches can be found in mysticism , symbolism or surrealism ; Well-known writers such as Charles Baudelaire , Arthur Rimbaud and Edgar Allan Poe described experiments with hashish , absinthe and opium .

Psychedelic art and designs in the 1960s

In the course of the flower power movement, the strongest trend in psychedelic art came from San Francisco in the mid-1960s . In Haight-Ashbury , most artists of the hippie scene met; Numerous posters, publications and leaflets were created that either referred to concert events, drug parties or be-ins . Many of the artists also worked with musicians and music groups such as Carlos Santana , Jefferson Airplane , Canned Heat and others. a. together and designed their record covers. The design mostly consisted of floral ornaments. Well-known American artists were Rick Griffin , Victor Moscoso , Stanley Mouse & Alton Kelley and Wes Wilson .

Psychedelia also spread quickly in Europe: Pink Floyd had their concept albums designed by the experimental London design group Hipgnosis , which soon developed their own surreal design for the band. The also conceptual Beatles album Sgt. Pepper's Lonely Hearts Club Band is full of hidden allusions to consciousness expansion and psychedelic drug use. a. Images of protagonists such as Burroughs, Huxley or the mystic and occultist Aleister Crowley . The animated film " Yellow Submarine " linked to it, under the art direction of the German graphic artist Heinz Edelmann, combines Pop Art with psychedelia in bright colors.

At the beginning of the 1970s a turning point came: with the end of the Vietnam War , the associated decline of flower power and hippy on the one hand, and the " swinging sixties " that had meanwhile come over and their increasing commercialization on the other, interest in the colorful, flower-rich decorative drug art soon disappeared.

In the mid-1960s, numerous artists in German-speaking countries also experimented with psychogenic drugs: the Austrian painter Arnulf Rainer painted 1964–65 under the influence of LSD, psilocybin and alcohol.

The Munich doctor and art publisher Richard P. Hartmann administered LSD to visual artists at the Max Planck Institute in Munich between 1968 and 1970 in order, as he wrote, to get “valuable insights into the painting process”. Thirty visual artists from the German-speaking area took part in the series of experiments. The theoretical background of the test series, in which Bernhard Jäger , Karl Otto Götz , Heinz Trökes and WP Eberhard Eggers took part, was documented in detail by Hartmann.

The German painter Mati Klarwein , traded under the label "psychedelic artist" , whose picture Annonciation from 1962 was used for the famous album Abraxas by Carlos Santana , denied having ever painted under the influence of drugs.

In connection with rock music, the light show developed as the latest form of psychedelic art from the mid-1960s . Pink Floyd was one of the first to use complex colored spotlights at their live concerts. The forerunners of today's discos emerged in the underground clubs of the New York artist and trendy district of Greenwich Village : slide, film or daylight projectors , the lenses of which were partly treated with an emulsion of colorful oil films , threw them through them , following the principle of a lava lamp Warmth moves - colorful, constantly changing bubbles and bubbling drops to the rhythm of the music on the dancing audience; This was combined with films that ran on endless loops at different speeds. Everything was reinforced by reflective mirror balls, stroboscopes or pulsating light tubes . The walls of these light shows were mostly painted with fluorescent colors that glowed brightly with the use of black light. Andy Warhol picked up on this trend for the Eastside and used the idea first for his own party events in the legendary "Silver Factory" and later as a light show for the live performances of the rock band he sponsored The Velvet Underground and the singer Nico . Warhol called these happenings Exploding Plastic Inevitable . On the West Coast of California , the Brotherhood of Light were primarily responsible for many light shows from psychedelic rock concerts and the like. a. by The Jimi Hendrix Experience , Led Zeppelin or Grateful Dead . See also: psychedelic music visualization

Psychedelic publications of the counterculture with socially critical, political or sexually pornographic statements were found primarily in a new genre of comics : the underground comix. The most important representatives include Robert Crumb , who had great success with the series " Fritz the Cat " for Zap Comix (later filmed by Ralph Bakshi ), as well as Gilbert Shelton , Art Spiegelman , Robert Williams and S. Clay Wilson . Most of the time the comix was about drug procurement and consumption and all kinds of sex, drugs and rock 'n' roll . In a comic, Crumb drew the LSD guru Timothy Leary himself as a cartoon character. 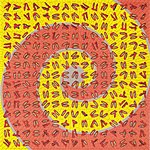 Creative potential soon developed in the design of the LSD trips themselves, the so-called “tickets”. While the drug was initially applied to simple unprinted scraps of blotting paper or sugar cubes, a more decorative and professional type of design was soon found, whereby the LSD was simply applied or "printed" to perforated stamp sheets. On the one hand, the amount, strength and commercial value of the trips could be better calculated, on the other hand, the area offered a lot of space for the design of the so-called LSD blotter (English blotting paper), the LSD-coated, mosaic-like square cells . A sheet Blotterpaper usually consists of perforated rows of squares 15 ( squares ) with 4 tickets . In the course of time, simple drug kitchens became more and more complex LSD printing companies that finally worked with four-color printing and flavored gumming . Meanwhile, numerous poster shops offer drug-free "Blotter Art" as wall decorations. Psychedelic subjects can also be found in batik (tie-dye) or on quilts . The motifs range from kitschy colorful animal and science fiction fantasy figures with elements of Far Eastern or Indian mysticism to complicated graphic patterns, which in turn, whether the square shape, make use of the mathematical framework of fractals.

Psychedelic art in the digital age

The first simple fractal animations were still generated in analog form using video feedback on the television screen. The increasing computerization with constantly improved and inexpensive graphics software, however, soon allowed a broad audience to create their own digital psychedelic visions and fantastic dream worlds. Fractals generated quickly on the computer found their way into screen savers and mixed with real images; Morphing and rendering software and other digital image processing programs suddenly offered unlimited freedom to make the unreal real . The phrase “Turn on, Tune in, Drop out!” Propagated by the LSD Pope Timothy Leary now got a new modern meaning, as everyone could free himself from the constraints of his earthly shell in the form of avatars in order to create a new cosmic consciousness in the to achieve your own virtual dream world, cyberspace . In his later years Leary himself dealt with the new digital world, spoke of the “New LSD” and said that the computer allows “to manipulate one's own mind, to activate brain waves - just like LSD does, only better ”. The cross-gender fusion, dissolution and rebirth, as it was striven for in the hippie era, and the attainment of a psychedelic nirvana now took place digitally beyond real life and founded a new counterculture: the net culture and thus net art .

Parallel to the further development of hallucinogenic substances and the creation of new drugs such as MDMA (Ecstasy) or GHB (Liquid Ecstasy), new subcultural trends soon emerged , such as the rave and techno / trance scene , which in turn claimed their own forms of expression.