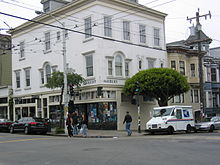 Haight-Ashbury is a district of San Francisco named after the intersection of Haight Street and Ashbury Street . The area became famous in the 1960s through the beatnik and hippie movement. Janis Joplin as well as the groups Grateful Dead and Jefferson Airplane should be mentioned as famous musicians who lived in Haight-Ashbury and who played a decisive role in shaping the local music scene . In addition, the district is mentioned in song lyrics from this time. So devoted Jimi Hendrix the red house on Haight Street 1524a, lived in his then girlfriend, the song Red House. Today this building houses a tobacco and souvenir shop. Haight-Ashbury has long been a magnet for an alternative counterculture .

The neighborhood is portrayed in the resulting documentary Following Sean , released in 2005 and using footage since 1969.