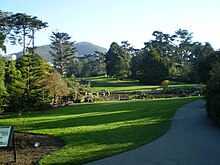 Aerial view of the park 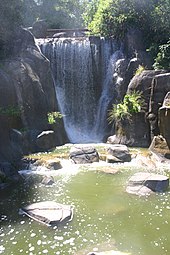 San Francisco 's Golden Gate Park is one of the largest inner-city parks in the world. At 4.1 square kilometers (five kilometers long and 800 meters wide), it is larger than New York 's Central Park . Stretching east from the Pacific Ocean, the park is located west of the city amidst sprawling residential areas, about four miles from downtown.

The rectangular city park was designed by William Hammond Hall in the 1860s and built in the 1870s on land thought to be uninhabitable. A natural scenery was modeled by means of complex landscaping installations such as artificial watercourses, a waterfall and lakes, the largest of which is Lake Stow. A Dutch-style windmill was built in 1902 to supply the water.

The park is home to several of the city's attractions, such as the MH de Young Memorial Museum or the Conservatory of Flowers, a Victorian-style greenhouse. As other attractions, the park is home to the Japanese Tea Garden, the San Francisco Botanical Garden , and the California Academy of Sciences . Makoto Hagiwara, a Japanese gardener who was the official steward of the tea garden from 1895 to 1925, is sometimes credited with inventing the world-renowned fortune cookie .

There is a copy of the Golden Gate Bridge in the park . However, the famous San Francisco landmark is located several kilometers north of Golden Gate Park.