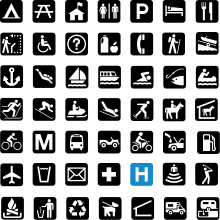 Graphic design is an activity to visually represent language, thoughts and larger conceptual contexts by means of typography , images, colors and materials or to make them visually conveyable.

William Addison Dwiggins (* 1880, † 1956) is said to have coined the term graphic design in America in 1922 , which has been used in the German-speaking countries since the end of the 20th century in the spelling of graphic design and graphic design . Previously, the job described was part of the work of traditionally graphic professionals such as printers , typographers or typesetters . Already before on the creative part concentrating German-language graphic was up "in the late 1980s, commercial artist / in called" or "commercial artist / in."

The development of graphic design did not take place exclusively in parallel with the industrial revolution . For example, the ( poster ) art emanating from Toulouse-Lautrec is one of them. This was again strongly influenced by social and political commitment after the student revolt in France in 1968. In the meantime, graphic design is relatively tightly linked to the customs of modern societies. The focus is on commercial advertising and public communication .

The non-protected job title graphic designer is a specification of the term designer . The term graphic designer is being replaced more by communication designer and is different from industrial , fashion , photo and web designer . A diploma degree - e.g. B. Diplom -Designer / -in or Dipl.-Des. - may only lead to whom this academic degree has been awarded after successfully completing a university degree. BA and MA degrees have been available since the Bologna reform.

The training to become a graphic designer or communication designer is a state-recognized course. It can be studied as a bachelor's or master's degree in three-year full-time lessons at vocational colleges (or vocational schools) or universities of design. There are around 40 universities that offer training to become a communication designer in Germany. In order to be accepted into a school, you have to submit a portfolio with design work to state and private schools and pass an entrance exam.

In addition to classic print media such as magazines , books , posters , maps and brochures , electronic media with interactive properties such as websites or mobile apps have increasingly been special fields of application for media designers, another group of graphic design , since the late 1980s .

For some years now, classic graphic design has no longer been limited to creating and using graphic shapes. That is why the term communication design is increasingly being adopted as a generic term which, in addition to visual communication, also includes verbal and audiovisual communication.

In advertising agencies , the graphic designer is usually responsible for the graphic implementation of concepts developed by the art director or creative director .

Wikibooks: The application to study design and art  - learning and teaching materials