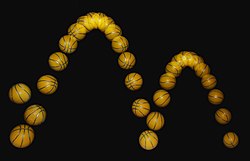 A bouncing basketball viewed under a strobe light.

A stroboscope ( ancient Greek στρόβιλος stróbilos , German 'vortex' and σκοπεῖν skopeĩn 'look at, observe') is a flash device that emits flashes of light at very regular intervals, making movements appear choppy as a sequence of still images in a dark environment.

A similar effect can be achieved with a stroboscopic disc (rotating circular sector screen, see also chopper disc ) if it covers the light source or the object to be viewed.

The stroboscope is due to the discovery of the stroboscopic effect . This effect causes an optical illusion for humans, which is commonly attributed to the afterimage effect on the human retina.

Originally the stroboscope was a device invented by Simon Ritter von Stampfer in 1832 , which used the stroboscopic effect to animate images. He himself referred to it as “stroboscopic disks”, with which he was ultimately able to establish the term “stroboscope” in science. The device was known to the general public as "magic disks" or " wheel of life ". It is based on the synchronized momentary observation of a continuously moving image sequence.

The same terms for the (flash) stroboscope, those magic disks or the stroboscope disks used in optical measurement technology ( chopper disks , rotating circular sector disks) are justified by the fact that it is irrelevant for perception, such as the extraction of a momentary image from a continuous movement he follows:

Stroboscopes and stroboscopic discs are synchronized with the (periodic) process or not synchronized / used for non-periodic processes.

The synchronization with periodic processes allows the analysis with high time resolution and the determination of a phase shift.

The flash light stroboscope emits flashes of light at very regular intervals. If the environment is dark enough, the eye will adjust to the brightness generated by the stroboscope and therefore only see images if such a flash illuminates the scene. It creates seemingly choppy movements that consist of a sequence of images. In a synchronized to a periodic movement of the object flash sequence occurs a stationary image - the frames are one above the other.

If the frequency of the flash sequence deviates from that of the observed periodic process (rotation or oscillation) by a small difference, the process can be observed in all its phases, slowed down to this difference frequency.

When using the stroboscope to measure the speed , a mark or a regular pattern may have to be attached to the object being observed. If that moves in the time between two flashes by exactly one grid width or an integral multiple thereof, then the same pattern can always be observed in the light, which then seems to stand still. If both the flash interval and the grid width are known, the speed can be calculated from the grid points or lines passing by per interval. Ambiguities are possible here and also in the speed measurement based on it. These can largely be identified and eliminated by using a sequence of two-color flashes of light based on prime number ratios.

When determining the distance of a mark / object with multiple images (see picture of the ball above), however, no ambiguity is possible and the speed can be calculated directly from the known stroboscope frequency and the real geometric distance between the individual images.

Ordinary flash strobes produce flash durations on the order of less than a millisecond. Special devices can generate light pulses down to a few tens of nanoseconds. Stroboscopes used for entertainment purposes usually do not have a synchronization input, but can sometimes be influenced by signals or a rough setting of the repetition frequency. Stroboscopes for measuring purposes can be triggered synchronously with electrical signals and / or generate a preselectable, exact repetition frequency.

Stroboscopic disks (choppers) often have a synchronous output at which an electrical signal is emitted with every rotation at the same angle.

To adjust the speed of a turntable, a line pattern attached to the turntable is illuminated with a glow lamp or a light-emitting diode which, for example, emits light that is modulated synchronously with the very stable mains frequency . As a result, deviations in speed are perceived as a slow movement of the line pattern. This means that the turntable can be used to watch for a run-in or run-out and to achieve the correct playback speed by readjusting the line pattern until it appears to have come to a standstill.

In some people, including those who have never had an epileptic fit , strobe lights and the like can trigger epileptic attacks.

Light flash stroboscopes use either xenon flash lamps or light emitting diodes as the light source. Flash lamps have a limited service life of, for example, 10 8 flashes, an electrical flash energy of around 1 joule and repetition frequencies of seldom more than 1 kHz. The flash duration of such professional optical measuring technology devices is, for example, 6 microseconds.

The xenon flash lamp is operated on a constantly recharged capacitor of a few microfarads / a few 100 volts, which provides the flash energy; triggering takes place when the lamp is ignited by means of a high-voltage pulse (around 10 kilovolts). The ignition pulse is generated with a small ignition coil and a thyristor , which in turn is fed from a small capacitor.

Stroboscopes with light-emitting diodes can generate much faster flash sequences - with a shorter flash duration, but only much less flash energy.

Laser diodes or diode lasers can be used for stroboscopic illumination with infrared for observation with CCD cameras . They generate high radiation powers (1 kilowatt) with high efficiency (50%) with pulse lengths down to 1 µs or less.