A modulator is an optical component used to impart defined characteristics to light. This can be, for example, a temporal or spatial amplitude or phase variation.

Modulators are used in optical spectrometers to impart a characteristic to the measurement light so that it can be better separated from the ambient light after it has passed through the spectrometer. The ambient light normally means a certain proportion of constant light plus a proportion from the room lighting that is modulated with the 50 Hz (or 60 Hz) of the power grid and thus with 100 Hz (or 120 Hz) in terms of intensity. The latter influence can easily be coupled into the receiver signal by electrical means and in this way can also be eliminated. However, disturbing pure constant light can also be eliminated by evaluating the alternating voltage of the sensor signal. For example, lock-in amplifiers help to amplify only the signal component with the frequency of the modulation and to filter out contributions from constant light or with other frequencies.

Further applications can be found in laser material processing or laser distance measurement .

When it comes to communications technology applications , modulators are used to modulate an information or data signal onto a carrier light beam - analog or digital. The modulated light is typically passed through a fiber optic cable to the receiver. 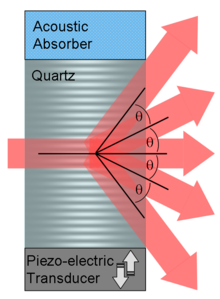 The following optical modulators are common:

In optics, a chopper is (dt. Pulse shaper ) usually a rotating mirror shutter for intensity modulation. It modulates the light in its intensity in a square between 0% and 100%. Similar modulations can be achieved by rotating mirrors, corner mirrors or prisms.

In contrast to other types of modulation, piezo modulation does not affect the measuring light, but rather the sample is mounted on a piezo crystal and mechanically stretched and compressed, whereby the direction of the mechanical tension can be adjusted in several orientations on a monocrystalline sample. This modulates the degree of (already existing) birefringence and thus the reflection / transmission behavior of the sample and thus also the measurement signal. The mechanical stress on the sample by the piezo modulator is applied exactly parallel or perpendicular to the optical axis of the material. This method is mainly used for measurements where the birefringence is only caused by an external magnetic field, i.e. in magneto-optics .

Piezo modulation, like polarization modulation in some cases, provides sinusoidal instead of rectangular modulations, which of course must be taken into account when evaluating the receiver signal.

Laser beam modulators are used both in the transmission of messages and for research and material processing purposes. The modulation can (so-called. Within the laser resonator Q-switch (English q-switch )) or outside in the laser beam take place.

Diode lasers (communications technology, printing technology, CD burners) usually do not have a separate modulator, but are modulated by modulating the operating current.

There are also electro-optical modulators in liquid crystal screens (LCD): they rotate the plane of polarization of the light from the backlight and work together with polarization filters .

In many applications, a modulatable light source is used instead of an optical modulator. Any light source whose intensity can be changed with the aid of the operating current without changing its spectrum is suitable for performing an amplitude modulation . In practice, this process is best done with light emitting diodes and laser diodes , because they allow high modulation frequencies.