Birefringence on a calcite crystal:
ordinary and extraordinary rays are visible through red fluorescence in the crystal

The double refraction or birefringence is the ability of optically anisotropic media , a light beam into two mutually perpendicular polarized to separate sub-beams (ordinary and extraordinary ray). The cause of this effect lies in the different refractive index  ( n o and  n ao ) depending on the direction of propagation and the polarization of the light.

A prominent example of such a material is calcite (also called calcite or double spar), on which the birefringence was discovered by Erasmus Bartholin in 1669 .

Optically isotropic materials (e.g. in the cubic crystal system ) can also become birefringent due to external influences. Such influences are e.g. B.

Most liquid crystals are spontaneously birefringent.

Closely related or connected to birefringence is dichroism , in which colors are absorbed in a polarization-dependent manner. 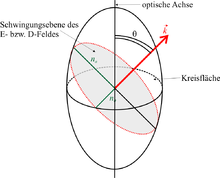 Birefringence occurs in optically anisotropic crystals . These have a different index of refraction for different polarization and direction of the incident light.

The corresponding index ellipsoid can be:

The optical axes of a birefringent crystal should not be confused with the optical axis of a system of lenses and mirrors.

Construction of the ordinary (left) and the extraordinary (right) ray according to Huygens in a uniaxial crystal. In the left case the light is polarized perpendicular to the plane of the drawing, in the right case parallel to it. The propagation velocities are defined relative to the optical axis, not relative to the polarization.

The wave fronts for the ordinary and the extraordinary ray propagate at different speeds and , from this the associated refractive indices follow:

with the speed of light  c in a vacuum .

The difference in the refractive indices ( ) is a measure of the birefringence. The sign is called the optical character or optical orientation . For calcite is . Calcite is therefore an optically negative uniaxial crystal, i. H. in it the extraordinary ray moves faster than the ordinary one:

Accordingly, in an optically positive uniaxial crystal, the extraordinary ray moves more slowly than the ordinary one: 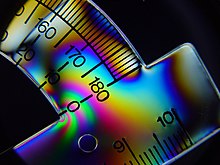 The property of optically active substances to show a different refractive index for left and right circularly polarized light is called circular birefringence .

In order to calculate the rotation of a linearly polarized beam due to the circular birefringence in a material, it can be described as a coherent superposition of a left-hand and a right-hand component with the same intensity. The two parts move through the material at different phase velocities (the greater phase velocity corresponds to the smaller refractive index). After the material has passed through, the superposition of the two parts again results in a linearly polarized beam. The phase difference  Δφ of the two components after the material has passed through is shown in a rotation of the polarization plane of vibration by the angle Δφ / 2 with respect to the vibration plane before the material has passed through. With quartz, this angle is ± 21.7 ° / mm of material thickness (±, since quartz occurs both clockwise and counter-clockwise).

The cause of the circular birefringence in quartz is its " helical " crystal structure. But not only crystalline materials with a "helical" structure show a rotation ability of the polarization plane, liquids also have this property, e.g. B. Turpentine . The reason for this also lies in their molecular structure, which is called chirality . Furthermore, a circular birefringence can be induced by a magnetic field, see Faraday effect , e.g. B. lead silicate glass.

There are also comparable effects for the absorption behavior of materials, see circular dichroism .

The tables contain the refractive indices of common uniaxial or biaxial systems at the wavelength of orange-red light:

In the case of optical images , birefringent materials can be used as an optical low-pass filter , for example to reduce the aliasing effect that occurs in connection with Bayer sensors .

Birefringence can also occur as a disturbing effect, e.g. B. in injection compression molding of compact discs . The birefringence is caused here by mechanical stresses within the polycarbonate layer, for example by thermal stress or shear stress on the material.

Various theories suggest that birefringence with sunstones was a historical tool for determining the position of the sun and navigating ships when the sky was overcast . 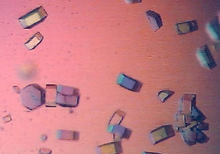 When the sample is rotated between crossed polarization filters, the brightness or the color of the birefringent object changes, while optically isotropic materials show no changes in the image.

The detection of a birefringent substance can therefore, for. B. also take place in a polarizing microscope .

It is also possible to identify birefringent materials using the immersion method.