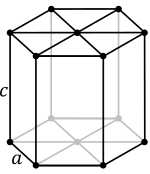 The hexagonal axis system in crystallography

As in all whirling crystal systems , the axis of rotation with the highest number is placed in the direction of the c-lattice axis. The plane perpendicular to this is described by two axes a 1 and a 2 of equal length , which are at an angle of 120 ° to one another. This results in the following metric: and The unit cell formed by these basis vectors is shown in Figure 1. It has a volume of

The hexagonal axis system in other disciplines

In mineralogy and especially in metallurgy, it is common to use an additional axis a 3 in the (a 1 , a 2 ) plane (see Fig. 3). This has the same length as a 1 and is at an angle of 120 ° to both a 1 and a 2 . The Miller indices are extended by the index i to form so-called Miller-Bravais indices and then have four components: (h, k, i, l). The index i is redundant because: i = - (h + k). Similarly, in metallurgy, directions are also represented by four-part symbols [uvtw], the Weber indices .

The hexagonal cell is often represented in the literature as a hexagonal prism (see Fig. 2). Since this prism is not a parallelepiped , it is not a unit cell. This prism consists of three hexagonal unit cells.

Figure 3 shows the a 1 -a 2 plane of the hexagonal axis system. In detail:

When considering possible centerings, there is a special feature in this axis system. If you add additional grid points in such a way that the full symmetry of the hexagonal grid is retained, then only point grids result that can also be described by a primitive hexagonal grid (with other grid constants).

However, if you add additional grid points at the points and or and , a new grid results, which no longer has the full symmetry of the hexagonal point grid, but the lower symmetry .

This lattice system can also be described with a primitive unit cell . The following applies to the metric of this cell: and . This unit cell has the shape of a rhombohedron , a cube that is distorted along its spatial diagonal. This unit cell is primitive, but not conventional , since the threefold axis is not in the direction of a grid vector, but in the direction of the space diagonal. This grid system is called rhombohedral, has holoedry and is referred to as an R grid regardless of the arrangement (hexagonal or rhombohedral axes).

Use in the trigonal and hexagonal crystal system

The rhombohedron is a cube distorted in the direction of the space diagonals. It is therefore appropriate to use this list in cases in which a cubic and a rhombohedral structure are compared with one another, since the axis system does not have to be changed.

Since the hexagonal axis system is not an orthogonal system, its metric is more complicated. One of the approaches to deal with this is the description using an orthorhombic grid system, the so-called orthohexagonal system. It is an orthorhombic C-centered cell. The base of this system is a rectangle with the aspect ratio b: a of . It is shown in green in Figure 3. The third axis corresponds to the hexagonal c-axis.

The advantage of this list is the simpler metric, the disadvantage is the loss of an explicit three or six-fold axis.

In the description of the upper or subgroups in the International Tables a three-times magnified hexagonal cell, the so-called H-cell is used.

It is also possible to describe the hexagonal grid with six centered rhombohedral cells. These cells are called D cells. They are not used to describe structures.

The division of the crystals into crystal systems was originally based on the morphology. In the trigonal or hexagonal system, all those crystals were combined whose crystal shape suggests the presence of a three or six-fold axis of rotation. However, since the six-fold rotational inversion axis produces a threefold crystal form, the point groups (trigonal-dipyramidal) and (ditrigonal-dipyramidal) were initially counted as part of the trigonal crystal system, as can still be seen from the names for the crystal forms today.

Point groups in the hexagonal crystal system and their physical properties

To describe the hexagonal crystal classes in Hermann-Mauguin symbology , the symmetry operations are given in relation to given directions in the lattice system.

Characteristic for all space groups of the hexagonal crystal system is the 6 (or 6 ) in the 1st position of the space group symbol.

The hexagonal closest packing of spheres

The hexagonal close packing of spheres (hdp, hcp ) is one of the two possibilities of close packing of spheres . It can be described as follows: Its basic cell is a six-sided prism , the 12 corners of which are each occupied by a sphere of the same size. The ball diameter is equal to the edge length (the 6 balls per ball are in contact). In the middle of each of the 6 balls there is a 7th ball of the same diameter. The height of the prism is such that 3 more balls of the same diameter fit between the 7 upper and 7 lower balls. These 3 balls touch each other and hit one gap each within the 7 upper and 7 lower balls. The aspect ratio of the hexagonal cell (s. Figure 2) is: .

The stacking sequence of its three hexagonal spherical layers is written ABA.

A unit cell with hexagonal close packing (hdp) consists of two diamond-shaped bases. The atoms are located within the unit cell on the crystallographic positions 1/3, 2/3, 1/4 and 2/3, 1/3, 3/4 (a symmetry center of the structure is then, according to convention, 0, 0, 0).

Many metals crystallize in a hexagonal close packing of spheres: Be, Mg, Sc, Ti, Co, Zn, Y, Zr, Tc, Ru, Cd, Lu, Hf, Re, Os, Tl and some lanthanoids . Magnesium is the most prominent representative , which is why this structure type is also called the magnesium type.