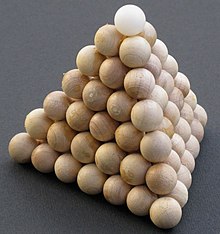 Pyramid of densely packed spheres;
each horizontal layer is covered as in
1. description;
the layers follow one another according to the ABAB scheme ... (see below)

Pyramid of densely packed cannonballs ;
each horizontal layer is covered as in
2nd description;
the side walls, viewed as layers, follow one another into the interior of the pyramid according to the ABCABC ... scheme (see below)

The closest packing of spheres is the mutual arrangement of spheres of equal size that takes up the smallest space. The empty space between the densely packed spheres only takes up about 26% of the total space, or the packing density is about 74% :

This arrangement can be described in two ways:
It consists of flat layers of touching spheres,

It is agreed that every ball is touched by 12 others ( kiss number = 12). The first (1st) of the two descriptions is the preferred one. The layer contained therein is called a hexagonal (regularly hexagonal) sphere layer , which in the second case is called a tetragonal (square) sphere layer .

The problem goes back to Sir Walter Raleigh , who asked how cannonballs could most closely be stacked in a ship. 1611 expressed Johannes Kepler the presumption that densest spherical packing in face-centered cubic and hexagonal vorlägen crystal systems. Carl Friedrich Gauß proved this assumption to be correct in 1831. In 1998, the American mathematician put Thomas Hales one computer evidence before that these two arrangements are the only ones with closest packing. Like all computer evidence, this work is not yet recognized in parts of the mathematical professional world.

The closest packing of spheres is understood to mean the packing density in an arrangement of an infinite number of spheres. Finally, many balls show their value even if the outer balls only z. T. be counted. The boundary of the considered gross area leads through the centers of these spheres. In the theory of finite packing of spheres , the gross space is larger. The shell that forms it (e.g. a sack for spherical goods) contains the outer spheres in their entirety.

gray: bottom layer ( A layer)
yellow and red: B layer or C layer (here as the second layer; generally in any order as the second or third layer)

In a hexagonal layer of spheres, each sphere is surrounded not only by 6 spheres but also by 6 gaps. A second layer of balls placed on top of a first layer of balls A (see adjacent figure) requires 3 of the 6 gaps to "snap in". There are two options: Snap into the white or black marked gaps in layer A. In one case (white gaps) the applied layer is used as a B layer, in the other case (black gaps) as a C layer (Designations A, B and C are common in crystallography ). The third layer of spheres has two options for locking into the second: If it locks in such a way that it lies over the bottom layer, it is called an A layer like this . When it uses the second possibility of locking, it takes up a third layer and is known as a C layer.

In principle, the stacking sequence is infinitely varied. Practical significance (crystallography) is almost exclusively only the stacks that are continuously repeated after two or three different layers. They are called shift sequences ABAB ... or ABCABC .... The sequence of layers ABAB ... is the result of the fact that, in principle, only the next but one (third) hexagonal spherical layer can lie flush over the first. The sequence of layers ABCABC ... follows the fact that if the next but one (third) is not in alignment with the first layer, the next but one (fourth) layer must be in alignment with the first. Apart from that, the stacking can be continued in any order; the layers only have to "snap into" each other so that the value of the packing density is ≈ 74.05%.

The pyramid of cannonballs shown above with a rectangular floor plan is a stack of square layers of spheres. In crystallography, square layers are not used, because square layers in which the face-centered cubic unit cell can be seen extend obliquely through a stack of hexagonal spherical layers with the layer sequence ABCA.

These are pure metals that exist in crystal form.

In particular, the lighter lanthanoids and heavier actinides are available in a mixed form under standard conditions (layer sequence ABACABAC ...). This has the same space group as the hcp structure, but with four atoms in the unit cell, namely at (0,0,0) / (0,0,1 / 2) ( Wyckoff position 2a) and (1/3, 2 / 3.3 / 4) / (2 / 3.1 / 3.1 / 4) (Wyckoff position 2d). It is therefore also called the double hexagonal closest packed (dhcp) structure. Praseodymium or curium are elements that crystallize in this type of structure.

Many crystal structures with a predominantly ionic bond type are based on the closest spherical packing of some of the ions and the storage of the other ions in the gaps. If these intercalation ions are too large for the gap, the spherical packing is deformed accordingly. The type and extent of this deformation depend on the size ratio of the framework ions to the intercalation ions. For some stoichiometries there are relationships to calculate so-called tolerance factors from the ionic radii. Using these tolerance factors, predictions can be made about the structure and behavior of the respective system. A well-known example of this is the perovskite structure.

As Polytype crystals are called, which have a stacking sequence with a long repeating unit. Examples are zinc sulfide (ZnS) with more than 150 polytype shapes and silicon carbide (SiC). Some of these polytypes have extremely large lattice constants. Thus the polytype of SiC with the designation 393R has the lattice constants a = 3.079 Å and c = 989.6 Å.

The body-centered cubic spherical packing (bcc, body-centered cubic ) consists of two repeating layers with the layer sequence ABA ... The coordination polyhedron around the atoms is a cube (CN 8) and a little further away another octahedron (CN = 6) so that the coordination number 8 + 6 follows. This achieves a space filling of 68.02%. This structure type has the number A2 in the structure reports and is also called the tungsten type. The alkali metals , barium , the elements of group 5 ( vanadium , niobium , tantalum ) and group 6 ( chromium , molybdenum , tungsten) and iron crystallize in this structure type.

Packs in other than three dimensions

In 1773, Joseph-Louis Lagrange proved in two dimensions that the hexagonal arrangement is the closest packing of spheres with spheres on a grid. Axel Thue proved this in 1910 (completed by László Fejes Tóth , Kurt Mahler , Beniamino Segre 1940).

The three-dimensional case is the Kepler conjecture, which has since been proven (whereby the case of lattice packings was already solved by Carl Friedrich Gauß in 1831).

In the higher dimensions the problem is largely open. The closest lattice packings are known up to dimension d = 8 in Euclidean space. In this particular Alexander Nikolayevich Korkin and Yegor Ivanovich Zolotarev the densest lattice packings in dimensions 4 and 5 and Hans Blichfeldt addition, in 1934 the dimensions 6, 7 and 8. In almost nothing is known for sure. The famous Leech lattice in 24 dimensions and the E8 lattice (named after the exceptional Lie group E8, whose root system it is) in eight dimensions were often assumed to be the closest packing of spheres, especially after the development of new upper bounds for closest packing by Noam Elkies and Henry Cohn (2003), and in 2016 Maryna Viazovska announced evidence. Dense packing of spheres in higher dimensions are of great importance for coding theory (error-correcting codes).