Hafnium (outdated: Celtium ) is a chemical element with the symbol Hf and the atomic number 72. It is named after the Latin name of the city of Copenhagen , Hafnia , in which the element was discovered. It is a silver-gray, shiny, corrosion-resistant transition metal that is in the 4th  subgroup ( titanium group ) in the periodic table .

Hafnium has very similar properties to the zirconium directly above it in the periodic table . Biological functions are not known, it does not normally occur in the human organism and it is not toxic .

Hafnium was one of the last stable elements on the periodic table to be discovered. The first indication of the existence of another element between lutetium and tantalum arose from Moseley's law found in 1912 . In 1914 Henry Moseley tried unsuccessfully to find the unknown, but according to this law to be expected element with the atomic number 72 in samples of minerals of the rare earths (today lanthanoids ).

In his work on atomic theory published in 1922, Niels Bohr predicted that the lanthanide series with lutetium had come to an end and that element 72 must therefore be similar to zirconium. However, he had in Charles Bury , as he himself stated, a forerunner who, like Eric Scerri , in contrast to Bohr, argued exclusively from atomic theory. Just one year later hafnium was demonstrated: 1923 was in Copenhagen from Dirk Coster and George de Hevesy by X-ray spectroscopy in Norwegian zircon discovered. Further investigation of other minerals showed that hafnium is always contained in zirconium-containing minerals. Jantzen and Hevesy succeeded in separating them from zirconium by repeatedly crystallizing the diammonium and dipotassium fluorides of the two elements. Elemental hafnium could then be obtained by reduction with sodium .

Hafnium, with a content of 4.9  ppm in the continental crust, is not a very common element on earth. In terms of frequency, it is comparable to the elements bromine and cesium and more common than the long-known gold and mercury . Hafnium does not occur naturally and so far only one mineral is known with the main component hafnium, which was discovered in 1974 and named after this as hafnon . In zirconium minerals such as zirconium and allendeite , however, hafnium is often contained as an external admixture, the amount of hafnium usually being 2% of the zirconium content (1-5 percent by weight of hafnium). One of the few minerals that contain more hafnium than zirconium is the zircon variety Alvit [(Hf, Th, Zr) SiO 4 ].

Analogous to zirconium, the most important hafnium deposits are the zirconium deposits in Australia and South Africa . The reserves are estimated at 1.1 million tons (calculated as hafnium oxide). 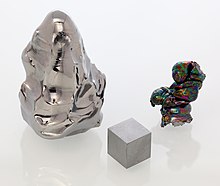 To extract hafnium, it has to be separated from zirconium. This is not possible during the manufacturing process, but takes place in a separate process. Extraction processes are used for the separation . The different solubility of certain zirconium and hafnium salts in special solvents is used. Examples of this are the different solubilities of nitrates in tri-n-butyl phosphate and that of thiocyanates in methyl isobutyl ketone . Other possible separation options are ion exchangers and the fractional distillation of suitable compounds.

After the Kroll process , the separated hafnium can first be converted into hafnium (IV) chloride and then reduced to elemental hafnium with sodium or magnesium .

If even purer hafnium is required, the Van-Arkel-de-Boer process can be used. During the heating under vacuum, the hafnium initially reacts with iodine to form hafnium (IV) iodide . This is broken down again into hafnium and iodine on a hot wire.

Hafnium is only produced in small quantities on the order of 100 tons. It is not produced in-house, but is a by-product of the extraction of hafnium-free zirconium for the cladding of the fuel rods . The USGS gives US import prices for hafnium 453 USD per kg in 2010 and 578 USD per kg for 2013. 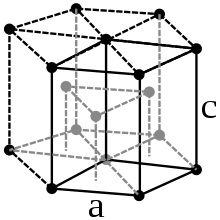 Hafnium is a silvery, shiny heavy metal of high density (13.31 g / cm 3 ). It crystallizes in two different modifications depending on the temperature . In normal conditions it is crystallized in a hexagonal - closest packing (α-Hf) and thus is isotypic to α-Zr, above 1775 ° C it is in a cubic -raumzentrierte structure via (β-Hf).

If the purity of hafnium is high, it is relatively soft and pliable. It is easy to work by rolling , forging and hammering . If, on the other hand, there are traces of oxygen, nitrogen or carbon in the material, it becomes brittle and difficult to process. The melting and boiling points of hafnium are the highest in the group at 2233 ° C and 4603 ° C (melting point: titanium: 1667 ° C, zirconium: 1857 ° C).

The metal resembles its lighter homologue zirconium in almost all other properties . This is caused by the lanthanide contraction , which results in similar atomic and ionic radii (atomic radii Zr: 159 pm, Hf: 156 pm). One exception is the density, at which zirconium has a significantly lower value of 6.5 g / cm 3 . A technically important difference is that hafnium can absorb neutrons 600 times better . This is the reason why the hafnium has to be separated for the use of zirconium in nuclear power plants .

Hafnium is below the critical temperature of 0.08 K superconducting .

Hafnium is a base metal that reacts with oxygen to form hafnium dioxide when heated. Other non-metals , such as nitrogen , carbon , boron and silicon, also form compounds under these conditions. A dense oxide layer quickly forms at room temperature, which passivates the metal and protects it from further oxidation .

Hafnium is stable in most acids due to its passivation under normal conditions. It corrodes quickly in hydrofluoric acid ; noticeable corrosion occurs in hot, concentrated sulfuric and phosphoric acid. Hydrochloric acid - nitric acid mixtures, including aqua regia , should only be exposed to hafnium for a short time, even at room temperature; at 35 ° C, erosion rates of more than 3 mm / year must be expected. In aqueous bases it is resistant up to a temperature of approx. 100 ° C, the material removal is usually less than 0.1 mm / year.

The isotopes 177 Hf and 179 Hf can be detected with the help of NMR spectroscopy .

The core isomer 178m2 Hf is long-lived with a half-life of 31 years and at the same time emits strong gamma radiation of 2.45  MeV when it decays . This is the highest energy that an isotope that is stable over a long period of time emits. One possible application is to use this core isomer as a source in powerful lasers . In 1999, Carl Collins discovered that the isomer could release its energy in one fell swoop when exposed to X-rays . However, possible applications such as explosives are unlikely.

Because it is difficult to extract, hafnium is only used in small quantities. The main area of ​​application is nuclear technology, in which hafnium is used as a control rod to regulate the chain reaction in nuclear reactors . The use of hafnium has several advantages over other possible neutron absorbing substances. The element is very resistant to corrosion and the nuclear reaction with the neutrons creates hafnium isotopes, which also have high absorption cross-sections . Due to the high price, it is often only suitable for military applications, for example for reactors in nuclear submarines .

There are a few other uses. Hafnium reacts quickly with small amounts of oxygen and nitrogen and can therefore be used as a getter substance to remove the smallest amounts of these substances from ultra-high vacuum systems. When burned , the metal emits a very bright light. It is therefore possible to use hafnium in flash lamps with a particularly high luminous efficiency. Several very stable and refractory compounds, particularly hafnium nitride and hafnium carbide , can be made from the elements.

In alloys with metals such as niobium , tantalum , molybdenum and tungsten, an addition of 2% hafnium increases the strength. Particularly stable, high-melting and heat-resistant materials are created.

A single commemorative coin was minted from hafnium: in 2002 a 5 kroner coin from the Turks and Caicos Islands .

Like many other metals, hafnium is highly flammable and pyrophoric in its finely divided state . On the other hand, it is not flammable when compact. The metal is not toxic . For these reasons, no special safety regulations need to be observed when handling hafnium.

Hafnium forms a number of compounds. These are mostly salts or mixed crystals and often have high melting points . The most important oxidation state of hafnium is + IV, but there are also compounds in lower oxidation states, from 0 to + III, and in complexes also negative oxidation states. 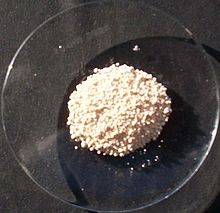 Hafnium (IV) oxide is a very stable and high-melting solid. It has a high relative permittivity of 25 (for comparison: silicon dioxide : 3.9). It can therefore be used as a high-k dielectric to isolate the control connection (gate) for microprocessors . By further reducing the structure widths, leakage currents are becoming an ever greater problem, because the miniaturization of CMOS structures also requires thinner gate insulations. The undesired leakage current increases sharply below 2 nm due to the tunnel effect . By using a high-k dielectric, the thickness of the dielectric can be increased again in order to reduce leakage current, without there being any loss of performance (reduction in the switching speed) of the transistor . Thicker dielectrics thus enable further miniaturization .

Hafnium carbide is one of the substances with the highest melting points. Together with hafnium nitride and hafnium diboride (HfB 2 ) it belongs to the hard materials . Because of its good thermal shock resistance, hafnium diboride is often used as a heating resistor material in the thermoelectric printheads of inkjet printers .